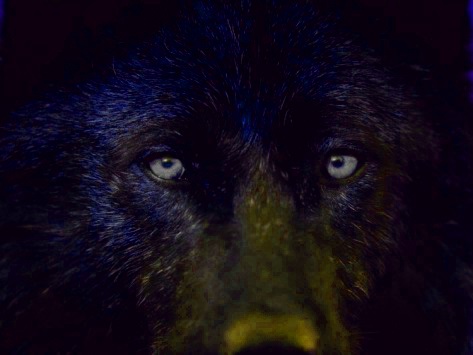 Black Wolf at the Window

“This is so...weird. My sister whom I shared a room with growing up, was utterly terrified of a "wolf at our window" from about the age of 4 years old on. My parents sort of brushed it off as a vivid nightmare, that seemed real to her and an overactive imagination. (This was in the mid 1980's on LI, in NY state) The thing is, she never grew out of it or forgot about it as you'd expect a toddler to do. In fact, she was utterly insistent that it was real, she was awake...and that it happened more than once! She couldn't even stand stories depicting wolves. When The Neverending Story came out on film, a few years into this, Dad barred her from watching it altogether, because of the talking black wolf scene. She described this 'entity' as a wolf standing at the window of our bedroom staring inside. She said it was able to speak to her, and knew her name. At one point she insisted I had seen it, too, and demanded to know why I was lying about it to mom and dad. I truly have no such recollection.

When she failed to outgrow the 'monster fears' our father even took her outside the bedroom window and demonstrated to her that it was first floor but more than 8 feet off the ground --- impossible for him, a full grown man, to stand and look through without a ladder. He also told her (again) there weren't even coyotes on LI, let alone "wolves". She didn't believe him. He then took her to the Ecology Center (kind of a Parks Dept nature center open to school groups and the public) to talk to a ranger that told her the same thing. I'd forgotten about this until running across these "dogmen" vids you posted. I feel bad I never really believed her, now. No one even thought about a UFO/alien connection at the time, so this isn't a story ever reported to any such investigation group, btw."

In a large, tin-roofed warehouse near Colorado’s Rocky Mountains, members of a team of modern space warriors spend their days hatching plots to defeat the US military in extraterrestrial combat.

Their job is to act like the enemy during mock space battles to help US units prepare for a conflict that may one day extend into the cosmos.

“We play the bad guys,” said Captain Christopher Barnes, chief of training for the 26th Space Aggressor Squadron. “Our job is to not only understand the different types of threats and potential enemies, but also to be able to portray them and replicate them for the good guys, our Air Force.”

The 26th and 527th Space Aggressor Squadrons are headquartered in a two-story warehouse at Colorado’s Schriever Air Force Base, stocked with advanced radio and satellite equipment and nicknamed “the barn.” Behind the building, antenna dishes trace the sky.

While attacks by the Space Aggressors are simulated, senior US military and intelligence officials warn the threat in space is very real. Read more at ‘Space Aggressors’ Train US Forces for Extraterrestrial Conflict 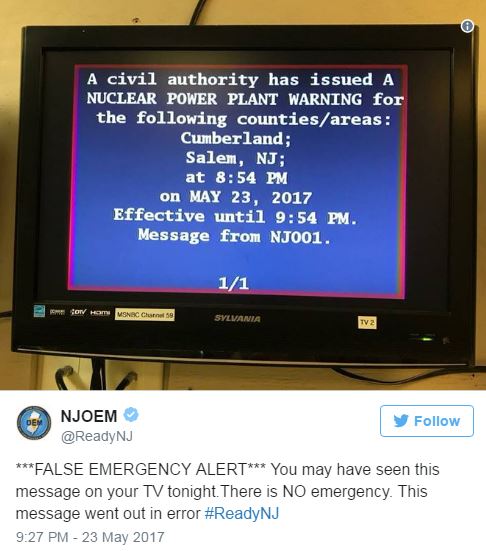 A false alarm that went out to some people’s television sets Tuesday might have scared some in New Jersey.

A nuclear power plant warning issued in Cumberland and Salem counties was sent out by mistake.

The message that was sent out said “a civil authority has issued a nuclear power plant warning for the following counties/areas.”

A short time later, the New Jersey Office of Emergency Management Tweeted that the emergency alert was “false.”

It said that message went out in error.

Denver police have arrested a man who was wearing clown makeup when he allegedly stabbed and slashed a 29-year-old man to death with a glove that had blades attached to the end of each finger.

Christian Lee Gulzow, 36, allegedly attacked the victim at 12:49 a.m. Tuesday following an argument near Torchy’s Tacos at West 11th Avenue and Broadway, according to an arrest warrant affidavit.

Witnesses told police that the suspect, wearing white clown makeup accented with black streaks on the face, suddenly began threatening the victim with a glove with blades that were 2- to 3-inches long. They were near the Corner Store at West 10th Avenue and Broadway.

Gulzow began pummeling the victim, who tried to dodge the blows, the police report says. The victim eventually punched the suspect, who then yelled at the victim and followed him to Torchy’s. The two were the only ones in the restaurant parking lot.

“The victim collapsed in the north east parking lot of the Torchy’s business,” the report says.

The Ghostly Bear-Monster of London


Aliens: The World's Leading Scientists on the Search for Extraterrestrial Life

America's Top Secret Treaty With Alien Life Forms: Plus The Hidden History Of Our Time

Evidence of the Gods: A Visual Tour of Alien Influence in the Ancient World

This newsletter is licensed under a Creative Commons Attribution-Noncommercial-No Derivative Works 3.0 United States License.
Hotlinking of PM Media images and copyrighted material is strictly forbidden unless permission is obtained.
'Phantoms and Monsters' and 'phantomsandmonsters.com' is protected under the Lanham (Trademark) Act (Title 15, Chapter 22 of the United States Code)
'Phantoms and Monsters' was establish in September 2005 as part of PM Media
Copyright 2005-2017 Phantoms and Monsters / PM Media - All Rights Reserved
Lon Strickler at 2:36 PM
Share
‹
›
Home
View web version