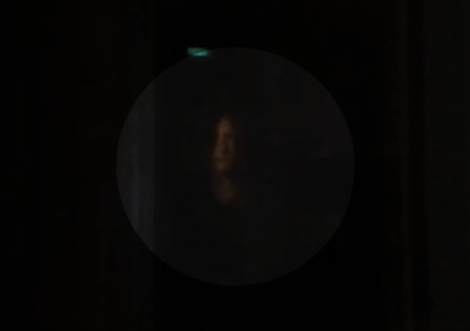 Despite looking like a homemade computer graphic, a US-based paranormal investigator claims the clip shows the clearest footage of a spectre ever recorded.

The anonymous ghost hunter, who posts grainy looking videos to YouTube channel Fantastic Daily, claims he lured the ghost to his property, reports the Daily Express.

Infamous urban legend the Black Eyed Kids are said to be creatures with pale skin and black eyes who abduct their victims.

The search is continuing for a missing private plane after it disappeared off the radar in the Bermuda Triangle area near The Bahamas.

There are reports debris has been found in the area since the plane's disappearance.

High profile New York CEO Jennifer Blumin and her two sons, aged four and eight, were on the plane as well as the pilot who has been named as Nathan Ulrich.

The plane departed Borinquen, Puerto Rico, at approximately 11am local time on Monday and never made it to its destination of Titusville, along the northeast coast of Florida, AP reports. Read more at Private plane carrying New York family missing in Bermuda Triangle region

Orillia, Ontario, Canada - 2016-06-19: I was on my front porch at 4am in the summer of 2016. I was staring at the night sky. Was way way up. I could see clear as day between the parting of a little bit of clouds a brown dragon. It was slowly moving/flapping it's huge wings flying across the sky - MUFON

Whether is believable or not to you I beg you for help. I do not know when did they got into my head. I hear them all the time and hurting me physically and emotionally keep asking for traveling on time. It's been years and they just won't leave me alone could be said 28 November 2014 when someway started. Please I need your help.

For more details contact me and my family ASAP with the help it is for real.

Please tell me how to stop their telepathy. I've been thru lots. I am a mom and wife. I want this to stop so I beg for the answer of how I can make it stop the telepathy - MUFON

Wild boar are taking over Rome, attracted to the Italian capital by mounds of rotting rubbish.

In March, a 49-year-old man was killed when his scooter crashed into a hungry boar prowling the city’s streets. Last month a family of boar invaded an elementary school’s garden hunting for food. And a massive boar was recently caught on video running in traffic near the Vatican.

Italy’s boar population has rocketed to an estimated 1 million after a bigger, fast-breeding type was imported from Eastern Europe in recent years for hunting. A boar can now fetch 500 euros (about $550) on the open market.

But the downside of the population explosion of these omnivores is becoming obvious, as they spend more time in the metropolis in search of ways to sate their rapacious appetite. Read more at Trash-Strewn Rome Besieged by Wild Boars; Man Dies in Tragedy

A Mysterious Death at the Bottom of the World

Netherlands Bigfoot?...consider the source. (I believe I had seen this video several years ago. I thought it was crap then. Lon)


From Deep Space with Love: A Conversation about Consciousness, the Universe, and Building a Better World

Aliens: The World's Leading Scientists on the Search for Extraterrestrial Life

This newsletter is licensed under a Creative Commons Attribution-Noncommercial-No Derivative Works 3.0 United States License.
Hotlinking of PM Media images and copyrighted material is strictly forbidden unless permission is obtained.
'Phantoms and Monsters' and 'phantomsandmonsters.com' is protected under the Lanham (Trademark) Act (Title 15, Chapter 22 of the United States Code)
'Phantoms and Monsters' was establish in September 2005 as part of PM Media
Copyright 2005-2017 Phantoms and Monsters / PM Media - All Rights Reserved
Lon Strickler at 1:44 PM
Share
‹
›
Home
View web version