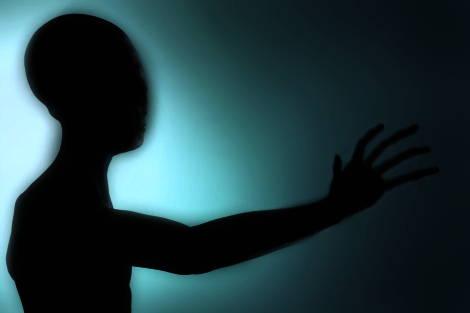 Columbus, OH - 2017-03-31: I was half asleep and woke up slightly. Was able to see the figures surround my bed and I was unable to move with sleep paralysis. Long appendages, dark outlines of what looked like odd shaped humans. Long fingers. I was trying to move and about (what felt like an hour and fifteen minutes) I became unstuck out of the sleep paralysis and threw my body forward in an attempt to scare whatever they were away and by the time I flung upwards they were gone. Did not see any mode of transportation but has effected me psychologically since the occurrence. Unable to sleep, dreams of the encounter etc... was not a dream. I was unable to look at the clock due to the paralysis and I have had no history of sleep paralysis or dreams like this of any kind. I am convinced I was visited and studied to some degree by whatever surrounded me. It felt like I was under some sort of spell. - MUFON

'I tried communicating with it...'

Waynesville, MO - 2016-03-31: I woke up around 2:30 am by flashes of white light. at first, I thought it was lightning from a storm since the flashes were so sudden, but there were no storms that night. I turned over and saw a gray alien who stood at 4 feet tall (estimated) next to my bed. My room is very dark at night, so I could only see its face (alarm clock's light) and not the rest of it. The gray alien seemed curious to see me. I tried communicating with it, but somehow couldn't and just went back to sleep. I was able to move during the time, but I felt weak. About 5 minutes later, I saw a few flashes of white light, looked again, and the gray alien was gone! - MUFON

Spring Creek, NV 2008-06-16: This event took place when I was about 15 or 16 years old living in Spring Creek, Nevada. Its a very small town about 10 miles from Elko, Nevada. I was staying at my friend's aunt's house and that is where I was living at the time. I slept on the couch in the living room normally because there weren't enough rooms at her house. One night I woke up at 3am for no reason. I looked right into the kitchen from the couch and noticed the time. Then, I swung my head to my left and instantly jumped and froze with fear as I noticed the living room door was open so wide it was touching the wall and standing in the living room doorway were three, four foot tall beings with heads too large for their bodies. One was standing in front and the other two were about 1 foot behind the front one and on the left and right side. There was a light coming from behind them shining through the door that was a white color with a tint of light blue. I was unable to make out their facial features due to the lighting coming from only the back of them but there was no question they were there standing clear as day. As soon as I noticed them and jolted from fear the front one zoomed over to me on the couch. I didn't notice how it moved because it was so quickly standing over me as I remained laying there. I looked up at it and of course my adrenaline was pumping. I felt a little hand rub my cheek in a comforting way and in my head I instantly told myself "it's okay." Not even kidding the second it touched my cheek my adrenaline stopped and heart rate went back to normal almost instantaneously which I still don't know how that is even possible. It's like it controlled my emotions by touching my cheek. The feeling I got when it touched my cheek was overwhelming love and comfort and happiness. It's like it was telling me to not be worried and it meant no harm. The weirdest thing is that I even looked up at it and smirked with comfort and new it was okay to go back to sleep. Who would go back to sleep with some foreign being standing right above them? The whole encounter lasted only but 30 seconds or under.

I am now 26 years old and ever since then I have had roughly 5 to 6 UFO sightings that are undoubtedly UFOs based on them defying all physics. The first UFO I had witnessed was with about 8 other strangers at a gas station in the same small town and I was about 15 or 16 as well. I just can't recall if it was before this encounter with extraterrestrials or after. I still have a never ending curiosity and still feel blessed to have had the experiences with extraterrestrials that I have. I am sitting at work at this moment and felt compelled to share this with you all even though it was so long ago. Feels great to make other aware that they are not alone and I too know what is out there. - MUFON

Hey folks...would you like to become a research colleague? If so, I am gathering thoughts and analysis from my readers & friends on the subject of 'alien beings.' Personal encounters & abductions are particularly needed. Your information will be attributed to you (if you wish) in an article and possibly as a part of an upcoming book. These are the questions I would like to ask for your opinion:

- If you believe non-terrestrial beings exist, what do you think they are?
- Where do they come from?
- How do they get here?
- Are alien abductions a reality?
- Why are these abductions occurring?
- Have you ever had an encounter? Could you detail the incident?
- Do you know other people who claim that they have had an encounter? Could you detail what you were told?
- To what extent is the government suppressing information from the public?
- Please feel free to offer any further information that is pertinent

Thanks for your time and assistance...Lon

Catfish falls out of the sky, lands in Florida couple's pool

Why the Titanic Still Fascinates Us

This newsletter is licensed under a Creative Commons Attribution-Noncommercial-No Derivative Works 3.0 United States License.
Hotlinking of PM Media images and copyrighted material is strictly forbidden unless permission is obtained.
'Phantoms and Monsters' and 'phantomsandmonsters.com' is protected under the Lanham (Trademark) Act (Title 15, Chapter 22 of the United States Code)
'Phantoms and Monsters' was establish in September 2005 as part of the PM Media
Copyright 2005-2017 Phantoms and Monsters / PM Media - All Rights Reserved
Lon Strickler at 5:13 PM
Share
‹
›
Home
View web version