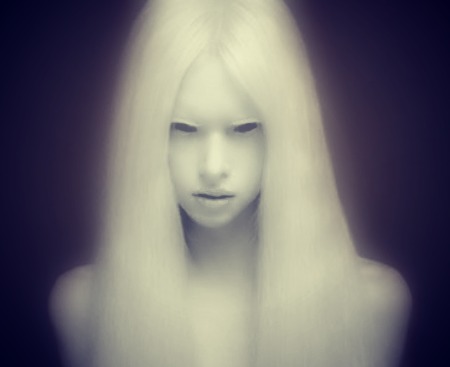 It was a cold evening, I had my 2 nieces with me...one was 6, the other 8. I had gone to our family cabin, waiting on my sister to return from town. The evening started about 7pm, we didn't have a key to the house. We waited for a couple hours, the girls eventually fell asleep in my truck. As the night grew later, the temperature also dropped. I fell asleep as well. I woke around 9:30pm, it was very cold in the truck. I started the vehicle. As I depressed the brake pedal to start the truck, I noticed in the side mirror a face looking at me from the glow in the tail-light. I hesitated to look at first, but gathered enough courage to look. I saw a white face, with long grey/white hair, black eyes, looking at me. I freaked! Once I started the truck, I sped off... headed to the highway, not sure if what I saw was following us. It was! I felt as if it jumped into the bed of my truck. I turned west to head towards a town called Ganado. I went as fast as I could to my parents house. Upon reaching the turnoff, I noticed it jump out of the truck, and run along the right-of-way fence. As I pulled up to the house, I quickly carried my nieces inside. Once inside, I situated the girls for bed. Later that night, I dreamed I walked about 2 miles, to my aunt's house. No one was home. As I walked back home, I noticed this "thing" paralleling me. I quickly ran home, went inside and locked the door behind me, and went to bed. As I woke the next morning, I noticed sand and dirt at the foot of my bed. I told my parents of what had happened, and of what I had dreamed. They took me to a medicine man, and he told me that I ACTUALLY sleep-walked to my aunt's house, and when I entered the house, it followed me in! Totally freaked me out! 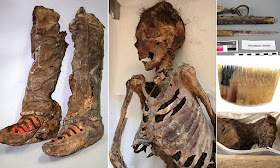 Intriguing new details have emerged about a medieval mummy known for her 'Adidas' boots - which she wore more than a millennia ago.

The body of the woman was discovered a year ago this week in the Altai mountains region of Mongolia.

And her body and possessions remained so remarkably preserved that experts are still uncovering some of the secrets they keep.

Now, scientists have discovered that the mummy suffered a significant blow to the head before her death. Read more at Mongolian woman mummy buried a thousand a years ago wearing 'ADIDAS boots' and with a knife that's still shiny died after a massive blow to the head

A 'burning witch' is filmed taking off and flying away


The Bigfoot Book: The Encyclopedia of Sasquatch, Yeti and Cryptid Primates

A Menagerie of Mysterious Beasts: Encounters with Cryptid Creatures

This newsletter is licensed under a Creative Commons Attribution-Noncommercial-No Derivative Works 3.0 United States License.
Hotlinking of PM Media images and copyrighted material is strictly forbidden unless permission is obtained.
'Phantoms and Monsters' and 'phantomsandmonsters.com' is protected under the Lanham (Trademark) Act (Title 15, Chapter 22 of the United States Code)
'Phantoms and Monsters' was establish in September 2005 as part of PM Media
Copyright 2005-2017 Phantoms and Monsters / PM Media - All Rights Reserved
Lon Strickler at 6:33 PM
Share
‹
›
Home
View web version