Daily 2 Cents: The Night Hillsborough, NH Was Invaded! -- Strange Apparition in the Bay of Quinte -- Implant 'Activated' After Abduction 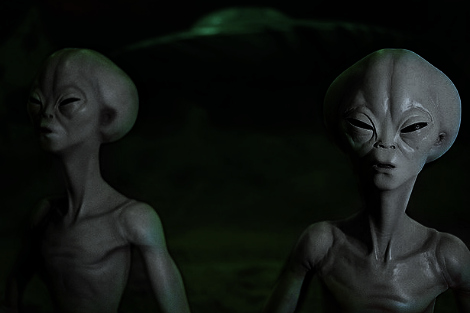 The Night Hillsborough, NH Was Invaded!

This incident occurred in Hillsborough, NH, when I was attending over-night summer camp when I was about 10 years. It would have been in July or August of 1978 or 1979.

One night, in the middle of the night, I awoke quite alert for no apparent reason. It was pitch black in and outside of the cabin. Besides feeling very alert, not sleepy at all, I felt an instinctive fear.

Then I heard two things "talking" outside the cabin. I would say they were very close, maybe 5 or 10 feet away. They were not human beings because the sounds they were making were not human sounds. On the other hand they were not animals because they were definitely communicating in an intelligent way, there was no mistaking it - questioning and answering. You need to read to the end of my entry to understand why I am reporting this as an ET encounter.

I don't think at the time I had seen any UFO movies. My initial response was a primal fear of the unknown.

After several minutes of laying on my back paralyzed by fear, I gathered my wits and decided to climb up to the top bunk and wake up my best friend.

As slowly and quietly as I could, I slipped out of my sleeping bag and climbed up the ladder to his bed. Then, I gently nudged him at the same time whispering in a hushed whisper, "John, wake up, "shhhhh" just listen".

He woke up, he listened, and he heard them too.

We just listened, frozen, for what was probably only a half a minute more. Then one of us whispered something to the other and the voices outside went silent.

John and I froze again and were silent.

We waited for several minutes, listening for them, wondering if they were still there. Finally, after some time, reassured that they had probably left, we started whispering to each other again. Though we did not use the words at the time, the conversation was along the lines of 'WTF????' We were freaked out.

It took another half hour before I was comfortable enough to climb back down to my bed and go back to sleep.

In the morning we reported the incident to our counselor. he told us it was probably porcupines. Of course we knew it was not a porcupine or any animal, but you can imagine he did not pay any attention to us.

The clincher to this incident is that a week later I received a letter in my camper mailbox from my father. This was way before email or cell phones, I had no daily communication with my father. In the letter he had enclosed an article he had cut-out from a newspaper (Boston Globe?). The headline was something like: Hundreds Spot UFOs Over Small New Hampshire Town. (Hillsborough). It had occurred the same night as our incident.

I tried once in recent years to find the article in the Boston Globe microfishe at the Boston Public Library but I couldn't find it. It must have appeared in NH newspapers at the time too. - MUFON

Strange Apparition Seen in the Bay of Quinte

Breaking news: I'm pretty sure there is a Loch Ness type of Monster in the Bay of Quinte. I know this because I saw it, about 60 feet off the shoreline. What looked like a head protruded I'd say about a foot out of the water. There was a gap of about three feet, then a body laying on the surface, like that of a very large snake. Binoculars did nothing to solve the mysterious appearance. Regular reader of the column (if they exist) know that I have had eye problems. Anyway, I wrote if off as floating wood, a common site this time of year when the water level is high. There's only one problem with that – I did look at something else for a few minutes and when looked again, it was gone. I recounted this vision to the stalwart Mary Lou. “You are imagining things,” she said. “It was just sticks.” This throwaway line was as vexing to me as the vision. “I am not imagining things,” I countered. “If it was a couple of sticks, why did they disappear? And why would a stick protrude 12 inches out of the water?” Mary Lou would not believe. “Well, maybe it was that muskrat that comes around sometimes,” she said. Really? “Well, it was at least five times the size of the biggest muskrat in world history,” I countered. Mary Lou remained unconvinced. “Maybe it was a moose,” she said. “No antlers,” I said. “You're dreaming,” Mary Lou declared. After that remark, I was dreaming, but not about sticks or muskrats or Loch Ness Monsters. “I'm telling you, it was something very different and alive,” I replied. She just looked at me with that smug little smile on her face that people give you when they are prepared to indulge your fantasy because obviously reason will not work. But I know what I saw and I saw what I know, and I know I saw a beast the size of a huge snake. God only knows how long the body was that lay submerged between the head and the three feet of body on the water surface. I think that was the tail, as big around as a telephone pole. Doubt me if you must, just like Mary Lou. But when the Lower Trent Conservation Authority reports that someone let loose an Amazon anaconda into the bay and it is terrorizing boaters and swimmers, I will be vindicated.

Edmonton, Alberta, Canada - 2017-04-21: I was looking out the window and saw a starlight looking object. I thought it was the moon but it was cloudy out it looked like a white ball of light.

After I stopped looking at it I felt very sleepy so I stayed up a little bit then went to bed. I remember waking in some sort of craft-like object. They looked to be mantises and grays. They were making a clicking sound. One Gray walked in, he looked to be important. He was wearing coveralls and the others were wearing nothing. The others were scaly-like dragon scales. The scaly ones had a scalpel looking thing. They clicked there tongue loudly and I fell asleep. I woke up in my bed with a pain in my arm. I did not feel anything in my arm but the light showed up again tonight and my arm started tingling like it fell asleep but only in one spot. -
MUFON

Lost City of the Wichita Nation Found in Kansas


The Synchronicity Key: The Hidden Intelligence Guiding the Universe and You

The Genesis 6 Conspiracy: How Secret Societies and the Descendants of Giants Plan to Enslave Humankind

365 Days of UFOs: A Year of Alien Encounters

This newsletter is licensed under a Creative Commons Attribution-Noncommercial-No Derivative Works 3.0 United States License.
Hotlinking of PM Media images and copyrighted material is strictly forbidden unless permission is obtained.
'Phantoms and Monsters' and 'phantomsandmonsters.com' is protected under the Lanham (Trademark) Act (Title 15, Chapter 22 of the United States Code)
'Phantoms and Monsters' was establish in September 2005 as part of PM Media
Copyright 2005-2017 Phantoms and Monsters / PM Media - All Rights Reserved
Lon Strickler at 11:56 AM
Share
‹
›
Home
View web version