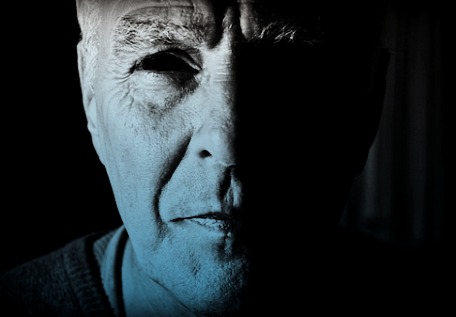 'It was a terrible experience'

I used to own an occult book shop about 8 years ago. The checkout counter faced opposite the store entrance. It was around noon, and there were a few customers checking out. My employee and I were helping customers when I noticed a man in a light sweater walk into the store. He looked normal, but was looking down in front of him. After he entered and walked a few steps towards the book shelves, he lifted his head a bit and I caught a glimpse of the side of his face. He then turned his head and looked directly at me, like he knew I was watching him. His eyes were as black as night! I was shocked and I just stared at him. I felt as if I was hit with a bolt of electricity and my knees weakened. My employee noticed my condition and literally grabbed me before I fell to the floor.

I told her I was OK...that my blood sugar may have dropped and I needed to get something to munch on. I turned my back and walked to the small table behind the counter. But then I heard my employee say 'excuse me sir.' I quickly turned and noticed the black-eyed man standing behind the counter and only a few feet from me. He stared directly at me, not saying a word. I was so frightened and suddenly ran towards the stairs and up into my office, hoping he'd not follow. I heard my employee tell him that she would call the police if he didn't leave. I remained in the office for several minutes. My employee walked half way up the stairs to check on me and I asked if he had left. She said that he was gone...I told her to close the store.

It was a terrible experience and I literally feared for my life. I haven't seen any other black-eyed people since then...but I was so affected by that encounter, I decided to sell the business soon afterwards. I just can't explain why I did so, but I feel it was important to not be there any longer. NK

Easter comes with a bit of a twist in Costa Rica, with the traditional egg hunt replaced by the somewhat more bracing activity of crocodile hunting.

Every year the "Lizard Men" of Ortega, a town in the country's west, wade into the local waterway and, armed only with wooden staffs, strive to flush out a prehistoric beast.

Video of the practice shows the men beating their sticks in neck-deep water while a sizeable crowd cheers on the bank, with the cheerfulness of the occasion belying the very real threat of a gruesome demise.

Having managed to drive a croc into the open – and avoid dismemberment – the "lagateros" then wrangle and truss the dangerous reptile.

"This time everyone could tell how hard it was," Lizard Man Jaime Sanchez told RT. "The people saw it in the river in the net, they saw how we had to fight with the animal in order to get it here."

As the news service reports, the captive then becomes a "guest of honour" at the Easter festival, recalling hundreds of years of culture.

"It’s also because it's a tradition."

Thankfully not all aspects of the tradition have been maintained over the years, however, with the crocodiles released unharmed back into the river once the proceedings are through. - Costa Rica's Lizard Men snare a monster on Easter croc hunt

Las Cruces, NM - 1982-10-11: The first awareness was when I stepped out of my van and noticed a bright greenish light at the street near my trash cans. I thought 'when did the city put a light there?' The next thing I remember was a very bright light.. then I was standing on the right side of the van looking down the street at a glowing ball with flames coming out. Like a tail and floating slowly away to the north east.

When I entered my home I was greeted by my wife and kid and they all asked what took me so long to come in the house. They said that they heard me drive up about 20 min. ago. I tried to tell them what I saw but the words would not come out and the thought would leave me. This went on for about 7 years.

I am now retired and 76 years old. At the time I was 42 years old and a business man in this town...well respected and this area. I also have contracted with WSMR as camera and lab tech. - MUFON 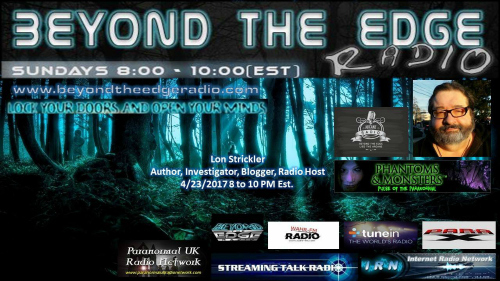 This week on BTE Radio we're joined by Phantoms and Monsters Blogger, Author, Investigator and Host of Arcane Radio Lon Strickler. During the first half hour Eric and Marie will be discussing the latest Paranormal News and Paranormal TV show reviews. Then at 8:30 we're joined by Lon Strickler to discuss some of the strange cases Lon has received and is currently working on. Lon always has great stories and cases to share and this is one show you won't want to miss.

I'm Back and People Are Still Seeing Black Panthers

Keepers of the Garden

The Extra-Dimensionals: True Tales and Concepts of Alien Visitors

This newsletter is licensed under a Creative Commons Attribution-Noncommercial-No Derivative Works 3.0 United States License.
Hotlinking of PM Media images and copyrighted material is strictly forbidden unless permission is obtained.
'Phantoms and Monsters' and 'phantomsandmonsters.com' is protected under the Lanham (Trademark) Act (Title 15, Chapter 22 of the United States Code)
'Phantoms and Monsters' was establish in September 2005 as part of PM Media
Copyright 2005-2017 Phantoms and Monsters / PM Media - All Rights Reserved
Lon Strickler at 12:39 PM
Share
‹
›
Home
View web version