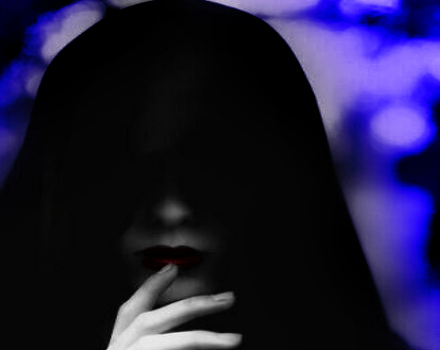 I following account was forwarded to me from a colleague:

I'm from east Long Island, NY and single. One night last summer I was lying in bed unable to sleep when a very bright white light entered the room. Then several humanoids appeared my bedroom and stood by my bed. These beings were about 4-foot tall, wide in the torso, with large heads, large black eyes, no ears, or hair with dark bluish-grey skin. Their hands were very wide with thick fingers and nails. They wore white robes down to the floor. They asked to come with them and I followed them down to the street. There I saw a group of women, maybe 2 dozen or so, slowly walking down the street. All appeared to be in a trance and were going in the direction of the beach. I also felt drawn to the water. When I got there, I observed 4 brightly lit disc-shaped objects hovering over the surface. A tall beautiful female with pale skin and wearing a long flowing black hooded robe appeared in front of me. I was called by this being and asked to conduct a 'test.' I soon found myself standing by the foot of my bed with the stocky beings attempting to stick me with a long needle. It was inserted into my upper chest and an opaque yellow liquid was extruded from me. I remember waking mid-morning with a terrible headache. I have no idea why this occurred. I couldn't find any marks, but I do experience intense dizzy spells and have problems eating some days. JN

Brad in Cambodia called in to tell of a 'shadow man' experience he and his girlfriend had:

“I'm originally from Oklahoma but I'm retired. I'm over here with family. I just want to tell a quick story. About 42 years ago, my girlfriend was over and from my bedroom, you could see the staircase leading upstairs. There was a white wall. Well, in the middle of the night I woke up and I was just paralyzed with fear. I could not move. I could not scream. There was a black figure. You could see the head, the shoulders and just a shape and it was blacker than black. It was not against the wall, it was like 3-D and it was weaving back and forth very slowly. Well, the next morning I woke up and I was thinking, Damn, what a strange dream. I had a dream of seeing something in my house. And then my girlfriend goes, Brad, let's get out of here. I saw something last night. Here, I go, You mean the black thing? She said, Yes! You saw it? I said, I saw it. She goes, I couldn't move. I mean, and then... for two people to have the same kind of dream, that's... I don't believe in coincidences. I totally believe in shadow people and the feeling I got was it was not friendly. It was evil... That's my story and I swear. I mean, if she hadn't have said that, probably would have forgot. We went to a local house of shadow shop and they said it could have been a banshee but they didn't know... It was totally terrifying. The worst fear I have ever felt in my life, to be paralyzed like that.”

Followed By Van With No Driver

Oklahoma: Going to work in morning about before 11 am or 10 am. had a feeling recently of being followed or something then saw this. Someone must've said look, a van and no driver. Curtain maybe up so you think he's hid, but we could see no one driving the van. It was fast behind us driving following and when we turned it didn't, it kept going straight ahead. It was an inexpensive van it looked like, but there's no driver. Came up fast behind us several times, then sped off fast going south down the street. So you just see it and others thought it's weird - there's not anyone driving the van, it's a ghost. It just matched our feeling of something following us or something probably after we maybe saw aliens or something around. We thought someone was hid driving but it clearly wasn't. They were talking about it because they thought it was odd to see a ghost car. Clear windows and well lit time of day - it just always sped south down the road - some aliens were following us maybe we felt or something. Forgot really but we had a funny feeling of being followed to work or it maybe was a fantasy or something and then we were followed by something strange like we were thinking about. We're from Texas where strange things happen and you just ignore it .Weathers nice and you just go on - some people are disturbed by missing time and things though- abductions and stuff. - MUFON

An Italian man has been granted a divorce after claiming that his wife was "possessed by the devil".

The woman had exhibited "inexplicable behaviour" since 2007, including fits, stiffening, and other "unusual phenomena", a Milan court heard. Her husband attributed the episodes to "demonic possession".

Her sister, as well as a priest and a Capuchin monk confirmed the strange behaviour, testifying that the woman - a devout Catholic - had at one point knocked over a church pew, hurling it towards the altar using just one hand.

Witnesses even claimed to have seen her levitate, before falling to the ground.

The Milan court tribunal acknowledged that the woman was "clearly agitated" but said she "did not act knowingly", according to Il Corriere della Sera daily.

The judge ruled that the incidents couldn't be attributed to an illness, since the woman was judged healthy following by doctors and psychiatrists. Several exorcists had also attempted to cure her over the years, but to no avail.

The couple, who have two children, were eventually granted a no-fault divorce.

Italy had no provision for divorce until 1970 and the difficulties caused by this were the subject of a celebrated 1961 film "Divorce, Italian Style". The comedy features Marcello Mastroianni as a Sicilian noble who cooks up a plot to kill his wife in a crime of passion so he can be free to marry a younger model.

However, legislation which came into force last year made it easier and quicker to end marriages - prompting a 57 percent surge in the divorce rate.

Now only one year of official separation is necessary before couples can begin divorce proceedings, or six months in the case of a separation by mutual consent. Previously, couples had to be officially separated for three years. - Italian man granted divorce after claiming wife 'possessed by devil'

Discover Mythical Creatures Around The World With Expedia's Interactive Map

The Case for Christ: What’s the evidence for the resurrection?

This newsletter is licensed under a Creative Commons Attribution-Noncommercial-No Derivative Works 3.0 United States License.
Hotlinking of PM Media images and copyrighted material is strictly forbidden unless permission is obtained.
'Phantoms and Monsters' and 'phantomsandmonsters.com' is protected under the Lanham (Trademark) Act (Title 15, Chapter 22 of the United States Code)
'Phantoms and Monsters' was establish in September 2005 as part of the PM Media
Copyright 2005-2017 Phantoms and Monsters / PM Media - All Rights Reserved
Lon Strickler at 1:37 PM
Share
‹
›
Home
View web version