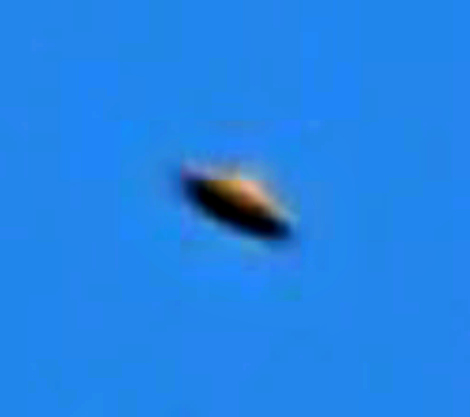 I was sky watching when I spotted a strange object hanging in the sky. I looked through my binoculars and could clearly see it was a in fact a domed saucer. I observed the domed saucer for about five minutes before it started to move. After traveling a shot distance the domed saucer then stopped suddenly and started to emit an orange flash of light before moving off up into the atmosphere and out of sight. Lucky enough I had managed to take a photograph of this incredible saucer. The photograph was taken on the 17th of July 2014, 3:06 pm GMT at Newton Abbot, Devon, England. - MUFON 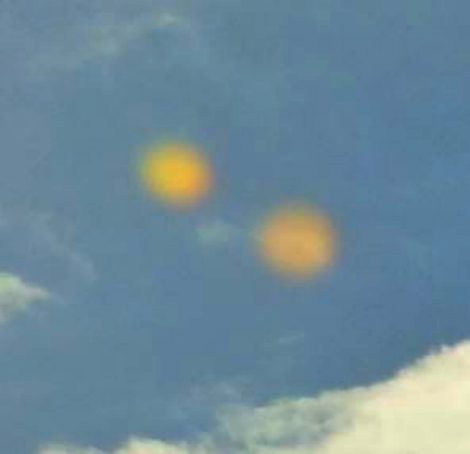 California: I went to bed around midnight on a summer night. I lived in the country and I wasn't asleep yet. I did close my eyes for a few minutes then was abruptly woken by what sounded like military helicopter blades making that low loud sound. I know this sound since my husband used to be in the Army. This sound was low above my roof. I really thought that troopers were going to propel onto my roof shortly. The sound of the blades whooshing with that low slow sound kept me up. I looked out of my bedroom windows trying to see this object but I couldn't see anything. I noticed no tree branches or bushes were moving. There was no wind at all. This sound lasted a good 20 minutes or more. My husband said he did not hear it. I tried to wake him but he was groggy. After this sound stopped quickly. I suddenly ran out my front door in the front yard stepping back to get a good view of my whole house looking up in the sky. Nothing was there just silence. It was a summer clear night out and I could see my house.

The next morning while still in bed on my back I was awoken by severe pain. I turned back my cover. It was very painful also with burning pain. I noticed I had several odd shaped indentation marks that looked pressed in. Within these shapes I noticed pin holes. I quickly grabbed my cell phone and took four photos. I was baffled by the whole thing. I was scared. I couldn't believe my husband didn't hear it. It was so loud I also thought it's going to land on the roof. I will never forget that night. It was so strange. My bed was vibrating during the event. I just remembered. - MUFON (no photos submitted?

Perched in trees and scampering down sidewalks, green iguanas have become so common across South Florida that many see them not as exotic invaders, but as reptilian squirrels.

Native to Central and South America, green iguanas that escaped or were dumped as pets have been breeding in the Miami suburbs and the Keys for at least a decade without making headlines like other voracious invasive reptiles such as Burmese pythons or black-and-white tegu lizards.

They've been considered mostly harmless because they eat plants instead of native animals. But their burrows undermine seawalls, sidewalks and levees, and they eat their way through valuable landscaping as well as native plants. Their droppings can be a significant cleanup problem, as well as a potential source of salmonella bacteria, which causes food poisoning. Read more at In South Florida, green iguanas spread into suburban scourge 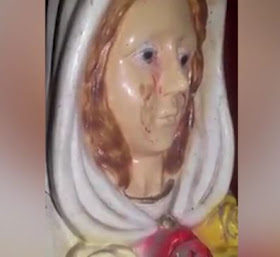 Hundreds of people have been flocking to Argentina to witness what some are calling a modern miracle.

The figurine, which belongs to a family in the country's Salta province, attracted a great deal of attention after its owners revealed on a local radio station that it had been crying tears of blood.

But are the tears really a miracle ? Priest Julio Rail Mendez, who believes that the statue should be properly investigated by the church, has warned that people should not jump to conclusions.

After all, crying statues have been cropping up everywhere over the last few years.

"The first thing the church does is to do a scientific analysis to see if there is a natural explanation," he said. "Only then, the possibility of a supernatural phenomenon is considered."

A news report about the statue can be viewed below. While the dialogue is in Spanish, the footage includes several shots of the figurine itself as well as of visitors flocking to catch a glimpse of it. Read more w/ video at Virgin Mary statue 'crying tears of blood' in bizarre mystery as hundreds flock to Argentina to see 'miracle'

Mothman Sighting in Chicago Just in Time for Documentary

Neil Armstrong and the Men in Black?

NASA May Have Finally Found Conditions for Life Outside Earth

Jupiter Has a Mysterious New Spot

NASA Scientist Says Her Money Is on Europa for Alien Life

Surviving Death: A Journalist Investigates Evidence for an Afterlife

Unacknowledged: An Expose of the World's Greatest Secret

This newsletter is licensed under a Creative Commons Attribution-Noncommercial-No Derivative Works 3.0 United States License.
Hotlinking of PM Media images and copyrighted material is strictly forbidden unless permission is obtained.
'Phantoms and Monsters' and 'phantomsandmonsters.com' is protected under the Lanham (Trademark) Act (Title 15, Chapter 22 of the United States Code)
'Phantoms and Monsters' was establish in September 2005 as part of PM Media
Copyright 2005-2017 Phantoms and Monsters / PM Media - All Rights Reserved
Lon Strickler at 3:59 PM
Share
‹
›
Home
View web version