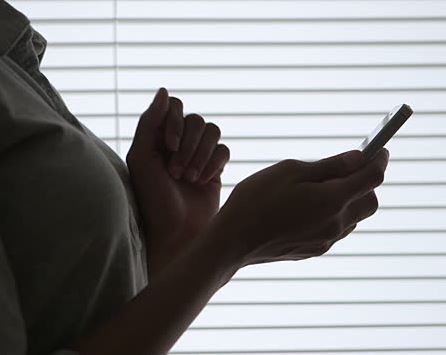 'Mom' Texts From Beyond

I was married to my first wife for 13 years and I have 2 sons and a daughter from that marriage. Unfortunately, my ex-wife got very ill for a few months and lived with my daughter until she passed away 2 years ago. Shortly after her death, my children were stressing out about what to do with her house. They didn’t know if they should sell it as is or try to fix it up to get more from the sale. They had just made the decision after several days of stressing over it and my daughter got a text on her cell phone. It was from “MOM”. It was from her mother's land line and that phone had been disconnected for several months. Needless to say it freaked her out a little but it also seemed to comfort her because she was still grieving.

There was no message but she got the distinct impression that her mom was telling her she agreed with her decision.

A couple of days later she was planting some flowers that were given to her in memory of her mom and couldn’t decide which ones should go where. She finally made her decisions and within minutes her cell beeped and she had another text from “MOM”.

One of the things my ex-wife had always wanted to do was to visit her home town in Connecticut but never got there. She always talked about the great memories she had in her early years and wanted to see the harbor and the ocean again. When she passed away she was cremated and my children wanted to take her ashes back to her home town and drop them in the ocean. My wife and I wanted to go with them and we made it a 2 week driving vacation through New England.

When we arrived in her home town several of our group wanted to go parasailing. They got the idea to take her ashes and drop them from the boat during that event. My daughter, her husband and I waited for them in the car. My daughter had received several texts by this time, always right after a significant event so we were actually discussing that while we waited saying how cool it would be to get a text. A short time later my daughters phone beeped and you guessed it, she got another one.

All together she got approximately 12 texts over a period of about 3 to 4 months. She was at the AT T store asking about a problem with her phone when she decided to ask them if it was possible to receive these texts. They had no explanation for them and my daughter left the store feeling even more like they were messages from her mom but she also felt like she had somehow betrayed her mom by questioning them.

She never got another text from her mom and is very sad. GT

Woke Up Wearing Someone Else's Clothes

Cleveland, UK - 2017-02-16: First of all I think it's important to emphasize that I do not take drugs nor do I consume alcohol.

I went to bed at around 1:30 am and watched TV and I was alone in the house as my family were in Scotland. I'm usually a poor sleeper so toss and turn through the night in bed. I woke up at around 4:20 am and do not remember either falling asleep or attempting to fall asleep. I noticed I was half on half off the bed and had parts of my clothes torn but realized the clothes I had on were not my own as I only wear t-shirts and jogger bottoms and hardly wear socks but I had on a checker shirt with 5 buttons missing and had socks on that were not my own also I only wear boxer shorts these were under pants that I had on. I also noticed a scab under my hair that was not there before and also noticed a scar running length ways across my abdomen and a red quarter inch circular scar on my left shin. as with all people we know every part of our bodies so when there is something unusual we notice it immediately.

I don't know what to think about this I don't remember anything my family want me to under-go hypnotic regression as I'm told this is usually what people do under circumstances like this and I'm also told that people who have been abducted or suspected abduction have nightmares - this is the case with me. I will inform MUFON if I under-go hypnotic regression and what transpired. I can not recall or account a few hours it's as if I had a general anesthetic and woke up and do not remember anything it's frightening and frustrating at the same time. - MUFON

1. Me and my wife were in the bedroom when we heard a low pitch but still very noticeable humming sound. The sound went on for about 10 minutes before we got up to see what was going on outside. I discovered that my in laws had both been awakened by the sound. we stood outside waiting for the sound and when we heard it the entire sky lit up green for several seconds before fading away. My wife and father in law stood under the patio I stepped out in the yard and during the humming to look up, the entire sky was still green and several hundred feet above my was a extremely bright white light. My wife and I observed this once and my father in law observed it twice out of his window and once from the backyard.

5. Confused and fascinated. I am still waiting hoping the sound and lights will return so I can capture it on camera.

I was on a ridge off of the industrial parkway in Greenup with a friend when we noticed a noise that sounded similar to clapping a laughing right after that within seconds 3 similar shaped objects suddenly appear over a field a few hundred feet away they all glowed a off green color but it dissipated kinda like heat would. We could not come to a logical explanation of what it was one object landed and two other hovered one of the objects just vanished in no direction just disappeared and shortly after the second did the same when they disappeared it sounded like thunder or a bang we watched the other object on the ground we tried taking a picture but the phone went straight to static and as soon as I unlocked my phone the object took off directly straight up and it also sounded like a bang we left immediately towards I64 and by the time we came to the Grayson exit we had to pull over and have had severe nausea and a fever since then my friend went to the kings daughters and I haven't talked to her since then now as I've been typing this I've had diarrhea and a headache - MUFON

HELP KEEP 'PHANTOMS & MONSTERS' GOING STRONG
...or go to Paypal and use my email lonstrickler@phantomsandmonsters.com as the payee.
Donations by mail can be sent to:
Lon Strickler
26 Coachman Ct
Randallstown, MD 21133

Mystery of the 'creepy sound' heard in Plymouth

Illuminati in the Music Industry

ILLUMINATIONS: The UFO Experience as a Parapsychological Event