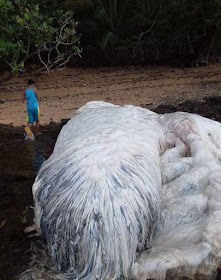 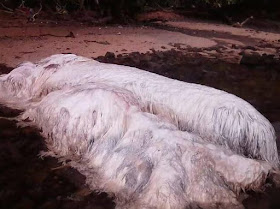 Massive 'Hairy Blob' Washes Up in the Philippines

Pictures of a massive white monster-like creature which washed up in the Philippines have as gone viral on social media.

Locals can be seen posing for selfies next to the mystery sea creatures in Cagdainao, Dinagat Islands.

Several unusual sea creatures have been washing up on the islands following a deadly earthquake last week.

It prompted speculation that the sea creatures are able to “predict” or detect early tremors.

In this case, a massive white creature that appeared to be bleeding appeared on the coast.

UFO sightings have reached an all-time high, according to statistician Sam Monfort.

Monfort collated sightings recorded by the National UFO Reporting Centre, a US organisation that records sightings worldwide, from the beginning of the 20th century.

And there's been a bit of an upward trend...

Interestingly though, Sam has observed that spotting of flying saucers have been on the downturn, despite the rise in sightings over all.

In terms of geography, Sam says that the US seems to be the most prone to UFO sightings all year round.

The States actually report 300 times as many sightings than the the global average, according to his calculations. - UFO sightings are at an all-time high

A couple enjoying an evening stroll along Portreath Beach were left 'mesmerised' and had to flee to 'run home and lock the doors' after spotting a UFO floating above them in the sky.

It is the second reported UFO sighting in just a few weeks, as two women claim to have been left 'shocked' and 'in awe' of a huge UFO they saw in Penzance.

Speaking to UK UFOs about the sighting in Portreath, a woman who gave only her last name, Miss Couzens, said that she was walking along the beach with her partner when events started to take an eerie turn.

Miss Couzens said that she and her partner were watching the ocean, but soon noticed that they could not hear it.

She said that she was walking along the beach with her partner, as it was peaceful.

She continued: "We sat down on the bench by the cafe; as soon we looked at the ocean, we noticed everything went silent - it was an eerie feeling, we felt like we were in a different time zone."

The couple reportedly looked up and realised that hovering over their heads was a huge UFO.

Miss Couzens said: "We looked up and saw this black-shaped boomerang object (that) looked so big that we were sat frozen just staring at this thing. We both were so mesmerised by this. All of a sudden we heard a humming sound and we looked at each other and then all of sudden it disappeared." Read more at Couple 'ran home and locked doors' after spotting a UFO in the skies above a popular Cornish beach 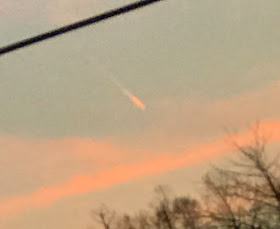 Bel Air, MD - 2/17/2017: It is becoming a daily occurrence to look up in the sky and see something I can't explain. Day by day the air activity is increasing. While I was being drawn to the now familiar hum of a military aircraft I noticed a streak in the sky. At first glance I thought it was a meteor, because of the angle and the regularity of planes now I knew it didn't match up with their paths. On closer inspection while photographing the area, "it" still held a solid line and that exact angle so much I did not think it was any kind of smoke or gases. My best guess would be something was causing the sun and clouds to reflect off of itself. I've seen plenty of triangular craft throughout the years in the area and I believe this could have been connected. I recently watched a video on another site where a person living about 45 min from where I witnessed this posted a video of it. I have included some pictures one of which I edited to bring out the sharpness off lines. - MUFON

Police in UK Respond to UFO Sightings and Alien Abductions

Felines are Fine: New Research Finds No Evidence that Owning a Cat Might Make You Psychotic


Destiny of Souls: New Case Studies of Life Between Lives

Leonard: My Fifty-Year Friendship with a Remarkable Man