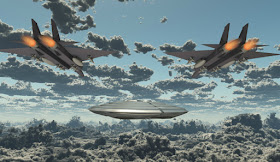 Russian military shot down a UFO before they were attacked and killed by the surviving aliens, it is sensationally claimed in a declassified CIA report.

The shocking report, which includes claims that 23 soldiers were turned into stone by the aliens in the UFO after they transformed into a ball of light, was buried among thousands of declassified files published online by the US intelligence agency.

The report in question, created on March 27 1993, is a translation by the CIA of a report from the Ukrainian newspaper Ternopil vechirniy.

The newspaper report said that after Mikhail Gorbachev lost power in 1991, many KGB files made their way to the CIA, including an alleged 250-page dossier on the bizarre UFO attack, which included pictures and witness testimonies.

The report suggested that a low flying flying saucer had appeared over a military unit in training in Siberia, before one of the soldiers fired a surface to air missile, bringing it down. Read more at Russian soldiers zapped by aliens after shooting down UFO, declassified CIA report claims

Donald Trump’s presidency has cast a pall over the nation, so now witches are casting a spell against him.

A document making its rounds among the witch community is asking people who practice the craft to perform a monthly binding ritual until the president is removed from office.

In order to work, the mass spell must be performed at midnight EST on every waning crescent moon.

The first one is happening on Friday and will be followed by similar spell cast events on March 26, April 24 and May 23 and beyond.

Unless, of course, Trump is cast out of office before then.

Michael M. Hughes, who writes about the paranormal, posted the spell at ExtraNewsFeed last week.

He stressed that a binding spell is different than a curse or hex.

“It’s a restraint, not harm,” Hughes told The Huffington Post. “I see it as self-defense.”

Hughes said he heard that two separate witch groups were planning the spells and asked if he could take it to a wider audience.

The spell instructions have gone viral, and there is a group on Facebook dedicated to answering all the questions people may have.

Performing the spell takes a good deal of dedication, including amassing the following:


Unflattering photo of Trump
Tower tarot card
Tiny stub of an orange candle or orange carrot
A pin or small nail (to inscribe candle)
White candle (any size), representing the element of Fire
Small bowl of water, representing elemental Water
Small bowl of salt, representing elemental Earth
Feather (any), representing the element of Air
Matches or lighter
Ashtray or dish of sand
Practitioners are supposed to prepare for by writing “Donald J. Trump” on the orange candle stub with a pin or nail. They then arrange the other items in a circle and lean the Tower card against something so that it’s standing up.

Hughes suggests reading the 23rd Psalm aloud before beginning the spell by lighting a white candle.

The complete spell can be read here, but some of the lines include:


“Hear me, oh spirits
Of Water, Earth, Fire, and Air
Heavenly hosts
Demons of the infernal realms
And spirits of the ancestors
(Light inscribed orange candle stub)
I call upon you
To bind
Donald J. Trump
So that he may fail utterly
That he may do no harm
To any human soul
Nor any tree
Animal
Rock
Stream
or Sea”
Next, practitioners are supposed to burn the photo with the orange candle, chanting “So mote it be.” But if that sounds a little too “witchy,” Hughes says a simple “You’re fired!” will also work. The spell is completed by burying the candle stub or carrot, or discarding it in running water.

When the ceremony is over, Hughes says it’s crucial to ground yourself by laughing loud and hearty since, “Trump hates people laughing at him.”

He admits the spell has a satirical element, but insists that “doesn’t invalidate it.”

“I’m OK with people calling it a stunt,” he said. “The spell can still be effective. I think it’s already working. Some Christian groups are calling for a day of prayer to counteract the spell. That’s magic, right there. When people do a ritual, that’s changing consciousness.”

As satisfying as a mass spell might seem for Trump detractors, proving it has an effect is another thing altogether.

After all, any bad luck Trump experiences after the spell can be attributed to the spell without being disproven.

Hughes concedes that but think the actual ritual is therapeutic in and of itself.

NOTE: According to my copy of 'Grimore For The Green Witch,' that spell may do the trick! Sorry Donald. Lon

In Greek mythology, the Chimera is a monstrous fire-breathing creature, typically described as having the head of a lion, with a snake as a tail and the head of a goat emerging from its back.

Just as it terrorised the minds of the Greeks, this vision is also the cause of much consternation regarding the successful creation of the first human-pig hybrid embryos at the Salk Institute in California. In fact, such human-animal hybrids are often referred to as “chimeras”.

While this scientific advance offers the prospect of growing human organs inside animals for use in transplants, it can also leave some people with a queasy feeling. It was precisely this queasiness that led to the moratorium on funding for this programme of research.

Given the potential advances that this research offers, our objections should probably be based on more than a mild case of nausea. Yet there are a few enduring aspects to the way we perceive human-animal hybrids that makes it difficult to think about them clearly. Read more at The uneasy truth about human-animal hybrids

Hey folks...this is going to be the only post today. Things to do & people to see. Thanks to those who listened and commented on my appearance on 'Midnight in the Desert'...I had a great time! Lon

More Bizarre Tales of the Men in Black in Japan

Has the Large Hadron Collider Disproved the Existence of Ghosts?...what a crock!

UFOs: “No Explanation Has Yet Been Found”