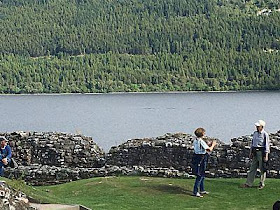 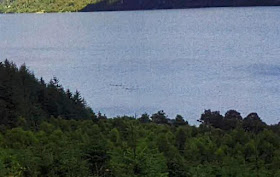 Are There 2 Loch Ness Monsters?

And both photos are in the running for the best photo of the monster taken this year.

Tourist Kevin Smith, 44, used his mobile phone to capture images when he spotted two or three large, dark shapes in the loch near Urquhart Castle.

Local government officer Mr Campbell, of Taynuilt, Argyll, believed the animals he saw could be up to 15 metres long.

Both sightings happened at 3.34pm on August 21.

Gary Campbell, registrar of sightings at Loch Ness, said: “The sightings took place at exactly the same time but 12 miles apart thus raising the possibility of multiple creatures living in different parts of the loch.

“This has never happened before in the 1450-year history of sightings.” Read more at THERE'S TWO OF THEM Loch Ness monster spotted in two places at once for the first time ever

NOTE: I'm very wary of the of the existence of the Loch Ness Monster, though unknown lake creatures may be plausible in certain locations (ex. Lake Champlain). I would speculate that the vast majority of images from Loch Ness can be explained away. Lon 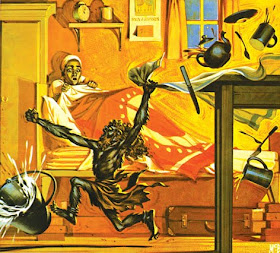 'TOKOLOSHES' are engaging in sex with female teachers at a school in Zimbabwe's eastern Manicaland province, a state-run newspaper has claimed.

The Manica Post reported that the attacks by the tokoloshes started at Chishuma Primary School in Odzi last June and are ongoing.

Two female teachers confirmed the attacks and said a pastor from a local church had conducted prayers to try to get to the bottom of the drama. He did not succeed, apparently.

"Mysterious human-like objects, believed to be tokoloshes are allegedly having forced sexual intercourse at night with female teachers at Chishuma Primary School in Odzi in a real-life drama whose script reads like folklore plucked from Gothic literature," the Manica Post said.

The head of the Zimbabwe National Traditional Healers' Association George Kandiero told the paper: "The solution comes when the people affected find a genuine traditional healer who can cleanse that."

Tokoloshis have been reported before, often in connection with money-making enterprises.

In 2014, a Mutare MP was forced to deny publicly that a tokolosh had been found at his business premises. Three years earlier, the Chronicle said that the demand for tokoloshes (some of them imported from South Africa) was "outstripping supply" in Bulawayo and the eastern city of Mutare. - Tokoloshe 'engaging in sex with teachers'!

A few weeks ago, I first reported on a variety of UFO sightings in non-specific areas of north Lancaster Co. PA, radiating within a few miles from the 40.2513,-76.1366 center coordinates (summit of Tester Mt.). Other UFO reporting agencies have made a note of similar activity, but to a lesser degree. On 2/10/2017 I started to receive reports of 'multiple unknown entities' on the properties of these UFO witnesses. As well, the types of UFOs and the activity on the summit has changed. I will forward any information from the on-site investigators once the evidence has been researched. Lon

My goal has always been to present current alternative news, interesting paranormal events and descriptions of the anomalous world that surrounds us. I also strive to provide astral and intuitive insight for those seeking help. I hope I've achieved this...and I would truly appreciate your kind consideration. Lon

...or go to Paypal and use my email lonstrickler@phantomsandmonsters.com as the payee.
Donations by mail can be sent to:
Lon Strickler
26 Coachman Ct
Randallstown, MD 21133
THANKS FOR YOUR SUPPORT
**********

Who was the abandoned man with no memory?


Terror In The Night I - Alien Abduction Exposed!