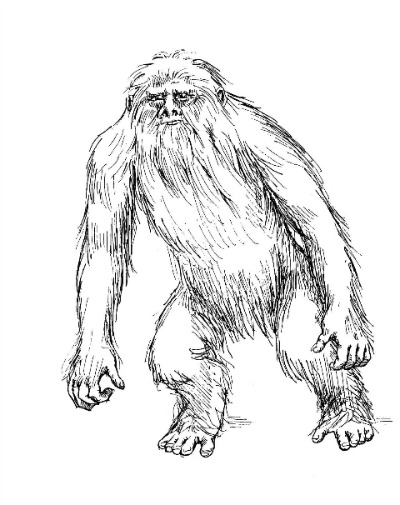 A retired friend of mine who lives here in southwest Missouri was driving on U.S. 24 along the shore of Rice Lake in Illinois at around 2:20 a.m. on the morning of Jan. 10 to visit a close friend who was hospitalized in Peoria.

“I always try to drive at night as much as possible,” he explained in an email he sent less than an hour after his experience occurred. “There is much less traffic and my plans were to get a motel room in Peoria, grab some sleep, and visit my sick friend in the morning. I was driving through an area with a fairly narrow strip of pretty thick woods on both sides and a large body of water called Rice Lake quite close on the other side of the trees to my right. There was almost no other traffic and I had slowed down a little in fear of a deer running out in front of me. Well, something did run out in front of me, but it was definitely not a deer.

“It was obviously a Bigfoot. I knew that as soon as I saw it, but it didn’t look like what I expected one to look like if I ever had the chance to see one. It was well over 6 feet tall, maybe even topping 7 feet, and was covered all over with fairly long hair — maybe four to six inches. But the most striking thing about it was that its hair was white. Actually, it wasn’t snow white, but instead had kind of a slight cream-colored tint to it. I have never heard of a white Bigfoot before.

“It was not actually running, but it’s steps were so long that it was covering quite a bit of ground with each one. It never did turn its head to face me completely, just kind of glanced in my direction as if to make sure I wasn’t too close, but from what I could tell it had thinner hair on its face and looked pretty well like a human. Because of his color, I tried to get a look at the eye color, since an albino of any species usually has pink eyes; these were definitely dark in color, probably brown. Read more at A rare albino Bigfoot spotted near Rice Lake? 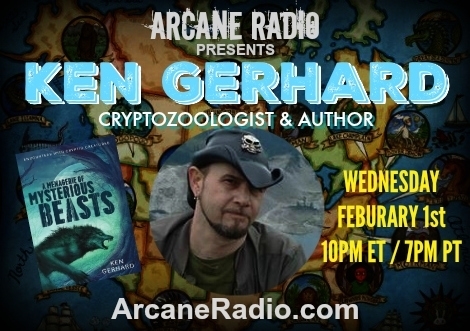 This week we welcome our friend & colleague, cryptozoologist / author Ken Gerhard to Arcane Radio. Ken is a widely recognized cryptozoologist and field investigator for The Centre for Fortean Zoology, as well as a fellow of the Pangea Institute and consultant for several research organizations. He has traveled the world searching for evidence of mysterious animals and legendary beasts including Bigfoot, the Loch Ness Monster, the Chupacabra, enigmatic winged creatures and werewolves. In addition to co-hosting the History Channel TV series 'Missing in Alaska,' Ken has appeared in three episodes of the television series 'Monster Quest' and is featured in the History Channel special 'The Real Wolfman', as well as several other television series . His credits include appearances on numerous news broadcasts and radio programs. Ken is an author and has contributed to trade publications including Fate Magazine. He currently lectures and exhibits at various conferences and events across the United States. An avid adventurer, he has camped along the Amazon, explored the Galapagos, hiked the Australian Outback and has visited many ancient and mysterious sites, from Machu Pichu to Stonehenge. Don't miss this interesting show! Join us on Wednesday February 1st - 10PM ET / 7PM PT - go to www.arcaneradio.com and click 'Listen Live' to listen & chat.

A Menagerie of Mysterious Beasts: Encounters with Cryptid Creatures

25 animals that scientists want to bring back from extinction

The ‘Sierra Sounds’ : Our Most Impressive Evidence for Bigfoot?

UFOs over Nepal? CIA had reported two sightings 49 years ago

Are you brave enough to drive Nevada’s Extraterrestrial Highway?


Remote Viewing UFOS and the VISITORS: Where do they come from? What are they? Who are they? Why are they here?

Dreaming True: How to Dream Your Future and Change Your Life for the Better

Secrets of the Mysterious Valley