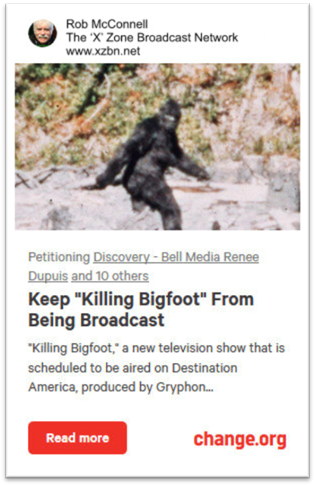 I need your help and the help of as many people that you know to STOP the broadcasting of a US produced TV Show, “KILLING BIGFOOT” that will be airing in the United States and Canada.

The group’s main mission is to assist families - where local authorities cannot - as they are terrorized by a sleeker, more aggressive type of Bigfoot, while also trying to prove once and for all to the scientific community - by killing a specimen - that the creature does in-fact exist.

Help me STOP the Broadcasting of episodes already produced scheduled for broadcast in the United States and in Canada on Discovery, Destination America, Rogers Media, OLN and others. Go to the following link and help me make a difference.

For the past 26 years I have been doing my show, writing my newspaper and hosting TV shows as an ethical professional, without the sensationalism that the majority of others abuse to trick and deceive the public into believing that sensationalism is the norm in the paranormal and parapsychology, which it is not.

Please, sign my Petition and help me make a difference.

If the extraterrestrials are watching and they see what we are doing to unknown or evasive creatures / or unidentified species, what message are we sending to them? How will they see mankind? Will they fear for their own lives - I would have to believe so.

What's next for these TV producers of so called "Reality Shows?"

Please pass this email to as many people as you know - we have to make a difference.

My God, what type of society have we become where killing animals, people and unknown species?

What type of people would want to watch this garbage?

What example are we giving our children?

What type of world will we leave for them?

Thank you for helping me make a difference and hopefully save the lives of our Forest Giants, Bigfoot.


Bigfoot Observer's Field Manual: A practical and easy-to-follow step-by-step guide to your very own face-to-face encounter with a legend

Bigfoot Casebook updated: Sightings And Encounters from 1818 to 2004

Bigfoot!: The True Story of Apes in America