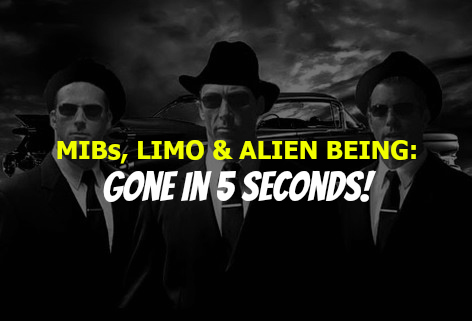 A Youtuber named SunnyAle discusses what she observed when she was a child living in California:

“My sister and I were playing. I was like 7 or 8 years old (around 2002 or 2003) and at the place where I live there is an alley behind my house. It's my backyard that has a door that leads into a garage and this day, the garage door was open, and it could let anyone through the alley – like an alley to my garage into my house. So my sister and I were playing, real quiet, since I didn't have loud neighbors. It was just us two, playing, screaming, talking, you know, as kids did. So, this day, we decided to go into the garage and play. The moment we both stepped into the garage we hear voices. But we didn't bother checking before to see... because you could clearly see where the alley was. And who was in the alley. We just seen... We just looked at it, like, what is that?

So, we took a few steps, since my garage is small, and we decided to take a look outside into the alley. This time we heard voices coming in. We saw... it was people in the alley. These people were just talking in groups. There were about 50 to 75 people in this alley, all in black and there was a big black limo on the side and what... it seemed to be an alien. I know it was. I know it was. The alley behind my house, is narrow but long so it was like, of all the places, why would people be here? My first thought was maybe they're filming. Maybe a guy's dressed up in this alien costume to do, maybe a scare or something. Who knows? I never once thought... my first thought wasn't like, oh, it's an alien, you know. I thought it was just someone playing around. So the moment my sister and I looked, we saw this we thought it was so funny we went back into the middle of the garage and giggled. We looked at each other and laughed it off.

And so we were really nosy kids. We decided to check it out one more time. We were not gonna stop checking it out. We were nosy like that. So the third time we go out to check it. One more time, everyone and everything is gone! Gone! And it only takes like five seconds to go to the edge of the garage and to be able to see everyone in the alley that we did see. I told you my alley is narrow but long. 50 to 75 people and a limo. It would take more than five seconds for someone... and everyone... everyone there and the car, vanished! A big ass car, to leave this alley... like snap a finger. Everyone was gone. And then my sister and I, we looked at each other because it got so quiet every time we go back. I mean, everybody stopped talking. And we looked at each other. Did you just see what I just saw because I know you just did see because you were with me. And it was like super weird. How did that even happen? I mean how did that even happen? Mind blowing. It would take time to clear people from this alley, that many people from this alley with that big ass limo from this place and they would make noise because there was a lot of like pebbles and this stuff in this alley. We would hear the tires on top of the little rocks. We could hear footsteps because we could hear everything because it was like a quiet place. You could hear everything and everyone and it would not take five seconds.

I don't expect anyone to believe me. It's just mind blowing that like I got to see this. I know that it had to have been an accident that I did see what I saw. I was mind blown. I still am. I'm speechless about what I had seen.”