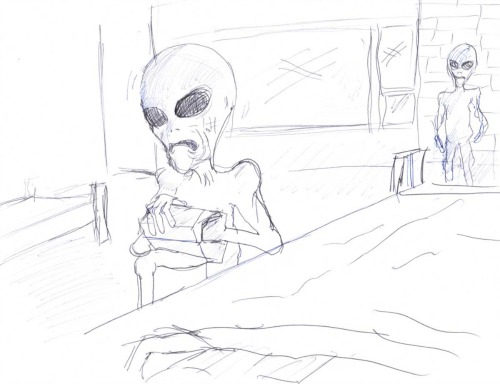 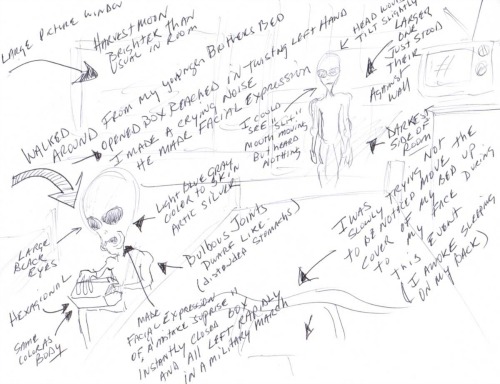 OMG, they're real...what do they want?

West Orange, NJ: It was late night in late October early November of 1975 I was a 10 year old child. At that time I was going through a late bed-wetting phase and remember I was determined to end that embarrassment. I awoke for the second or third night in time to relieve myself and remember being happy and proud that I caught it in time again.

As my eyes creaked open slightly I saw movement in the room and at least what I thought were African American kids in my room moving around. I remember thinking that the only thing they could steal of any value was my prized small black & white TV that was on my dresser next to my bed. As you can imagine at this time my heart was pounding through my chest and just wanted them to take the TV and leave. I creaked my eyes open ever so slightly as not to be noticed and was shocked to realize that they weren’t afro’s (which were common at that time) but were whole heads.

I can’t really express my thoughts of that instant realization when I saw who was really in the room at that time other than how in a nanosecond I went from (There’s no such things as aliens-to-Oh, my GOD they're real-to-What do they want?). At that time there was no such things as “Greys” or anything similar to what has been so defined into pop culture today.

Being late October early November there was a harvest moon and I had a fairly large picture window in my room which lead to some fair amount of ambient room lighting which I shared with my 5 year old brother who slept in a adjacent bed next to mine.

During this event I was creaking my eyes open enough as not to be noticed, laying on my back when I woke up and my bed covers were at my waist. ALL I wanted was to get my bed cover up to my head so I was ever so slowly and methodically creeping them up during this entire event. As not to be noticed. There was a larger one that stood against the wall directly across from the foot of my bed that just stared at me. There was another knelt down on the opposite side of my brothers bed and what I thought at the time was that he was doing something to his arm.

I my head at the time my mind was reeling, my parents room was directly behind me and if I screamed my father would come running in. I remember thinking that the one next to my brother I was taller than and equated him to being in “my grade” remember I was 10. So if he came over to me my big plan was to jump up and dive on him and scream for my dad. The one against the wall just standing there I remember as being a grade or two older than me and he would probably do something before my dad to get in.

I remember thinking I could end the whole debate that are we alone in the universe and the weight of that thought being succumbed to he’s killing my brother and not being able to muster the internal strength to do something. My next thought was that if he comes over to me he can’t put a needle in me so I started to tear up and that diffused my sight to what was happening in the room.

Then the one that was knelt next to my brother got up and came at me, pure horror as my eyes were teared and he rounded my brothers bed and in one motion knelt down on his right knee and in one motion opened his toolkit and kind of flipped and twisted his left wrist and reached in. At that very moment I couldn’t hold it anymore and thought needle! and I made a audible pre-cry whale. The face that the creature made still haunts me today. Honesty. It’s the same face people make when they make a surprise mistake a “eek I did something embarrassing” facial expression. His mouth was just a slit so when he made that expression his face rippled and wrinkled like a old man.

Immediately whatever he was taking out of his box which was a really weird shape then but not now, it was (Hexagonal with a diagonal opening and handle) put it back in got up and they marched out. Again another part of this is memory that has crept me out is how they moved like the military and moved or better said marched out of my room. I was shocked and with unreal timing as I looked down the hallway when they past my parents room two more came out and filed in line which such precision and marched down the hall and all turned down the stairs out of my sight.

Again I must stress the timing was if they were one. Needless to say I didn’t sleep the rest of the night. My younger brother was fine in the morning, and no one in my family knew anything of the nights event. I lived near a large metropolitan area at the time and our house was the only house surrounded by 260 acres of woods.

I only told a handful of people since then and find it very difficult and seriously doubt many of these accounts I read of abductions myself. Ironic isn’t it. They were very, very real, and I wish I dream't it but I didn’t.

My impression then and my life of the events of that night is that these beings are cold and indifferent to us, basically they are not our enemies but most certainly aren’t our friends. There might be a very good reason our government has kept this secret for so long.

Side note:
Physical appearance is not as "Sinister" as depicted. More of blue/grey arctic silver color than grey. Bulbous joints with slightly distended stomachs, very similar to dwarfism. Seen mouth slits move slightly along with large head movement just as like they were speaking but heard nothing. - MUFON CMS

Another voice has been added to the witnesses that say they were present during the Rendlesham Forest UFO Incident of 1980, corroborating reports of the United Kingdom’s most famous UFO sighting. A former United States Air Force (USAF) security police officer now says that he was there when the military went into the forest to investigate a mysterious light, which he describes as being “not of this world.” He was also told by his superiors not to speak of the incident.

Open Minds reported this week that former USAF security police officer Steve Longero, who was stationed at Bentwaters Air Force Base (adjacent to Rendlesham Forest in England) in 1980, was interviewed twice via phone by Mutual UFO Network (MUFON) researcher Philip Mantle and disclosed for the first time that he was witness to the extraordinary events that allegedly occurred in and around the forest that later became known as the Rendlesham Forest Incident, arguably the UK’s most infamous UFO episode. Longero, now retired from the Santa Clara County Sheriff’s Office since 2012, recounted that his stint at Bentwaters Air Force Base was his first duty posting and after the UFO incident, it was the talk of the base. Read more at New Rendlesham UFO witness comes forward

Cherokee, North Carolina - November 1982: The witness was sleeping on the couch at his girlfriend's house. The room was pitch black when he saw a dark figure in the hallway that seemed to materialize. The figure was human-shaped and blacker then the darkness in the hall. The head of the figure reached the ceiling and slightly bent forward as if the ceiling were too low for the figure to stand erect. He lay on the couch not comprehending what his eyes were seeing. He tried to speak but no words would come out of his mouth. He tried to yell but only a whisper would come out. The room seemed to get colder as the figure moved slowly forward in a gliding motion. He tried to move but his body refused to obey. The only movement he managed to make was an involuntary tremble.

As the silhouette moved into the living room, it moved around the walls with it's head turned toward the witness. Something made him turn his head and watch the giant dark figure gliding around the room. It moved behind the stove and through the stovepipe as if nothing were there. He watched as the dark figure moved closer and closer to the couch where he lay. The black silhouette was now next to the couch. As the witness lay there looking at the dark figure, a feeling of pure evil came over him. His mind went numb, and tears began forming in his eyes. Then as if miles away, he heard laughter. Evil laughter, laughter not of this world. As the laughter grew closer, it begin to sound as if many people were gathered in a room engaged in some sort of party, with many conversations going on at the same time. He then heard the laughter again and a high-pitched woman's voice say, "We scared him to death."

In his mind, the witness began to pray. He managed to yell out, "God help me!" With that said the dark apparition began to fade until it completely disappeared from his sight. The coldness in the room was replaced with the heat radiating from the stove. - Unknown

Victorian Christmas Cards That Are As Creepy As Those Times Themselves