The Zombie-Ghost on Roberts Road 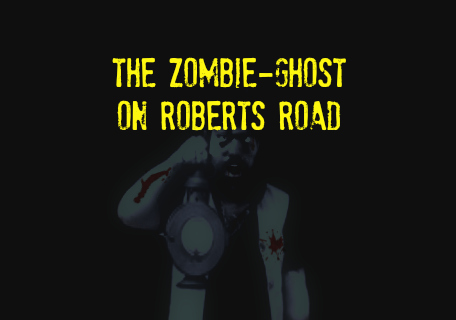 Tom from Chicago called in to tell of his weird zombie-ghost sighting on Roberts Road, known for being haunted by Resurrection Mary:

“This happened approximately 11 years ago (1992). It was around 3 in the morning, I was coming home from a party with a friend. We were driving down Roberts Road and I know you're thinking 'Resurrection Mary' but this has nothing to do with her. There was somebody standing by the curb with a lantern and he got in front of the car and we slowed down. He walked toward the car. We looked... he had... it was February, he had, like one of his arms was out, like a bandage was hanging. It was stained to look like blood or whatever... this was really gruesome looking. His mouth was agape. His eyes were like rolled in back of his head. His leg was missing and you could see like a translucent face through him. We just looked at each other and were just like: Whoa!

We drove on. He walked in back of the car and the other car, we looked in back, and the other car went right through him. Went right through him! (Art Bell asks him to get over it again) We both saw it and he was right by the side of us. We drove and he continued to walk across the street and there was another cemetery, it was Bethany – he was walking to the other cemetery. And there was another car in back that drove right through this apparition. I mean it blew me away for like a year. I'm telling you. Spooked. That was the most spooked out one I've ever been. I mean, I had a witness. We called Justice Police but they didn't want to get into it and then I called Richard Crowe (a famous Chicago-based paranormal investigator).”


Haunted: On Ghosts, Witches, Vampires, Zombies, and Other Monsters of the Natural and Supernatural Worlds

The Ghosts of Chicago: The Windy City's Most Famous Haunts