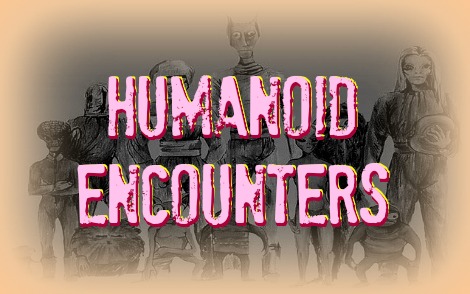 The witness who for the past two to three months had been followed by three strange men wearing black suits, was standing in front of his house one night when a car drove up and the door opened. The witness apparently lost his will and was compelled to enter the vehicle; inside the same three men he had been trying to hide from met him.

They drove around for a while until they reached a wooded area outside the city. They stopped the car near a large hovering object that was encircled by a luminous ring. The witness and the three men then walked underneath the object and were hit by a beam of light. He suddenly found himself inside the object, sitting on a chair. Suddenly handles appeared on the chair that secured his wrists and an iron bar pressed his forehead backwards while another gadget held his neck. The three men then appeared and suddenly seemed to shed their skin or bodies and transformed themselves into green scaly reptilian like creatures with heart shaped heads. The beings interrogated the witness and spoke of upcoming global events. At one point a door in the room was opened and he was able to see human corpses hanging by their feet from hooks on the walls. Everything went blank after that and his next conscious memory was of standing next to a theater near his home.

A 50-year old grandmother was sleeping with her grandchildren in a room and had left several lights on to comfort them. She awoke suddenly and noticed that the lights were turned off. Her eyes slowly accustomed to the dark and she felt a presence in the room. She then saw two short figures standing near her bed. She attempted to contact them, by using telepathy, pleading to go with them if they left the children alone. The beings did not answer her plea. She was then startled as one of the beings moved aggressively and grabbed her. She jumped up and punched the being on the face, his skin felt like hard plastic, she struggled further grabbing the figure by the throat, the neck appeared horribly wrinkled. The being was about 5-feet tall and thin. She then bit the being; she said it felt like biting a cold piece of ham. After a few minutes of struggling the being dropped to the floor. At this time a third figure appeared in the room, then the two standing aliens moved towards her. One brushed against her face and grabbed her wrist; this one seemed stronger than the first. She then suddenly passed out. Upon regaining consciousness the figures were gone. The children had been apparently unharmed. She suffered from a severe headache afterwards and found three puncture wounds on her neck.

The elderly female witness, who lived in an industrial area of the city next to the airport and facing the waterfront had stayed up late one night watching a movie on the television when she was distracted by a flashing violet colored light coming in through her window from the direction of the water. The light reminded her of the flashing light of a lighthouse.

Stepping out to her 5th floor balcony she noticed a dark domed object that had apparently landed on the water directly across from her apartment. It had a bright light similar to a welder's torch that moved about in a zigzag manner. The object was large and totally silent. Soon she noticed a figure standing on the object on one side. It resembled a "lead soldier" and wore a square helmet with two rectangular openings at eye level. It wore a tight-fitting metallic suit. She could not see a nose or mouth. The figure was completely still, until it suddenly turned his head and stared directly at the witness.

At this point a bright beam of light struck the witness square in the face, temporarily blinding her and causing her to fall back into her room. She continued to watch the object and the soldier like figure from a window. At times the beam of light would strike the window area as if searching for her. The figure eventually entered the object on its left side and the craft rose and left silently at high speed.

The main witness and his wife had bought a ranch in an isolated area in 1975 and for more than a year they had been experiencing strange sounds, UFO manifestations and Bigfoot sightings on the property. There were some cattle mutilations as well.

One night the man and the eldest son went up to the top of a hill to examine a burned spot from the previous year. As they sat in the car, a beam of yellow light shone on them from nearby woods. Walking towards the trees, they discovered a buzzing black box, clearly seen in the light of the full moon. As they approached, it changed tone, now sounding like a swarm of angry bees. The two retreated to the safety of the car. The witness told the young man to stay by the car and went back to the spot where the black box had been; it was now gone. He saw a light in the trees and, walking toward the light, came upon two individuals standing near the light source. As he approached, they spoke to him, saying "How nice of you to come." Some distance away, down a slope, was a disk, illuminated, about 50 or 60 feet away. The two beings apologized for the trouble they had caused, promising a more equitable arrangement. They told him several things he was not to repeat, but which had no special meaning for him at the time. They regretted damage done to several of the cars, but they did not acknowledge responsibility for any of the local cattle mutilations. They told him he was wise to have backed off from the black box, which was nearby. They pointed in a particular direction and the tone on the box changed; as it did, a Bigfoot type creature got up off the ground and walked toward the box. The tone changed and the creature dropped. The meeting lasted five minutes.

In appearance the beings were similar, human looking about 5'6" in height, and wearing a tight fitting outfit like a flight uniform. The suits changed colors from brown to silver. Their complexions were fair and they had blond hair, not long. The most notable features were the eyes, which were very large but otherwise normal looking. They were different in subtle ways but could pass as humans in ordinary situations. Before the witness walked away from the scene he was told by the beings that he would see them again. 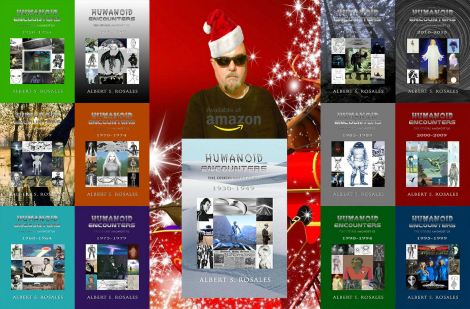