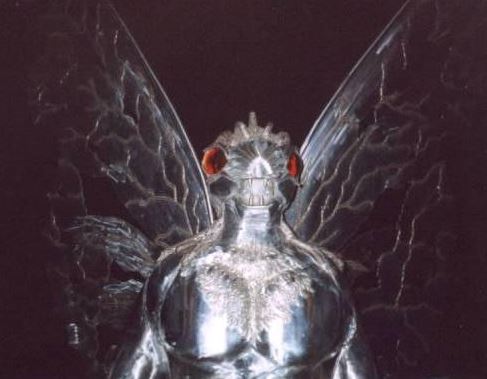 The following is an eyewitness statement of a shape-shifting being in the Point Pleasant, WV area...just one month before the Silver Bridge collapse:

So one chilly day in November of 1967, my parents decided to go to a private event in Point Pleasant, WV. We were southbound on the highway by the Ohio River on the W.Va. side. It was a long ride and my butt was starting to go numb, so I shifted around and then caught sight of something from the corner of my eye. On the side of the road, in a thin stretch of woods between the highway and the river was this bum...or I thought he was a bum. He was wearing a brown flannel shirt and grubby, baggy brown pants and a brown hunting hat with ear flaps down. He was running alongside our car! I checked the speedometer, we were moving at 35 mph! I kept looking at him and he kept running alongside the car, then he turned and looked at me. It looked like he was wearing old-style welding goggles or old-style motorcycle goggles. They were brown-framed circles with bright red lenses.

He kept up with us for several hundred yards until a wide bend in the road moved us apart and I lost sight of him. About two seconds later my brothers started yelling about " The man-he's flying! Look! That guy is flying!" It wasn't the same guy. This one was in a silver suit with wings. He held his arms up by his chest, I don't know how he was controlling his flight. He shot straight up out of the woods, then leveled out and headed towards the east. He had red eyes, but not like the running guy's. The flying guy's eyes were glowing very brightly. He flew behind a hill and that's all we saw of him. - Witness' first-hand account

Between Battle Creek & Bellevue, Michigan - February 2006: A woman driving alone on a road at night between both towns had to slow down for a stop sign. Suddenly a creature of very large size jumped up over a snow bank and ran “10 yards a second”. It was coming towards the car. She further described the creature as “enormous and its body as white as the snow around it”. It had tiny little legs, like animal goat legs but very small. She had the impression that parts of it were like a man and other parts of it were an animal. According to her it either grabbed, or reached for the door handle but he car was locked. She said its fingers were incredibly long, “long, long fingers and nails”. It was so incredibly fast that she did not see a face or anything else. She mentioned that another car of people had also seen it too; they had stopped and looking at it at one point. - Witness report

Police Set Up A Camera In Kansas To Find A Mountain Lion And WTF Is Happening - everyone wants to get in on the action!

Visual Tracers: Optical Anomalies and Ghostly Phenomena Through the Ages

The Man Who Feared An Unearthly Disease


Anonymous: A Former CIA Agent comes out of the Shadows to Brief the White House about UFOs