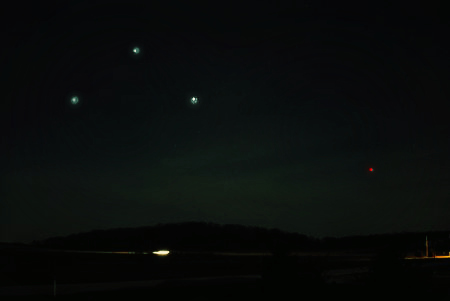 Dallastown, PA - 1/20/1995: I was 15 years old living in Dallastown, Pennsylvania. It was a Saturday evening, myself and several friends were walking along the back streets north of the main road with a great view of the hills on the other side of the valley towards York. I don't recall what got our attention but we watched several bright lights hovering and slowly moving around over the hills on the horizon. At first we thought they were just distant airplanes with there landing lights on. But, after watching them for over 30 minutes, we realized they were flying the same pattern over and over again. The larger brighter white light would fly in slowly from the west to the east and hover in a certain spot. A dimmer smaller light would come in from the east to west more quickly and at a higher altitude, then fly slowly as it got closer to the first light. At some point when they got too close, the larger brighter light would fly off very quickly back to the west and the dimmer smaller light would shoot straight up and disappear. The cycle lasted about 2 minutes each time with about 5 minutes in between.

We watched this continue over and over again. It went on so long that we had time to get more neighborhood kids out there and even run into my house and get a camera from my mother, who didn't care as much about it as she did getting to sleep for work the next day.

At this point there are about 6-7 of us kids watching these lights replay the same cycle repeatedly when 3 low flying helicopters flew over our town heading towards the lights. They were close enough when they flew by that we could tell they were the big kind with two rotors on top but since it was dark I couldn't tell you what color they were. Each had a strobe on it which we could see as they went over the hills and formed a triangle around the area where the lights were. The helicopter strobes hovered there about 10 minutes and the lights stopped coming so we all got disappointed thinking they scared them off. But, just as suddenly as before, the two lights started there cycle again. We took a bunch of pictures, most of hat rims, fingers, and friends joking around, the only one that turned out was just a blob of light.

About an hour and a half after all of this started it ended with a final cycle of the pattern that was different from the rest. This time, with the strobes from the three helicopters framing the scene, the brighter bigger light came in slowly from the west heading east and came to rest at a hover in its usual spot. The smaller dimmer light came in more quickly from the east heading west and at a higher altitude. As it got closer to the brighter light, it slowed down. Then, we saw a small pulsing red light come out of the dimmer light. The small pulsing red light connected with the larger brighter one. At this point the dimmer light shot straight up as usual. But, when the pulsing red light connected with the bright light, sparks like fireworks started shooting out of it and it darted off down and west. It was very bright and startling, all of us jumped back, some had the instinct to run away a few steps, one girl even fell backwards. We watched for another hour but the lights never came back and the helicopter strobes eventually left.

The following Monday, there were stories in the local paper about people in the area spotting the bright light with fireworks coming out of the back shooting threw the sky. They were dismissed as meteor sightings. The thing that never sat well with me was, the sightings in the paper matched the description of how the bright light looked at the end of the light show but the witnesses saw it on Sunday around 5:15pm. What we saw was on Saturday around 7:30PM. I cant explain what we saw that night, and although I looked many times, I never saw anything like it again. I still have several newspaper clippings from that weekend today - MUFON CMS

Scientists still don’t know what’s killing large numbers of fish and other sea creatures washing up in a remote area of western Nova Scotia but they do have a few theories.

Scores of herring, starfish, lobsters -- even a whale -- have washed up over the past month between St. Marys Bay to Tusket. Scientists say it’s too soon to know if the whale’s death is related to the others.

So far, all tests for bacterial and other diseases have all come back negative, according to Smedbol.

There are some viral tests that have not yet to be completed, so disease remains a possibility.

Storms can be deadly for marine life, according to Smedbol.

Storms cause “turbulence” and they can also lead to fresh-water runoff that “can quickly drop the salinity close to shore.”

So far nothing anomalous has been noticed in the weather patterns but it remains a possibility, according to Smedbol. The salinity of the water is being tested.

Smedbol said it’s possible some sort of human-made pollutant or agricultural runoff caused the problem but it seems unlikely considering there are few farms or people in the area.

Either way, St. Marys Bay “basically empties and refills once a day,” according to Smedbol, “so if it was a one-off event it might have already washed out of the bay.”

Many armchair scientists believe this is the cause of the die-off but Smedbol says the evidence to date doesn’t support that theory.

Video evidence shows some of the animals washing up on the beach are still alive when they get there, and the turbine is about 160 kilometres away. - 4 theories on what's killing fish and other sea creatures off Nova Scotia

Deep in the caves of Goyet in Belgium researchers have found the grisly evidence that the Neanderthals did not just feast on horses or reindeer, but also on each other.

Human bones from a newborn, a child and four adults or teenagers who lived around 40,000 years ago show clear signs of cutting and of fractures to extract the marrow within, they say.

"It is irrefutable, cannibalism was practiced here," says Belgian archaeologist Christian Casseyas as he looks inside a cave halfway up a valley in this site in the Ardennes forest.

The bones in Goyet date from when Neanderthals were nearing the end of their time on earth before being replaced by Homo sapiens, with whom they also interbred.

Once regarded as primitive cavemen driven to extinction by smarter modern humans, studies have found that Neanderthals were actually sophisticated beings who took care of the bodies of the deceased and held burial rituals.

But there is a growing body of proof that they also ate their dead. Read more at The caves that prove Neanderthals were cannibals

Beware of the “Indian Devil”


Thirty True Tales of the Weird, Unusual and Macabre: From the Notebooks of the Paranormal Journalist

It Was a Dark and Creepy Night: Real-Life Encounters with the Strange, Mysterious, and Downright Terrifying