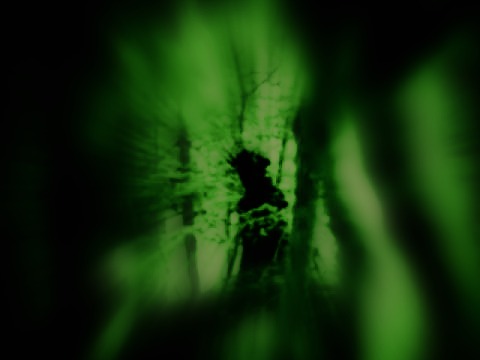 The witness and his cousin were out hunting near Johnson City, TN and were sitting on the side of the wall of a rather large hollow which consisted of very thick underbrush and lots of evergreen. A larger valley then lead first to a clearing and then on to a supposed old Indian graveyard. All of the sudden they heard the brush in the hollow below rattling and they could tell that whatever was making the sounds was rather large.

The main witness was armed with a Ruger 10-22 rifle with approximately 150 rounds of ammo ready to go. Under his night vision scope he could see what appeared to be a man, but upon further inspection he realized that the "man" was a creature about 7-8 ft tall approximately 450 lbs. It was covered with thick black fur and was slimmer that the popular Bigfoot image, almost skinny with a neck. Also protruding on either side of its head were long tapered "horns" also black in color. On the top of the head also protruded a horn pointing straight up. All horns were approximately 5-6 inch in length and were the same dark color as the creature.

The terrified witness emptied a 25 round clip into the creature and then retreated into a nearby cabin about 65 ft away. The next morning they could not find anything except for lots of spent shell casings and bullet holes on a walnut tree. He thought he had struck the creature several times. Nearby animals traps had been sprung and all the bait extracted. On a nearby ridge the witnesses located a series of tunnels made up of brush and various sizes of tree limbs, vines and leaves. They thought it could have been "the lair of the beast." Afraid they returned home. - Witness

Highly toxic Cesium-134 – the "fingerprint" of Fukushima – was found in Tillamook Bay and Gold Beach, Oregon.

The terrifying discovery was reported by researchers at the Woods Hole Oceanographic Institution.

The 2011 Fukushima nuclear meltdown was sparked by a massive tsunami off the coast of Japan caused by a 9.0-magnitude earthquake.

Since then, the entire area has been a dangerous no-go zone. Read more at Fukushima nuclear plant RADIOACTIVE FISH found on west coast of US

Bill from West Hartford, Connecticut called in to tell of his weird experience:

“Sometime in the 1970s. Sometime roughly between 1970 and 1980. I was living at my parent's house at that time. I was in my 20s. Between 20 and 30 at the time and my room upstairs. Upstairs in my parents house still in the same house in West Hartford, Connecticut. One time... this has to do with a pool of water about a diameter of a yard – a three foot yard circle of water that inexplicably was on the floor in my bedroom. Now it had been raining outside, yes, it had been raining but the windows were closed I remember. No opening in the roof and this was right in the center of the floor in my room. Not near the window, so it's not like the rain somehow seeped through an open window because I remember the window was down. How did a large circle of water about 3 foot, a big pool of water... my mother said to me, Did you urinate on the floor? Of course not, Ma! I did not... and believe me, I did not urinate on the floor. It was inexplicable. She went and got the mop and dried it up and I was just wondering, how the heck did a big pool of water get on the floor?”

Declassified Document Suggests Many of Us May Have Superhuman Powers


Terror In The Night I - Alien Abduction Exposed!