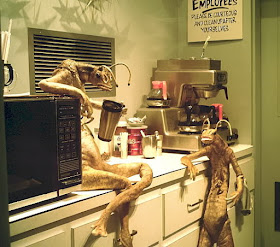 The following account is from Humanoid Encounters 1900-1929: The Others Amongst Us:

Small Brown Men From Another Planet

J. L. Buick and another prospector were startled by a small brown man saying; “Peace be with you, my friends.” Sitting on a patch of sand was a silvery-round object nearly 100ft in diameter, with central dome and a small conning tower; no wheels underneath. Around it were other small men in brown picking flowers, pebbles, etc, and some mining a rock out-crop. The occupant told the witnesses he was from another planet, which had secretly been keeping tabs on Earth for over a hundred years; they had learned English via spies working in a US circus. The craft rose silently and then took off. Next day it came back, and they were given a tour inside; five concentric saucers with diminishing air pressures, the outermost being evacuated. As to lift, “gravity is only a different type of magnetism,” so it can be controlled by an electromagnetic drive; they can do 9000 mph, and have artificial gravity inside the saucer. Rockets, they were told, had failed for space travel. 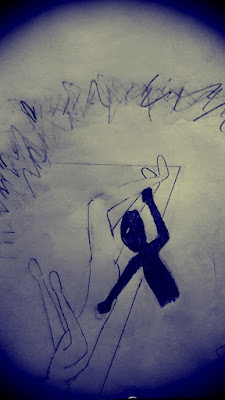 Laguna Hills, CA: On December 25, 2016, I went to bed between 9pm - 10pm PST. At approximately 3am PST in the morning I was awoken by a commotion in my bedroom involving my wife and daughter. I didn't investigate the matter and tried to return to sleep; however, my young daughter and wife failed to return to the bedroom.

Anyway, I went back to my bedroom and changed the sheets because I could still see a little of the dog waste. I then told my wife she could return to bed with me but she was too tired to get back up so I let her be. Well, I am light sleeper so it was hard for me to fall back asleep. I want to mention I wear a sleeping mask to bed at night and take magnesium before going to bed because both help me fall asleep faster and have more sound sleep. I have had sleeping problems my whole life. I turned on the TV and watched it for about 1 hour before becoming sleepy again.

When I fell asleep I had a vivid dream that bothered me and I suddenly awoke. It was still dark outside and I was laying on my left side. I was thinking about the dream when all of sudden I felt static electricity all around me. At that moment I knew "they" were coming. I started to roll over onto my back at the static electricity grew stronger but I also began to feel paralysis in my body. It felt like I was moving in a giant jar of molasses.

I was just able to begin to turn on my right side before I was unable to move any further. My right arm and hand were hanging off the bed. I then realized I could see through my night sleeping mask. There was no color; everything looked blackish gray and very fuzzy. It was like I was seeing the static electricity.

I then saw a small gray alien no more than 5 feet tall materialize through my bedroom wall on my right side. It was then standing right through my night stand and in front of light fixture. I remember thinking how diminutive in size he was. He then grabbed my right hand that was hanging off the bed and squeezed it. I then heard a voice inside my head saying, "Yes...were are real." While he was squeezing my hand I felt a sudden sense of euphoria, excitement, and elation. I then communicated back to him using my thoughts and I said, "Hi, my name is ...." As soon as that the event was over. The being left through the bedroom wall and I remained paralyzed for a little while longer. The static electricity in the room started to dissipate too.

I was in such a state of shock, I couldn't believe it. I sat up in bed not knowing what to do. I laid back down because then a deep comfort overtook me. I felt such a great sense of satisfaction because I now knew in my heart and mind that I was going crazy and that others I know weren't going crazy too. I had been given piece of mind.

I went back to sleep having another vivid dream which I still remember. I then awoke around 8:30am PST. My wife was still asleep but she awoke a short time later and I told her everything. I was expecting her to tell me it was a dream but she said the exact opposite. She believes our dog sensed something was going to happen and that's why it went potty in our bed. Our dog that we've had for 7 years has never done that. She also mentioned our dog was acting very strange the night before and we thought she was getting sick or ate something bad. This ended up causing my wife and daughter to sleep in another room which left me sleeping alone the bedroom.

I've seen and experienced things my whole life. Starting when I was little boy all the way up until now. I made a report to MUFON on June 5, 2016, regarding an object I filmed during the evening over my house on June 4, 2016 (a small plane at lower altitude is also in the video starting at the 24 second mark); however, I did not report that events that unfolded later that night. I was too embarrassed and afraid of what the MUFON folks would think so I left the dream details out.

That night I had a vivid dream of awakening, laying on my left side and completely naked. Everything was fuzzy and my vision was somewhat blurry. My first thought was "Oh my God, I can't believe this is happening in my house" but then I noticed I wasn't laying on my bed. I then noticed a small alien whose skin appeared brownish gray (like a grocery bag) on my right side. I was laying on the very edge of a table. The alien had his left hand on my right shoulder and his right hand towards my feet. His head was turned towards my feet and he was slightly bending over me at the same time. At this time I noticed a feeling of deep discomfort on my lower back and buttocks area. But I couldn't move or say anything. Right at this moment, the alien somehow knew I was aware/awake and turned his head towards me. We were looking eye to eye.

Next thing I know, I'm awake in my bed and it's early morning and I can see blue sky out the window. I told a close friend who advised I should look for any strange marks on my body. I found 2 parallel marks on my left so I took pictures of both my knees. The marks have faded since then.

I don't believe I can no longer doubt everything that has happened to me and that continues to happen to me. I am just happy knowing I don't have to torment myself everyday wondering if I am insane or not. - MUFON CMS

JOHOR BARU - The Consumer Claims Tribunal was set up to allow consumers to file claims in a speedy and inexpensive manner.

But it has seen some really strange cases.

And one of the weirdest was when a man complained about a bomoh who apparently did not live up to the promise of chasing away spirits haunting his ailing father.

The 40-year-old complainant sought the tribunal's help as he wanted a refund from the bomoh.

The bomoh had claimed that the 70-something father was tormented by nine different spirits.

"The 'bomoh' charged RM90 (S$30) for each exorcism to free the man's father of the spirits.

"So, the family forked out RM810 to the 'bomoh' to get rid of the nine spirits," Johor tribunal head Samuel Mut John Brody said in an interview.

As it turned out, Samuel said the bomoh failed to cure the man's father even after nine treatments.

"The man said his father's condition worsened and he died a few months later."

The family went to the tribunal seeking a refund for the non-delivery of service.

The tribunal had to strike out the case as it was out of its jurisdiction.

Samuel explained that exorcism was considered an alternative service and that the bomoh did not register his business with the Companies Commission of Malaysia (SSM).

Samuel said the tribunal recorded an increase in the number of claimants who filed reports for all sorts of odd cases.

For example, he said there had been cases of people looking for their spouses.

One claimant sought for the smallest amount recorded in the tribunal's history - 10 sen - for a car service-related case last year.

In May this year, a woman, in her 40s, wanted a refund from a private investigator whom she had hired for RM1,500 to search for her missing husband.

She claimed the investigator not only did not locate her husband, he also disappeared with the money.

Samuel said the case could not be heard by the tribunal as the private investigator had failed to respond to a notice to appear for the hearing.

He, too, was not registered with SSM.

The tribunal had to filter the cases it received to avoid cases that were out of its jurisdiction, he said.

He urged consumers to check the seller's company registration number, identification documents, full name and other details before purchasing goods or services to prevent from getting duped.

Consumers can claim for their rights whenever they feel that they have received inadequate services from the seller or service providers, he added. - Man seeks refund from bomoh for failed exorcism

The 99 best things that happened in 2016, from Ebola’s eradication in West Africa to saving the manatees

Rare Footage of the Last Surviving Witness to the Lincoln Assassination

Tesla Autopilot Appears To Predict Crash Moments Before It Happens

Enter The Elephant Rat - A Shukernature Picture Of The Day


A Menagerie of Mysterious Beasts: Encounters with Cryptid Creatures