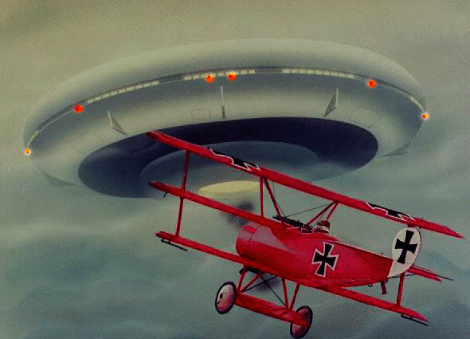 Hey folks...I'm going to be busy with two clients, so there will be this single post today. The following account is from Humanoid Encounters 1900-1929: The Others Amongst Us:

German Air Force Ace Peter Waitzrik and the famed Baron Manfred von Richtofen were flying a mission over western Belgium when an object with undulating orange lights suddenly appeared in a clear, blue sky directly ahead of their Fokker tri-planes. Both were terrified and assumed it was some type of US aircraft (The US had just entered the war). The Baron immediately opened fire and the thing went down like a rock, shearing off tree limbs as it crashed in the woods. Then two little bald-headed occupants climbed out of it and ran away. Waitzrik described the craft as silvery in color about 40 meters in diameter and resembling a saucer placed upside down. The two bruised but otherwise unhurt occupants ran into the woods and were never seen again. At the age of 105-year old Waitzrik recently broke his silence and confessed the details of this incident.

Flying Machine in the Cornfield 1890s

This is a strange story but interesting nonetheless so I thought I should share it to see if anybody could do anything with it. I have a video tape of my great grandma from when I was kid. She was sitting around with her sisters talking about old stories from when they were kids. One sister started talking about a story her father, my great great grandpa made her promise to never talk about, but since she was over 90 years old she didn't think it mattered anymore. She was very flustered still just talking about it. The best we can tell, this event took place in the Logansport, Indiana area in approximately the 1890s or so.

My great Aunt was taking food to her father and grandfather working the fields all day as she did every day. She would take a horse and cart out to where they were working, have lunch, then come back home. On this particular day, she could not find her father, or grandfather. She then heard them yelling at her to get inside the woods nearby and hide. She complied and that's where they began telling her that they have been watching some sort of flying machine that didn't make any sort of noise flying around the field. They supposedly watched little people get out of the craft and take pieces of corn and soil, then they flew away. The uncle and father had been hiding in the woods for some time afraid to leave.

All the people in the video have now passed on, but my grandma who is now in her mid 80s. The daughter in the story's niece, gave me this tape because she was curious if I could find any other reports from that time frame of anybody reporting the same sort of thing. I have the tape of the story, and that's about it. Its just a story, but interesting. - Anonymous

South Florida’s most aggressive invasive species has found a new way to grab headlines: slither atop a research platform in Biscayne Bay.

Last month, a kayaker spied a 9-foot Burmese python wrapped around part of a platform more than a half mile offshore in Biscayne National Park usually inhabited by sunning cormorants. The sighting was a first for the park and another worrisome sign that the state’s out-of-control pythons are getting more adept at inhabiting the state’s salty fringes. In September, state wildlife biologists confirmed for the first time that the snakes are now breeding in the Keys.

“It’s another raising of the notch in the war against pythons,” said University of Florida wildlife biologist Frank Mazzotti. “When you actually see something like this, how often does it occur that you don’t see it?”

Swimming snakes are not unheard of. A 2015 study by the U.S. Geological Society tracking pythons for five years found they lived in both freshwater marshes and mangroves around Cape Sable. Scientists suspect at least some of the adult snakes that started breeding in Key Largo swam there. Finding a snake on a platform just confirms the snakes are equally comfortable in open water, Mazzotti said.

“To find one swimming is not surprising and it probably, in the course of swimming, spied that platform and said, ‘Ah, this is a good place to get out in the sun,’” he said.

It also means the snakes could make their way to islands inhabited by birds or other small mammals and occasional turtle nests. Six of the park’s islands, including Mangrove Key and the Arsenickers about five miles to the south, annually attract nesting birds, mostly cormorants but also herons, egrets, ibises and roseate spoonbills. And any island big enough to support mammals could be a target for pythons. The 2015 USGS study found the snakes tended to congregate around tree islands in the Everglades, where birds nest. Read more at Think sharks are scary? There’s a new critter swimming in Biscayne Bay

After decades of fruitless scanning the skies for alien messages, scientists say it's time to try a basic rule of etiquette: Say "hello" first.

A new San Francisco-based organization called METI, or Messaging Extra Terrestrial Intelligence, plans to send signals to distant planets, rather than waiting for them to call Earth.

By the end of 2018, the project aims to send some conversation-starters via radio or laser signals to a rocky planet circling Proxima Centauri, the nearest star other than the sun, and then to more distant destinations, hundreds or thousands of light years away.

It would be the first effort to send powerful, repeated and intentional messages into space, targeting the same stars over months or years. Read more at Scientists plan to send greetings to other worlds

WEIRD 2016: How 'celebs back from dead', aliens and mummified sailor rocked internet


Flying Serpents and Dragons: The Story of Mankind's Reptilian Past

The Dragons of Eden: Speculations on the Evolution of Human Intelligence