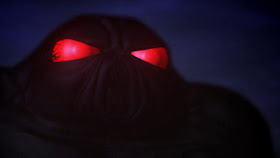 This occurred near NYC, very early on the morning of 12/30/2010. My dad was driving and my mom and I were asleep because it was so late. My dad pulled over and woke us up. He was royally flipping out. We didn't know what was wrong. He pointed to the overpass and all you could see were these intense glowing bright red eyes. At this point, we didn't know what it was so we just start driving again. When we reach the overpass the thing was still on it so my dad decided to stop. Then the thing swooped down and landed on the hood of our car. This thing landed with such a force it dented the hood! It then proceeded to stand up on the hood and it was 6-8 feet tall, black, and had wings!

We were all terrified at this point. My dad takes out the phone and calls the New York highway patrol and they laugh at him and hang up saying they didn't like prank calls. The thing was just sitting there. I took out my camera and photographed it (with the flash on). The thing then jumped off the car and took off, like it was afraid of the camera flash! When we got to my aunt's we told her and she said their were countless reports of this thing. Then I showed her the picture on my camera and she got REALLY freaked out. I have been doing research over the past couple of weeks and trying to find something that resembles it. At this point, I believe it was a Mothman. 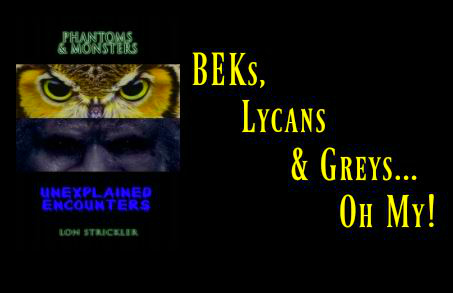 "A collection of unexplained encounters submitted by regular people who felt compelled to contact me about their encounter. I truly understand their dilemma...they want answers. But can they comprehend the truth? I have also included transcriptions and vintage news reports that detail unknown beasts and bizarre events. Black-eyed people, humanoids, entities, Bigfoot and hairy hominids, flying monsters and winged anomalies, upright canines, Dogman, Pennsylvania's lycans and more cryptids."

The Spirit of Jim Morrison

Lon, first off, thanks for such an informative, interesting, FUN site - your newsletter is always the FIRST email I read every morning! So keep up the good work, and please know how VERY MUCH APPRECIATED your site is, OK? (P.S. - I hope your HEALTH is OK!!! Keep us informed, OK? We CARE!) Anyway, I'm about to tell you about the ONLY true "paranormal experience" I've ever had in my life. Your site is the ONLY place I've ever felt comfortable relating this, and with God as my witness, it's COMPLETELY TRUE... It happened in the late 70's or early 80's (I can't remember, and am too lazy to look it up ) - shortly after Jerry Hopkins' book about the Doors ("No One Here Gets Out Alive") came out, at any rate. I'd ALWAYS been a fan of the Doors (esp. Jim Morrison, for obvious reasons ), so I bought the book ASAP and got immersed in it IMMEDIATELY. (GREAT book, BTW . . .) I was TOTALLY engrossed in it when this experience happened . . . I was happily married at the time, living in a 2-story, split-level house in Redondo Beach. And I was sleeping peacefully in bed with my hubby one night, when I was gently woken up by someone shaking my left shoulder. (I was laying on my right side, facing my husband at the time). So I roused myself up out of sleep and kinda looked around the dark room, trying to get my bearings and figure out what the heck was going on. My first thought was that my hubby had woken me up for some reason, which was unusual in ITSELF. Well, he was SOUND ASLEEP beside me, with his BACK to me. I kinda shook him anyway, to see what he wanted (cuz WHO ELSE coulda woken me up??), but I couldn't wake him - he was truly asleep, NO faking involved . . . And to this DAY I'm absolutely CERTAIN that I was visited (shaken by the shoulder - I can still FEEL it) by the spirit of Jim Morrison. I felt it very strongly that NIGHT (as I lay there in the dark, contemplating everything), and I've believed it ever since. He'd been HEAVILY on my mind for DAYS AND DAYS, and I feel that my thoughts must have DRAWN HIM to me that night in some way - the same way that thinking about a friend will compel them to CALL you (and vice versa), you know what I mean? Anyway, there it is - that's all I got! 😊 I'd be VERY interested to know if you or any of your readers have ever experienced anything similar. Thanks for listening, Lon -take good care of yourself! Luv, K

Gulf Breeze, Florida - January 12, 1988 - 5:30pm: Ed Walters was in his pickup truck on US 98 when an object appeared ahead of him shining a white beam of light through the windshield partially paralyzing his forearms and hands. He stopped the truck to the side of the road. He now felt numb and his arms were stinging. The object approached quickly and now hovered 3-feet above the roadway. The witness was able to grab his shotgun and exited the truck attempting to crawl under it. At this point the object brightened and it came closer. The witness was again hit on the back of his legs by a white beam of light. The object now began rotating and a blue beam of light appeared under it. The beam apparently deposited five small beings on the roadway, all wore some type of shield like coverings had large black oval shaped eyes and carried glowing rods. The beings now walked towards the witness, who then managed to crawl back into the truck and was somehow able to start it, he then drove quickly away from the area at high speed. - Witness

Uniontown, Pennsylvania - August 3, 2000 - 10:00pm: Five witnesses observed what they described as an alien "glide" across a field. The witnesses described the being as about 5 feet tall with long slender extremities. It carried a brown "staff" about 5 feet long. It was observed for about a minute from a distance of about 250 feet. No apparent disturbances to the area around the being were reported. The creature appeared to glide about 6 inches above the ground, according to the witnesses. Weather conditions were cool and clear with no wind. No sounds were reported and witnesses commented on it seeming abnormally quiet at the time. Crickets and other normal background noises were absent. The witnesses lost sight of the being when they drove a short distance up the road to an area which they thought would offer a better view, only about 75 to 100 ft from where the being was seen. A small knoll obstructed their view as they drove. When they got to the closer location, the being was gone. The witnesses returned home after the encounter. They reported no serious effects from their sighting, although three of them did claim to be very tired the next day.- Stan Gordon, PASU, J Brown

NOTE: another strange tale from the Laurel Highlands of Southwest, Pennsylvania. This area is one of a few that facilitates sightings of Bigfoot/UFO/cryptid cats/alien beings and everything in-between...Lon

The Nightmare of Walking Corpse Syndrome

The Most Over The Top UFO Case Of All?

16 Gelatin Molds That Will Make You Nauseous - Do any of you remember these? I wish I could forget most of them...ugh!


Everything Is Under Control: Conspiracies, Cults, and Cover-ups

Authors of the Impossible: The Paranormal and the Sacred

Disneyland of the Gods

Freaks of the Storm: From Flying Cows to Stealing Thunder: The World's Strangest True Weather Stories