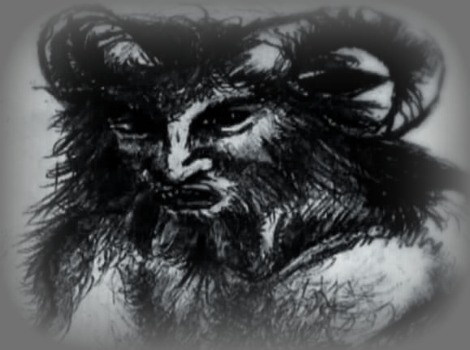 Dec. 2002 - The witness was on his way home, near Norway, Iowa, late one night after work. He almost always walked the train tracks because they were a straight shot towards the house. These train tracks ran past a cemetery which was alleged to be haunted...an old settler cemetery. It’s already dark and has been so for a few hours. There was no moon that night.

As he walks near the cemetery, he starts hearing muffled footsteps behind him but doesn’t think much of it. Plenty of other guys walk home this way as well. So he keeps going and the footsteps get louder and louder. About midway past the cemetery he’s gets nervous and the steps are getting closer so he turns to look behind him. According to the witness he saw a “goatman” or “the devil himself”.

He describes this 'thing' as a man who basically had goat hooves and horns along the lines of the mythical 'Pan'. And this thing was heading straight for him. Reportedly all the snow around this creature was instantly melting as it walked through. The witness runs screaming like a banshee. He hears the clopping of the beast's footsteps behind him speed up to catch him as he’s running. Finally he gets past the graveyard and sees the thing stop right at the edge of the cemetery. He continues running, stops to look back and the beast just vanishes.

One of his older co-workers confided with the witness that there was a tale about a 'goatman' many years ago. It was supposedly a Polish immigrant who disappeared one night but returned as the creature several years later. There had been UFO and strange being reports around the same time the man had vanished. - Witness account

Aliens in the Hallway

Brevard, NC - 1967-09-01: I was a young boy living in the Mts of Western NC (near Asheville) and I saw beings in my hall way for three nights in a row. I asked my father what they were and he said moon shadows or something.

One night I decided to sleep with my head at the bottom of the bed so I could peek out and see them better. No sooner had I looked for them when two short stubby beings came into my room. One walked right up to me, it was short so basically we were at eye level and I have perfect recall of them. I also woke up in their craft, I remember much of what happened, I remember tall lighter colored beings both in the craft and in my home. My little sister saw a craft once over the side yard, she described the same craft that I had seen and this was reported to the local sheriff.

My abductions and visitations happened between 1964 to approximately 1980 when I moved (joined the Navy). I am not sure that they ended though, as I do have many instances of apparent missing time. I don't have memories of them being right with me like I did before so I doubt they can risk our current technology to visit me now. I am hopeful that I can eventually reach out to them instead. That is one of the things I seem to feel they taught me. We need to develop more as a species to be totally integrated into our Universal family. - MUFON CMS

The St. Louis Zoo is nearing completion on a $198,000 replacement of observation windows at the orangutan exhibit after one of the apes broke four of them.

The 7-foot-tall windows were replaced in mid-November, but replacing the triple layer of glass with 3-inch thick acrylic required re-engineering the frames that hold them, plus a caulking process that requires 21 days to cure, zoo spokeswoman Susan Gallagher said.

The prime suspect in the vandalism is Rubih, a 12-year-old female nicknamed “Rockin’ Rubih” by zookeepers. They say Rubih tapped or banged rocks repeatedly against four of the six viewing windows over several months this year.

The habitat will reopen to the orangutans this month, although Gallagher said the outside temperature must be at least 50 degrees and sunny for the orangutans to go outside.

Zookeepers say Rubih was first caught banging rocks on the glass in the spring. The zoo’s professional ape care team successfully taught Rubih to instead bring rocks to them and be rewarded with a treat, but it didn’t end there.

When zookeepers weren’t around, Rubih kept banging on the windows with rocks. They suspected Rubih was now doing it to get someone’s attention for a treat, according to a blog post by St. Louis Zoo Great Apes keeper Dawn Boyer.

In August, Rubih dug up some concrete from the base of a tree and broke a fourth window, Boyer wrote. The windows range from 9 feet to 12 feet wide.

Zookeepers say Rubih had a pattern of unusual behavior that began around December 2014, when she was kicked out of her mother’s nest. That was around the same time her mother was about to give birth to a sibling, Ginger.

“Rubih became, in essence, the odd person out of the group,” Boyer wrote. “She was no longer a kid, but not yet a confident adult.”

Zookeepers are now hoping to train Rubih to drop rocks in a tube regardless of whether staff are around to reward her. They would check the tube periodically throughout the day and reward her if they found rocks.

“Hopefully this will eliminate her desire/need to hit the glass to get attention,” Boyer wrote.

With insurance coverage, the zoo ended up paying $71,000 out of pocket for the new windows. - Orangutan's rock fixation causes $198,000 window replacement at St. Louis Zoo

A park ranger, John Irwin, was traveling through a deserted road at night within the Wharton State Forest in Dec. 1993 and had reached a spot where the Mullica river was next to the road. As he looked ahead his headlights shone on a large dark figure that was emerging from the woods and moving into the roadway. As he got closer the figure stood in front of the car blocking the roadway. Irwin had to stop his car in order to avoid hitting the creature. The creature was described as being over six-foot tall and covered with black fur that looked wet and matted, it appeared not to have any forelegs but had a pair of huge powerful hind legs. The creature glanced through the windshield of the car revealing two piercing red eyes, it stood a few minutes then turned and continued across the road, walking upright like a human in a peculiar robot-like fashion. - Fortean Times

Westworld and the Era of Post-Biological Evolution

The Bizarre Tale of the Mystical Hermit of the Loltun Cave

Debunking The Discovery Of A Dead Dragon


Mind Wars: A History of Mind Control, Surveillance, and Social Engineering by the Government, Media, and Secret Societies

Season of the Witch: How the Occult Saved Rock and Roll