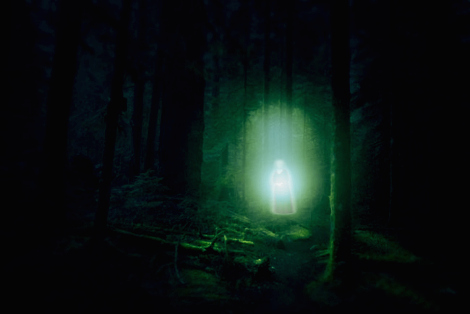 Glowing Apparition Drifted Towards Us!

Elliot in Arizona called in to tell of his ghost sighting:

“When I was like 9 or 10 years old, my mother and my grandmother, we all went on a picnic out in the country to this lake. It was getting dark and we decided to leave. My grandmother took the wrong turn and she didn't realize it. We were traveling down this dirt road for a long ways. She realized that we had gone the wrong way and we pulled up to this driveway. By this time it was night and there was a glowing pillar that we noticed off the side of the road. It was like a blueish white pillar and we started driving up closer to it and I remember my mother started screaming, back the car up!,and she started beating her hands on the dash board and we could see that it was an apparition of a woman and it was drifting towards the car. And so we got the heck outta there. All three of us seen it.”

A 58-year old retired police officer and his wife arrived home together in 4/18/1996 in Wamuran, Queensland. On entering their house he detected a strong smell of sulfur. On investigation he found nothing visibly out of the usual. His wife went to the main bedroom and turned on the lights in the hallway and in the bedroom. She then walked back along the hallway to the living room end of the house. He then walked along the hallway towards the bedroom and as he neared the end of the hallway where Jenny (his wife) had just passed, he walked into an area of extreme cold, which, as he touched it, discharged a strong electrical current, which caused him to reel backwards. He retreated back to the entry to the hall and he was filled with a feeling of revulsion and fear. He quickly recovered and Jenny then walked along the hall and suffered a similar experience. He tried again to walk along the hall and again suffered a similar electrical discharge.

The witness and his wife discussed the situation for a while and tried several times to move past it along the hall, each time with the same result. During this period the 'entity' remained stationary at the southern end of the hallway. Their toy poodle was very much aware that something was wrong and he noticed that when he looked along the hall the guanine at the back of his eyes reflected a bright orange color instead of the usual bright green. The presence of the object could be determined by the feeling of an electrical discharge similar to static electricity though very strong and goose bumps appeared on the skin. Within the object it was extremely cold and quite painful. Upon direct contact one was drained of all energy for a short period and normal breathing was difficult.

Later at 8:30 pm their son Adrian and his then partner, Petra, arrived and he was invited to walk along the hallway. As he entered the hall he encountered the same discharge effect. The entity had moved eight meters and was in the northern end of the hall by this time. Petra, who was eight and a half months pregnant, encountered the object and was seemingly brushed or slapped aside but not hurt by it. Over the ensuing period all four of them had several direct contacts with the entity as it moved with apparent purpose throughout the house. Petra's contacts were much less vigorous than those of the other three witnesses. At 9:30 pm Adrian was ejected from a chair by the entity. Jenny had a severe accidental direct contact with the entity and was caught for a moment within it. She was visibly affected, breathing labored, elevated pulse rate, weakness and disorientation. External check of the premises revealed a column of warm air at the southern end of the house but nothing else unusual. During this period there was no discernible traffic or other sounds within or around the house. Adrian had another hard encounter with the entity. Adrian and Petra returned to their home.

At midnight a ball of light energy crossed within the screen of a television set. An independent witness testified to seeing a huge orange light suspended above the house at the same time, 12:20 am. A neighbor reported that her house shook and trembled for a period. The telemetry from the water storage reservoir across the road crashed and then, impossibly, restored itself. Loud clicks in a cadence of three and groups of three were heard several times throughout the house.

Later some of the witnesses developed symptoms similar to a form of radiation sickness with severe headaches and flu like symptoms, sore eyes and joints, etc. Three developed chronic and permanent tinnitus. The main witness developed a brown-pigmented stain on both legs and a circular mark on the top of his left foot. Several rocks in the garden were discovered to have been affected by some form of energy, one having exploded into a fine powder. A candle had been selectively melted and the stearic acid component separated and crystallized. Moss on the concrete path showed burns marks. Two small sections of the path appeared to have been melted or glazed. Presently two of the witnesses have developed substantial psychic abilities. - The Aussie Connection

A US man who dresses up as Santa Claus fulfilled a dying boy's Christmas wish by visiting him at his bedside, before the youngster passed away in his arms.

Eric Schmitt-Matzen rushed to a local Tennessee hospital after receiving a call about a terminally ill five-year-old boy who wanted to see Santa Claus.

The 60-year-old impersonator said he gave the child a present and a big hug before holding him as he died.

The boy's family watched on from the hallway as they cried, he told the BBC.

"When I felt the life go from him, I looked up, tears running down my face, and looked over at the window and that's when [his] mom started screaming," he said.

Mr Schmitt-Matzen said he had asked family members to remain outside the room if they were going to break down in tears when he arrived for the visit.

"I have to be the happy guy that makes this kid feel great and smile and forget his worries," he said. Read more at Terminally ill boy dies in Santa's arms

12-Ft. Creature at the Ramada Inn

Robert Goodrich and Glenn Towner, reported to police that they were chased off Snow King Mountain by a possible Bigfoot that was 12 feet tall with long, dark hair and arms, which hung almost to the ground. The two men said that they were going to visit a friend who had built a lean-to on the mountain when they encountered the creature.

The men told police the creature breathed heavily and made a moaning growl-type noise. They described the creature as having a simian-like face as big as a stop sign and that the creature was hunchbacked. They ran when they spotted the creature, and that it followed them. The last time they saw the creature, it was standing under a street light near the Ramada Snow King Inn in Jackson.

Neither had been drinking and no further evidence was found. - Idaho Falls Post-Register

'Vampire' Burials Have Been Uncovered in Poland

Ghosts in the Machine: The Strange World of Haunted TVs

15 Creepiest Vintage Toys That Would Haunt Any Children's Dreams

Into the Bermuda Triangle: Pursuing the Truth Behind the World's Greatest Mystery

The World's Most Haunted Hospitals: True-Life Paranormal Encounters in Asylums, Hospitals, and Institutions

The Keepers: An Alien Message for the Human Race