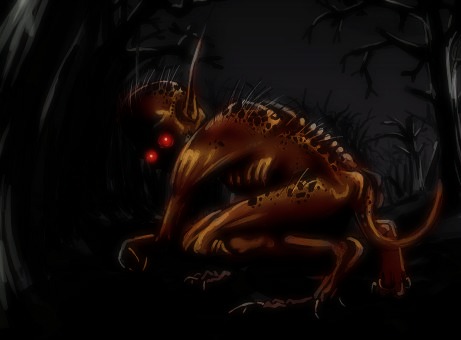 I was RV camping with my Irish Wolfhound, Marty last summer. We were in an old camping ground outside of Naples, Florida. Marty wanted out around 10 pm that night. Not long after I let him out I heard a loud yelping from the swamp. I immediately flooded the area with my handheld spotlight, calling out to Marty. That's when I saw an unusual creature, with eyes that glowed brilliant orange. The creature was yellowish-brown, 2 1/2 feet tall, bipedal, with several foot-long spines on the back. It was hunched over Marty, sucking blood out of of his neck. It screeched at me, and ran off. Marty's neck had two fang marks as he laid lifeless. I heard another scream nearby, so I picked up Marty's body and headed home to the 24-hr vet. The vet said he had never seen this before, and confirmed that Marty had been drained of blood. He mentioned el Chupacabras, from his home in Puerto Rico, but said he had never seen one and thought is was a myth. Colin 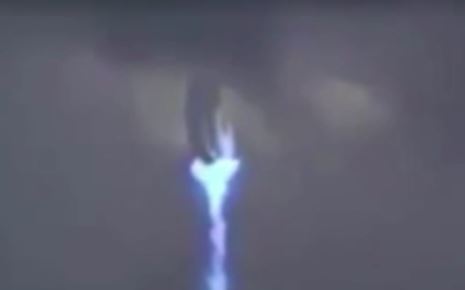 The event – which occurred over Arizona, Texas – appears to show a bright light being beamed out of the sky by a mysterious object.

After several seconds, the supposed UFO then disappears back into the clouds, taking the “wormhole” with it.

YouTube channel secureteam10 uploaded the footage – which has been viewed more than 500,000 times.

“It looks like a massive craft or capsule and finally moves up into the cloud and vanishes,” they said. Read more with video

A warning has gone out to motorists to beware of moose licking the salt off the side of their cars.

The alert, which has been issued by the government of Alberta, was prompted by cases of moose approaching and licking vehicles in Peter Lougheed Provincial Park.

Recommending a 'moose viewing distance' of 30 meters, officials have suggested using a car horn or remote door alarm to scare the creatures away.

"If there is no natural source of salt available they will find an alternate source, like the salt from the roads on vehicles," said Dr Doug Whiteside from Calgary Zoo.

The phenomenon has since become affectionately known as the 'Rocky Mountain car wash'. Click for video 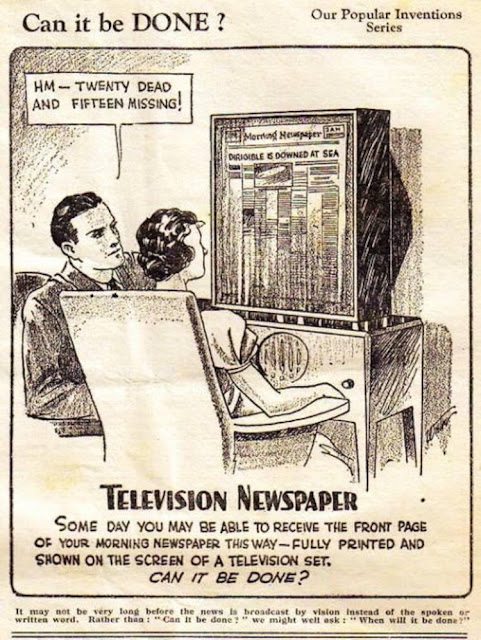 
I would like to ask you...what can be done to 'Phantoms & Monsters' in order to generate more interest?

What features of the blog / newsletter do you like...or dislike?

What other advice can you offer?

...or go to Paypal and use my email lonstrickler@phantomsandmonsters.com as the payee.
Donations by mail can be sent to:
Lon Strickler
514 Broadway
Hanover, PA 17331 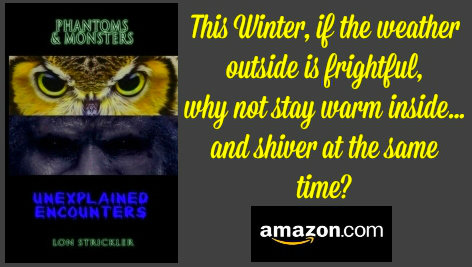 Why Cougars Are Coming to Town

Eerie past of the 'haunted' theme park: Attraction built on an Indian burial ground has been abandoned ever since SIX people died there in a string of accidents

Creepy Unexplained Mysteries and Enigmas of the Internet