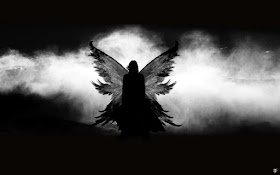 I was on my way home from Chester WV. with my girlfriend. We were on RT 68 between East Liverpool Ohio and Midland Pa. along the Ohio River. It was in December 2010. The time was around 3 am and a thing that looked like a black angel flew in front of my truck, it was about 6 ft tall and was so close we both ducked. What ever it was came from the river side of the road. I wanted to go to the Midland Pa. Police but my girlfriend said they would think we were crazy, we often talk about this but that was as far as it went. - witness report

San Antonio, TX - 2016-07-12: I would like to discuss this event with a person it is too much to write about with my phone. A friend and I gave a ride to an individual in a baggy army uniform. This person was too short to have been accepted into the military and it's appearance was very strange. My friend (a veteran ) and I gave this entity a short ride. Later, we reported this to the military police at Fort Sam Houston. The officer on the phone was belligerent, and eventually hung up on me for no obvious reason. There is more I would like to discuss about this event that would flesh out this event. Thank you. There was no craft involved, just a lone being on a rural road near a major installation and needing a ride. - MUFON CMS 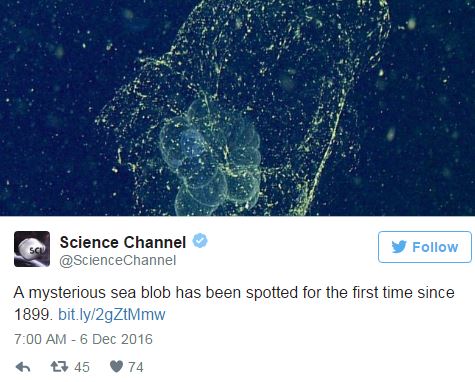 A strange-looking invertebrate has been spotted by a deep-sea ROV over a century after its discovery.

With its translucent body and ethereal otherworldly appearance, Bathochordaeus charon was first observed all the way back in 1899 by Prof Carl Chun of Leipzig University during an expedition to explore the depths of the South Atlantic.

Believing it to have originated from the bottom of the sea, he named it 'Charon' after the ferryman who in Greek mythology is tasked with transporting the souls of the deceased across the river Styx.

Further accounts of the creature however have been scarce with only a few being reported over the last century. Of those examined by scientists, none seemed to exactly match Chun's discovery.

Now though, Rob Sherlock of the Monterey Bay Aquarium Research Institute has finally managed to locate and even capture one off the coast of California using a remote-operated vehicle.

"Since the vehicle was recovered some tens of minutes later, the animal was alive, in fantastic shape, and we preserved it right away in order to send it to the Smithsonian," he said.

"We had no idea, until we looked more closely at the specimen, that we had actually found B. charon, the species first described over a hundred years ago."

"It felt like Chun had finally been vindicated after years of doubt." - 'Mythical' Sea Blob Finally Spotted a Century After Its Discovery

In 1970, My mother and I saw a bird that followed the car up a mountain road near Maysville, WV. We saw only the tail and the underside of this animal. It's wings were almost as wide as the road. This animal repeatedly flew over the hood of the car as we drove. It did not have a feathered tail - it's tail looked long and coiled up. It was dark in color.

When we witnessed this I told my mother that I looked like a prehistoric bird. This animal was much larger than a turkey, turkey buzzard, owl, eagle, hawk or any other bird of prey that I have ever seen. It had a broad heavy body. In fact it looked so large that it had trouble getting airborne and it used the path of the road to get up in the air. This bird looked large enough to easily take down a dog or deer-sized animal.

I cannot say that it had any man-like features but this was something that both myself and my mother still remember. I have to believe that other people witnessed what we saw and I can see why they called it Mothman. This is a true story - for obvious reasons I can see that people blow it off as untrue but we know the truth. I know another person in Maysville, WV that has described something similar. He explained to me he did not know what it was but it was as big as the highway is wide.- Witness correspondence

Is the Loch Ness Monster a Sturgeon?

Behind the 'Curse of the Man Who Sees UFOs'

Is this the first written mention of Jesus? 2,000-year-old lead tablets found in a remote cave ARE genuine, claim researchers


Strange Creatures From Time and Space

The Ultimate Hitchhiker's Guide to the Galaxy