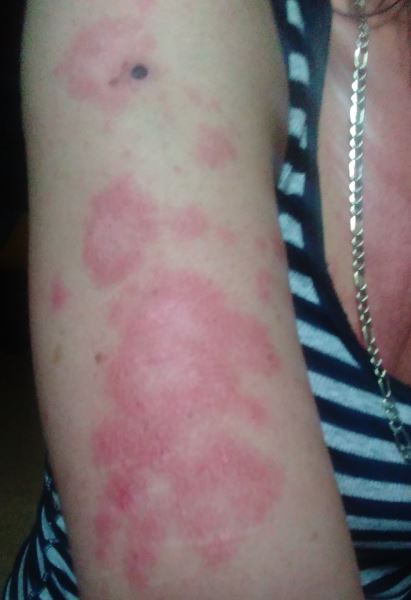 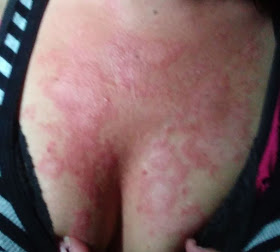 Attacked by Unknown Light From Sky

Kirkwood, PA (Lancaster Co, PA) - 2016-06-05: I was walking my dog in the front yard. I was hit with a light. It felt like it went down in me, then back up..it felt like it lifted my upper body up just a little bit. I felt expanded. I felt like I was energy and light. When I looked at everything, it was covered in shimmering light. The grass, the leaves, my arms. When I looked around, my movement felt like it was flowing. It stopped after about 10 secs. Then for about 20 mins after, I would get a small glimpse of that feeling, and I would get goosebumps up and down my arms, and a warm feeling across my chest.

The next morning I noticed a rash starting on my chest and arms. It spread very fast. Across my chest, down my shoulders, arms and tops of my hands. Everywhere that was exposed the day before. I saw a dermatologist. They do not know what it is. They tested for cancer...negative. They gave me a steroid...didn't work at all.nothing will help it. I still have the rash..it wont go away. Its itchy, bright red, and is kind of shaped like leopard spots. If I'm in the sun too long...it puffs up a little. Then it goes flat again, but hasn't gone away or gotten any lighter. I have also been hearing things in just my left ear since then. I hear humming, ringing, text tone sounds, and a few times I have heard people talking...some in different languages, being changed every couple secs, like channels on a radio station. - MUFON CMS

A young girl was sent by her parents to gather fruit in the area just before supper. However, the girl never returned and a massive search was conducted all over Tenerife for her. She was never found. However three decades later (in 1958), the young girl reportedly returned; looking exactly the same as the time that she disappeared. According to her only 15-20 minutes had gone by. According to the girl; as she was collecting pears from a pear grove, she noticed a very tall figure dressed in white standing near her. Strangely she felt no fear but instead felt a strange attraction towards the figure. The tall entity then invited the girl to follow him, and she immediately accepted.

The girl accompanied the stranger into a nearby cave where there was a descending set of steps which the girl followed the white-clad stranger down. At the bottom of the steps there was a garden in which there were other similar white dressed entities. The girl remembers speaking for a few minutes with the strange group and later was guided back up the steps by the initial entity which then bade farewell to the girl. Incredibly to the girl, it had only been missing 15-20 minutes but in actuality 30 years had gone by. Apparently the investigators were frustrated by the lack of cooperation by the local authorities about the event; only one local elderly woman came forward and suggested that the “Girl of the pears” might still be alive.

Comments: Year is approximate. Time and space seemed to have been compressed inside the cave; while outside it remained “normal.” Or maybe the girl was momentarily thrust into the future and then returned?

No one knows why more than 200 red-winged blackbirds fell from the sky in South Jersey.

Just ahead of Thanksgiving, scores of dead birds rained down on Cumberland County. It was the second time in less than a month that saw birds mysteriously die, with a similar incident occurring in a North Jersey farming area earlier this year.

Following the most recent incident, DEP’s division of Fish and Wildlife cleaned up the birds and collected some to send off to the state lab for necropsy, toxicology and histopathology tests.

“We did ascertain that the birds suffered trauma and internal bleeding from hitting the ground,” Hanja told the news outlet. “But what made them fall from the sky in the first place ... we can’t say for certain.”

Hanja said experts still can’t fully rule out pesticide poisoning, but testing on wheat seeds from a nearby farm also yielded no answers. Read more at 200 red-winged blackbirds fall from the sky and die in New Jersey

How the Bible has been rewritten over the past 2,000 years

The Biggest Solved and Unsolved Mysteries of 2016