A Mission From Mars 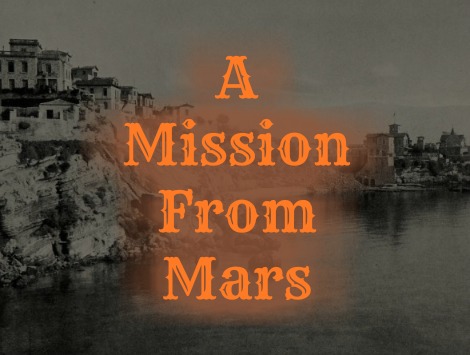 T. T. Timayenis was lounging near the Phaleron; a romantic spot by the sea. As he stood upon the rocks gazing out over the sea, he was lost in thought when he happened to glance to his right and noticed two young men who were seated about 40ft from him; upon the rocks. Both were tall; towering more than a head above the average man. The witness stared at the two strangers, noticing that they were gazing upon the stars through a large square piece of what seemed to be unusually bright glass. His eyes could hardly withstand its brilliancy and as he looked upon it with astonishment, he saw the planet Mars and its whole array of life unfolded before his eyes as clearly as one sees a performance upon the stage of a theater. He saw the two strangers lifting their fingers and holding conversation with its inhabitants. He saw the people of “Mars” answer in a sort of language. He saw women and girls of surpassing beauty, tall and stately, with forms “which still haunt his dreams.” He also saw birds of a beautiful plumage, flitting about and alighting upon the shoulders of maidens. He saw many amazing sights and heard lovely melodies.

After a while the two strangers withdrew their gaze from the planet and in the twinkling of an eye, Mars shone upon the firmament in its accustomed place. The astounded witness walked towards the two strangers; as they saw him they moved about and asked him in excellent Greek if he could spare a light. The witness offered the strangers matches and cigars, which they accepted. In turn they gave him one cigar, which they stated they bought in Cuba the day before. The witness was more astounded as he told them that Cuba was more than 4,000 miles away. At this point the two men told him that they came from the planet Mars.

The two strangers then proceeded in detailing an incredible tale of civilizations on the planet Mars and ancient strife between different groups. Their enemies, which they called “Pelasgians,” were eventually defeated and their survivors fled in their airships and landed in the northwestern part of Greece in the land known today as Albania. They were apparently the first settlers of Greece. They then added that the civilization on Earth was (in 1905) 100,000 years behind the Martian civilization. They also then added that there had not been war on Mars for over 200,000 years and incredibly they had also discovered the secret of immortality. According to the “Martians,” in electricity lay the secret of perpetual life. Every morning the Martians were supposedly “fed” electricity as an antidote against death. The two strangers claimed that the philosophers Socrates and Demosthenes were not dead but were currently alive and well in Mars.

Soon the sound of a shrill whistle from one of the Martians (Telemachus) the other called himself Phidias, was answered from a boat by two stalwart men, who immediately jumped into the water, which was no less than 60ft deep. They wore about their feet; long protruding skates of bright yellow metal, strapped with stout wire. This equipment enabled the Martians to glide with safety upon the water. The witness and the two Martians were then brought inside a magnificent floating airship; there they dined and he was informed that the main objective of their current mission on Earth was to meet the inventor “Edison” in relation to a recent invention, which could prove fatal to humanity. He was then brought back to shore and bade farewell to the Martians.

Mars: Our Future on the Red Planet