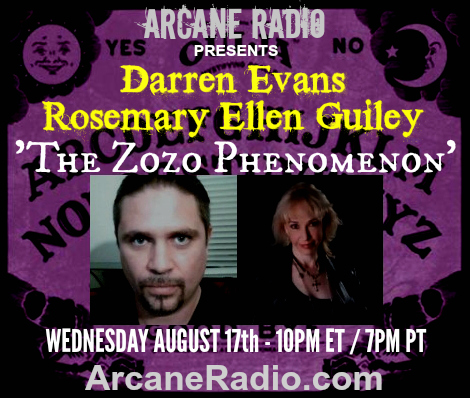 Darren Evans and paranormal expert Rosemary Ellen Guiley have written the ground-breaking book 'The Zozo Phenomenon.' Darren is a paranormal survivor who learned about Zozo the hard way...and took his story to the world. Darren was featured on 'Ghost Adventures'...as people around the planet responded with similar stories, and some that were even more shocking. This should be a great show!

I recently read The Zozo Phenomenon

an intriguing look into the bizarre & malevolent world of Ouija. The authors, Darren Evans & Rosemary Ellen Guiley, describe the title as follows:

For decades, unsuspecting users of spirit boards have been pestered and attacked by a malevolent entity that calls itself Zozo, the “king of kings.” Evenings of entertainment have ended in anxiety and fear, with lingering problems ranging from hauntings to dream invasion to psychological terror. Darren Evans is a paranormal survivor who learned about Zozo the hard way—and took his story to the world. People around the planet responded with similar stories, and some that were even more shocking. In this ground-breaking book, Darren Evans and paranormal expert Rosemary Ellen Guiley probe the mystery of Zozo, from ancient gods to modern aliens, demons, and more. Who is Zozo, and what does Zozo want? The answers will surprise you!

'The Zozo Phenomenon' is a detailed no-nonsense & real-life experience outlined by the author. His account mirrors many that I have heard from others who have used this divination device. All spirit communication tools have a 'dark side'. The Ouija or spirit board seems to have its own unique issues, by capturing the subconscious of the users and creating a conduit to an malevolent astral plane. I'm glad that the theory of thought-form manifestation is covered in the book. This closely connects with my reasoning to this phenomenon.

There are several arguments as to the actual identification of 'Zozo. Each is presented effectively...though it's important for the reader to make up their own mind as to the reason why this entity exists. Very interesting and entertaining read...I highly recommend it.

Did Insanity Create a Shadow Man?

Shelly wrote in to tell of her shadow man encounter. Host Dave Schrader believed that it may have been an example of a Tulpa:

“My first husband became mentally ill after we wed. As the years went on he got worse and scarier. He had the Charlie Manson look at times. When we finally broke up and he moved out, we started seeing a shadow person. My son quit sleeping in his room and I would be woken up by something sitting on my bed and putting their hand on me. We had a preacher come and try to get rid of it and have the house cleaned and blessed to no avail. We finally had to move out. I have no question that this thing was created from his insanity.”

Reincarnation: Children Who Remember Their Past Lives

Aleister Crowley and the Ouija Board

Ouija: The Most Dangerous Game