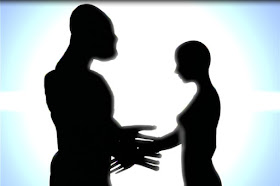 By Chris Holly - I could not sleep one night and ended up watching videos on Youtube to see what is new in the subjects considered unknown or unexplained. I was entertaining myself when I came upon a video in which an interview was going on between a young man who was a self-proclaimed UFO/ Alien researcher and what looked like a typical older woman. She was a pleasant looking woman well into her 60s who looked like many grandmothers out there. She was sitting in a living room that looked like a grandma living room that was located somewhere in a hot desert like area of the United States.

It did not take long for this to turn from a scene from Nana's sofa into something completely bizarre and disturbing. I listened and became stunned at the conversation going on between this young man and this older woman.

The premise of the conversation was that by way of messages she gets from different places like the radio and television that she plays in reverse aliens have conversations with this older women. Of course, she also receives messages via telepathic methods from aliens too. She claims she has long detailed conversations with the aliens who talk to her about what they are doing and how they do it. Her conversation with this young man was a bit strange as it was very sexual and made my skin crawl a bit I will admit.

At first, I thought this was a joke. Sadly it was not. It was a serious interview. The old woman went about telling this young man who hung on every word how aliens love to come and take over our bodies so they can have sex, drink alcohol and use drugs as well as smoke cigarettes and gamble. They love Las Vegas and often take over our human bodies to do all of these things on weekends at Vegas getaways.

I started to laugh, it was so ridiculous. She went on to claim that the aliens do this to have lots of sex with humans so they can impregnate humans or collect male sperm in order to produce a bunch of half alien half human babies. I waited for the young host to question how this could be done but he only swallowed each ridiculous word this old woman told him as truth and never asked one question.

The woman claimed that the aliens would pick out the humans they wanted to use for the purpose of drinking, drugging , and to have sex among other things and would remove the human's soul and place theirs into the human body while going on a joyride to Vegas. A huge amount of questions immediately came into my mind yet the young inexperienced host asked nothing at all concerning this soul issue.

The first thing I wanted to know was where did the human's soul hang out while waiting for the alien to return to his or her own alien body? Did it just float around at home or jump into a closet and wait in there or binge watch some TV while the alien took off to gamble , drink , do some coke and have huge amounts of unprotected sex with those they found willing to do so with them? And, what happened to the alien body when it had its soul leave and jump into the human's body? Just little questions but ones I wondered about

The fact of the matter is the entire thing was so stupid and insulting to anyone who could think that it could only be considered an insult to one's intelligence and a giant joke.

Then I read the comments. Thankfully there were many comments like my own talking about how ridiculous the video was, however, there were also far too many who took this garbage seriously and believed it. It was obvious to me that the old woman had major sexual dysfunction issues going on and the silly kid making believe he was a researcher a pair who should have never been matched up. However, many people actually took this trip to fantasy land as something that really happened.

I started to look around and found far too many other video topics like this one where alien-human sex is discussed on the level of a bad cheap movie where they make up all kinds of silliness to entertain and make a fast buck. It is incredible that people just blindly think any of it could be true, but sadly they do.

Now I feel the need to throw my two cents into this subject matter about alien / human sex before we all get lost in the world of bad movies, ridiculous videos and trashy papers sold at the cashier's stand where we shop.

A dog and a cat cannot sneak under the porch for some private time to make and then have a barking kitten baby. An elephant and a duck cannot have a walk in the woods alone and end up with a 'duckphnat' baby, A fish and a big foot cannot have a night in a tree house and have a little hairy fish foot baby. A human and an alien most likely cannot have a weekend in Vegas and have a baby either.

Different species cannot mate and have an offspring. Different species may not even have the same type of genitalia. Some species may lay eggs, others give birth, who knows what an alien might do. It is very possible aliens do not mate at all and divide in two like giant cells instead of reproducing like we do. Maybe they have special members of their population who lay thousands of eggs or have litters of hundreds of little critters, or maybe they are produced full grown and built by machines. The one thing I know is that unless they are the same species or human like us we cannot reproduce with them by having sex. I doubt we have the same equipment to have sex with in the first place.

I know we all have heard stories of women who claim they have carried hybrid children made by way of sexual encounters with aliens. I think unless the aliens were humans this is a bit impossible. I also think if it were an advanced human group needing a woman of today to mate with that they would keep the woman not return her. It is possible that human pregnant women have been taken and returned without their growing human fetus. I think this is a terrible part of abduction but admit that it is possible. Aliens may want to use a human fetus for experimentation or as living material. I realize this is a terrible thing to think about or write about so I will leave this said and pray it is not a common occurrence.

I watched a show where two very out of shape women claimed they carried hybrid babies for months before being taken and having the babies removed to be completed in alien labs. I think this again is insulting our basic intelligence yet taken as truth by people who are not thinking it out.

Why would aliens go to the trouble of taking women who were in terrible shape, to begin with, spend the time to do the splicing and extreme biological procedures needed to impregnate them to then return them to earth?

The women could take medications or eat badly or smoke or drink or many things that could destroy the mission at hand. They would either keep the women or just take what they needed from them to develop what they wanted to make in their controlled lab and throw the women back to earth until they wanted more human material. That is what I think goes on but I do not think human women carry, have sex as we know it or give birth to alien children. All of that would be done in a very controlled science lab by aliens. I do believe some humans are used like human farms for biological material for hybrid development but past being used for biological material all else is done in tightly controlled alien science labs. An experiment like that would be done under strict scientific controls without question.

I am sorry but I think that all of this is simply science we do not yet understand and logic is needed when thinking about how this would be done by those far more advanced than we are. I believe they are trying to or do make new species that may be used to populate the universe but it is not in the way these silly people looking for fame and fortune describe. We suffer from a rabid case of Hollywood and media brainwashing fantasy in a massive form that provides complete confusion and delusion concerning all of these things leaving us stuck in the dark ages instead of reaching for logical answers.

I know one day in the future we will understand all of these things as well as other topics we now consider unknown. We are only now entering our way out of our horse and buggy world and have a long road of learning ahead of us before we can catch up to or understand our more advanced cosmic neighbors. We are surely very primitive to those who can travel this universe with ease. Keep in mind who is visiting who if you start to feel we are even remotely equal in any way to those far older and more advanced. We are barely out of the caves.

We would get there much faster if we used the information we do have in a better way and could stop the ridiculous frauds and fakes from clogging our path.

Sadly that is not our way or how we seem to want it. We go out of our way to stay deaf, dumb and blind to anything we do not understand.

With that in mind, I say someday we will know, but for now, we will dream of green lovers who visit and take us on flights of fancy and will remain stuck in stupid just a little bit longer. Oh well, I try, So many have so much good data to share but are shy to come forward due to those like sex crazy Nana and her alien pot smoking, beer drinking alien Vegas gang. Until we clear them out and correctly collect the real truth from good people we will remain as is, lost in space.

Meet the Hybrids: The Lives and Missions of ET Ambassadors on Earth