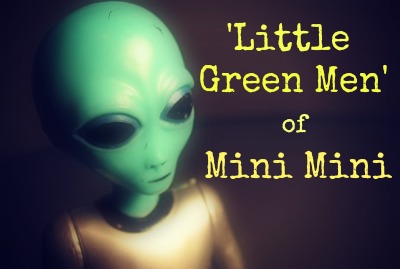 The following article was forwarded a while back by my friend & colleague Albert Rosales - Humanoid Sighting Reports & Journal of Humanoid Studies:

Of course we have all heard (to our chagrin) the term ‘little green men’ or LGM in Ufological parlance. The term is mostly used by the ignorant press and debunkers when it comes to encounters with so-called UFO aliens. But we all know this term was never initially used to describe supposed aliens from outer space, and nowadays is a favorite of the skeptics and most of the press. However and incredibly LGM’s have been encountered by unsuspecting witnesses on different occasions, perhaps not initially called such by the witness, but green and little to be sure. There is a bizarre episode that describes exactly this type of humanoid or ‘alien’ if you will (and there are indeed others!). This specific episode is little known and it occurred in the ‘Enchanted Isle’ or ‘La Isla Encantada’ mostly known as Puerto Rico.

The year is 1991, a prolific year of high strangeness encounters with strange humanoid type beings in the island of Puerto Rico, the location, the little town of ‘Mini Mini’ in the Loiza district. The incidents were investigated by the renowned Puerto Rican UFO investigator Jorge Martin and published in the now defunct magazine “Enigma” specifically issue number 42.

It all began on the afternoon of May 14 1991 as two young men playing on an isolated field came upon a small circular silvery metallic object sitting on the ground. The strange object was very shiny and had a small dome-like protrusion on the top. The boys approached the object and out of curiosity began touching it. Suddenly a small hatch opened on the bottom of the craft and a long thing ‘green arm’ came out grabbing one of the boys by his leg. As the boy struggled to get away a second thin green colored arm emerged and grabbed him by one of his arms. The terrified boy grabbed a piece of wood and began striking the green colored arm. He somehow managed to cut off one its appendages (fingers?) and the creature (or whatever it was) let go. The “finger” fell to the ground and began oozing a green liquid. The two panicked boys attempted to retrieve the severed appendage but dropped it during the confusion and panic. They both fled but later returned to find both the object and the appendage gone. Wow! So far so weird, but it didn’t end there, there was more to come.

That same night an adult witness was looking out his bedroom window when he briefly spotted a short green skinned figure with large pointy ears, a pear-shaped head, and large red oval shaped eyes. As he watched dumbfounded, the figure quickly scurried away into the brush and disappeared.

The next day, May 15 1991, in the afternoon, on the grounds of the local elementary school a short green humanoid with red oval-shaped eyes, and huge pointy ears, apparently approached and attempted to communicate with one of the kindergarten class children. It spoke to the child in a strange “chatter-type” language and it ran quickly into the brush as some of the other children approached.

What appears to have been the last episode occurred on the same day near the spot of the previous encounter, two boys were playing near a wooded area when they heard a noise and saw a strange being emerge from the woods. The being was described as short and bright ‘green in color’, with an oval-shaped head, large almond-shaped eyes and huge pointed ears. It was thin with very long arms with ‘three digit hands’ the being stood looking at the witnesses emitting a strange ‘chattering’ noise. The young boys then threw fruits at it then chased it, but it ran quickly and disappeared down a drain aqueduct. At one point the being grabbed one of the boys by the foot making him fall.

What are we to make of such reports or encounters? Why would anybody want to report encountering a ‘little green man’ or alien, known full well the connotations that come with it? But like I mentioned before these were not isolated cases, the little ‘Grays’ have company, and they come with a livelier color.

It reportedly took place in the small town of Huinca Renanco, Cordoba province, Argentina around 755a.m. on August 9 1994. According to Pico 9-year old Silvana Zaccari was on her way to school walking down the middle of the street as she usually did when she suddenly heard a loud buzzing sound coming from behind her. Turning around she saw a black small oval shaped object with what appeared to be a square glass window hovering low above the road. Behind the window she saw a humanoid face with what appeared to be “three” green colored eyes. A small door opened on the bottom of the craft and a long “hand” came out grabbing a hold of a medium sized pine tree in front of the witness’s house. She then heard some footsteps and screamed. The door suddenly slammed shut and the craft rose up and disappeared into the distance flying at a low altitude. A second girl, Yamila Carmona also saw the craft flying away. Silvana described the hand as being green in color with three long fingers. The craft had multicolored lights on its body.

I am sure that little Silvana did not have a subscription to “Enigma” and wanted to duplicate in her mind the events reported in Mini Mini. The parallels are astounding. Childhood fantasy? I tend to doubt this explanation, as far as I am aware there were never any forthcoming explanations to the events in Puerto Rico and Argentina. 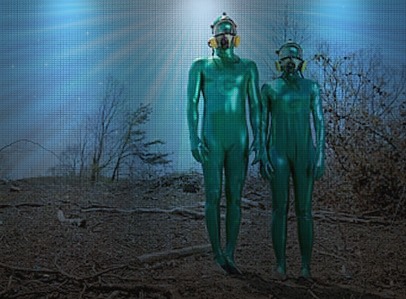 Extraterrestrials and the American Zeitgeist: Alien Contact Tales Since the 1950s