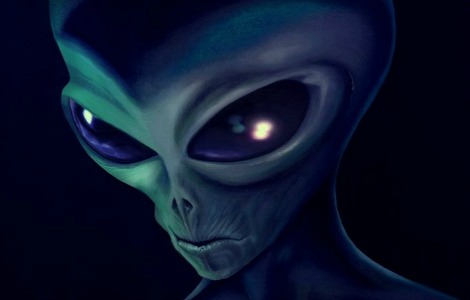 Broaddus, TX - 8/1997: I was in bed facing the window when I saw a saucer shaped object hovering above the ground with colored lights pulsating off and on. I was in my country home of TX. I remembered being very sleepy. Then next, I was on a metal table surrounded by grey creatures with black eyes. This was not the first time. One was their leader who communicated to me telepathically in English. I recognized him from 1974, in which he caused me great pain, yet promising me he wouldn't hurt me. I never saw a craft then, just being afraid in driving home, feeling like I was being followed in Missouri. This time he said the same thing, "I won't hurt you". In 1974, I never told anyone not even my husband then. I was too afraid to talk. The grey lied to me then. What he did with an instrument was torture. I remember screaming. The others seemed as students and he was teaching them how to approach a human in 1974.

Again, he seemed to be teaching a group of three. I told him, he lied. He seemed taken back by my choice of words, but continued. The instrument was shaped like a silver pen in which a light pulsated as he pressed on it. He ran it over my scalp, in which pleasure ways the outcome. I didn't want him to stop. I somehow knew it was an instrument to block pain. When he stopped, he said, "See, I didn't hurt you". This was the first time he and I communicated back and forth. The next thing I knew is that he and the space craft was gone and I was no longer afraid of them. He, the instructor, never seemed to age as us. He looked exactly the same in 1974 and 1997. I can't remember any more events. I have no photos, or videos to prove my story. Except my word - MUFON CMS

WAYNE, W.Va. (WSAZ) -- Shoppers couldn't believe who was behind the wheel after a car crashed into the Wayne Walmart on Friday.

A witness tells WSAZ she was standing in front of the store when she noticed a car started moving from its parking space at the front of the lot in her direction.

The woman says the car slowly moved straight toward her, and she at first guessed the driver was someone she knew who was messing with her.

That is until she noticed the face of the driver was a dog's.

The woman got out of the way, and the car crashed into the store.

She says a second dog was in the passenger seat, and after the wreck that dog somehow managed to roll the window down.

The store paged the owner of the car, who turned out to be a woman the witness described as looking to be in her late 70s.

The car owner said she left the car running while she went into the store so the dogs could stay cool, and the dog had managed the get the car out of park.

An employee with the store said the dogs were fine and there was minimal damage done to both the building and car.

The Wayne County Sheriff's Department responded to the scene.

The owner was able to drive the car home after the crash.

Hi, my name is HP, I'm from Dallas, Tx. I would like to share with you, the little (big) experience I had back in the summer of 1995. I saw you had a story similar to mine. My friends and I were heading to taco cabana a restaurant located in lower Greenville ave. here in Dallas. It was around anywhere from 4-6pm where I decided to go into the parking lot to get a box of cigarettes. I've always had this tendency to look up at the sky ever since I was a little kid. So, as I grab my cigarettes I look up at the sky and I saw this very BIG creature, it was so big that I don't know if I was more amazed at the size of this creature or to wonder how it can hold itself in the sky from how big it was. It kind of looked like it was trying hide into the clouds or maybe there was too many clouds, not too sure about that. I saw the wings, body & tail, but could not see the face like I said the clouds were kind of in the way or it was trying to hide. If I had to compare it to any thing it would be a dragon, but very much different and unique. I remember every little detail such as color, pattern of the skin. Ever since that year I've been doing my research on it and saw a lot of "big birds" in the sky stories like mine, from Dallas to Peru and all over the world. This is how much it's impacted me, so when I came across your website I thought I would get in contact. Thank you.

Lon - I had several encounters in California. See the right side of drawing -short black hooded shadow. 4' tall Two years ago at my luxury apartment I woke up around 4 AM and looked at the shadow by the bedroom door frame. The blackest solid body without eyes or mouth. It did not move at all. As half sleepy I got up and walked by the door -2 yards away from shadow to the bathroom and got back in my bed. It still stood and I went sleep. Around 5-6 AM I woke up and saw it still stood by the door. I stared at it for several minutes as I was trying to figure out what or why it came for ... My time ? or I did not get any feeling from it. I went back to sleep. 7 am it was gone. it happened once.

First left drawing- at brand new house in Surprise, AZ a decade ago, while I was watching tv with my cats in living room with open kitchen room at night time. I spot a dark shadow on the hallway few times. Every night after 9 PM it appeared I looked at it, saw nothing so I looked away and could see it on my side of eye. It floated from hallway toward kitchen island. I saw it directly and caught its appearance. Lasted few seconds. I kept cool myself because I was alone with cats. I used my bible verse to tell it go away and in name of Jesus. No feeling from it. My cats did not react at all. The light scones were turned on in the hallway, it never show up.

Bottom of drawing. one year and half ago my 20 years old cat was dying from kidney problem. In the afternoon I saw the flag like gray and dark gray strip was floating on the wall of hallway. It appeared 4 times on same day and night. I simply ignored it. In the evening 6 pm I was talking on skype with my friend she and her 6'6" tall hubby saw it and they were scared. I told them I knew. It went through between me and them on the skype screen. Shortly my cat died. 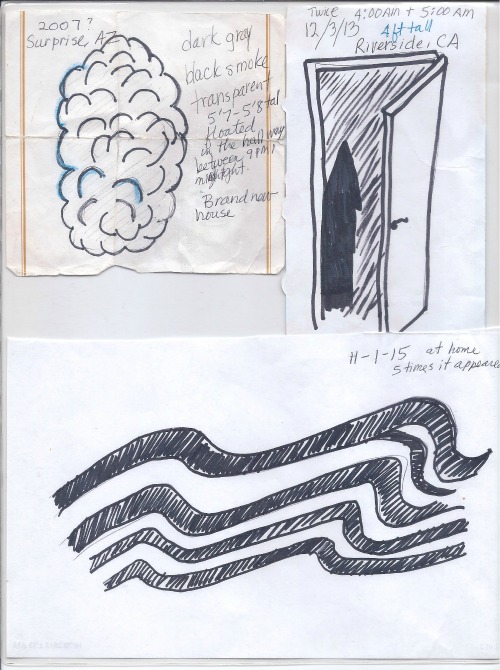 ...or go to Paypal and use my email lonstrickler@phantomsandmonsters.com as the payee.
Donations by mail can be sent to:
Lon Strickler
514 Broadway
Hanover, PA 17331
THANKS FOR YOUR SUPPORT
**********

NASA plans to launch study of asteroid that could destroy Earth

Is your leather from China? It might be made of dog or cat skin


Walking Among Us: The Alien Plan to Control Humanity