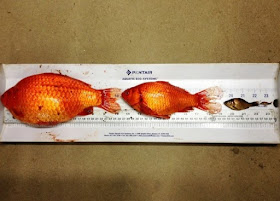 Consider this your annual reminder: Don't dump your pet goldfish into a lake.

Invasive species are, generally speaking, not so great. When an organism moves into a territory where it lacks natural predators, it can interrupt the entire ecosystem by scarfing down local resources and killing important species.

You've probably heard of a few of these troublemakers: Goats, placed on the Galápagos Islands by sailors who hoped they would breed and provide a reliable food source during expeditions, obliterated local greenery and left majestic giant tortoises endangered or even extinct. Asian carp, imported to help control algae growth in water treatment plants and aquaculture farms, may soon make their way into the Great Lakes — and as if outcompeting local species weren't bad enough, the carp have a tendency to hurl themselves up into the air and hit boaters like fast-moving bowling balls. The repulsive New Guinea flatworm could wipe out every snail in Europe, according to some scientists, leaving birds without one of their favorite foods.

But some invasive species start out as beloved pets. In Australia, 20 million feral cats — descended from animals brought in by European settlers — have been fingered as direct threats to at least 124 of the country's threatened species. According to a new study, there's at least one other pet that could be wreaking havoc on Oz: goldfish. Read more at If you dump your pet goldfish into a lake, it will grow into an enormous pest 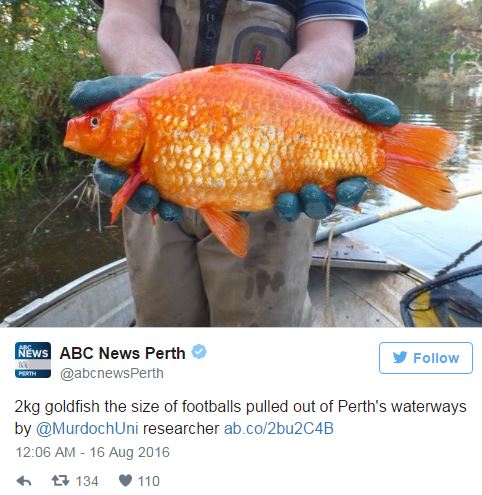 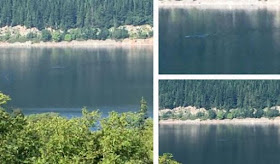 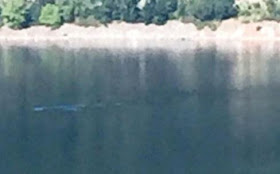 Holidaymaker reckons she has captured the Loch Ness Monster on camera.

Gobsmacked Calley Tulleth, 28, was having lunch on the balcony of her holiday let when she saw a mysterious ripple on the surface.

Her eyes "popped out" of her head and she grabbed her camera to capture a few snaps.

The mother-of-three said: "I was having my lunch on the balcony looking over Loch Ness and all of a sudden I saw this blue thing swimming across.

"I wasn't scared but my eyes popped out of my face.

"I quickly took my phone out and started snapping away - I tried to zoom in and get a better view but then it just disappeared.

"It looked so much like the Loch Ness monster."

Calley, a housekeeper from Fife is on holiday at Loch Ness with her husband and three children.

"I can't stop thinking about it," she added. "It's not often you see a monster while on holiday." - Holidaymaker 'captures' Loch Ness monster on camera

Leeds, AL - 2013-09-18 - 7:00PM: I was simply driving from my home in Birmingham to a friend's home in Pell City via I-20. I was well-rested and sober, the sun had set some time before. I first noticed the object as exceedingly bright light in my rear view mirror, and assumed it was a car behind me harassing me with its high beams. Looking back turning my head and by using my mirror, I could see this object following along the highway at about 100 feet above or less, and all you could make of it was that it was extremely bright. It was going along the highway at probably about 85 mph because it overtook me after a bit, and as it went the path it took was brightly lit i.e. like the sun was up. For at least an area a couple football fields, this object was so bright that it lit up the ground like daylight and it was so bright that one could hardly see when it was within about 200 feet. After passing me, I decided it wasn't a helicopter or anything and concluded it must be some sort of drone. However, after passing me, it gained speed in what I guess I'd call an exponential manner, speeding up to about 200 mph over the course of a couple seconds, and after following the road about half a mile then adopting an upward trajectory. It was then that it started to gain a lot more speed, and I was slowly starting to doubt that it was any sort of drone or anything when it suddenly zipped into the sky, going so ungodly fast. It had not even gotten 3000 ft off the ground when it became so fast that it became a dot in the sky and disappeared. When I first saw the object I was annoyed, then I was confused, and finally I was briefly horrified and full of disbelief. I want to say it was some kind of ball lightning, except this was huge as far as ball lightning goes(the size of a car) and it was more oval-shaped to the point that it was almost shaped like a car(no features just elaborating on the particular kind of egg shape). I couldn't believe it when I first saw it, I told my friend when I got to his house and I assumed it would later be on the news; it wasn't. - MUFON CMS

Fourth 'brain-eating amoeba' case of the year being treated

An unidentified patient in Florida is being treated after being infected with a brain-eating amoeba last week, according to the Florida Department of Health. It is the fourth known case this year of infection by the parasite Naegleria fowleri.

"We believe that the individual contracted the infection after swimming in unsanitary water on a single private property," said Mara Gambineri, the health department's communications director, noting that there is no risk to the general public.

The parasite is almost always deadly. According to the Centers for Disease Control and Prevention, between 1962 and 2015 there were 138 known cases of primary amebic meningoencephalitis, the infection caused by the amoeba, and only three of those patients survived.

Individuals become infected when swimming in warm freshwater, such as a lake or river. The amoeba enters the nose and then goes to the brain, where it destroys brain tissue, causing swelling and death. Symptoms begin between one and nine days after exposure and include headache, fever, nausea and vomiting.

It can be confused with meningitis at first. Then a stiff neck, seizures and hallucinations begin as the infection becomes worse. Those infected die between one and 18 days after symptoms begin. Read more at Fourth brain-eating amoeba case of the year being treated

Someone Filmed a Fake Human Sacrifice at CERN


Toward the Light: Rescuing Spirits, Trapped Souls, and Earthbound Ghosts