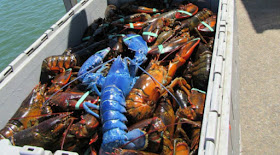 DEVON (Web Desk) – A fisherman got an exciting surprise in his catch earlier this week when he found a 2-pound lobster in his trap, the color of a sapphire. According to experts his catch is an extreme rarity, occurring in about one in two million.

Wayne Nickerson, owner and captain of FV Windsong in Plymouth, was the lucky fisherman who has been fishing for lobster for over 35 years, ABC reported.

“The lobster went to a nice cool tank so he wouldn’t die. He is fine…. healthy and happy,” Jan said in a comment on her Facebook photo.

Lobsters caught of the Atlantic coast don’t usually come this bright. Normally they are a murky, greeny-brown until they are boiled into an orangey-pink. This color is a more familiar for lobster diners from Ocean City, Maryland to Cape Cod, Massachusetts.

According to the Lobster Institute at the University of Maine, “only an estimated one in 2 million lobsters is blue.” But its executive director, Rob Byer, admits that is merely a guess.

Hey folks...I'm really getting perturbed by others on YouTube using our upright canine investigations. It's coming to the point where I'm thinking about curtailing posting any information on these sightings. You folks can help by reporting to me, any person using our information and case references. If someone wants to use the information, they must contact me directly. I will take action against those who steal intellectual information without permission. Thanks...Lon
**********

The agency inadvertently sold a bag that once housed the first sample of lunar material ever collected to an Illinois woman.

The bag was taken to the moon by the Apollo 11 spacecraft in July 1969 and contains, according to a government station, “lunar material embedded in its fabric.” Emblazoned with the words “Lunar Sample Return,” the bag was used by astronauts to take moon rocks back to Earth.

But as CollectSpace.com reports, the bag has had a checkered past since then. In 2003, it was found among the effects of Max Ary, the former president of the Kansas Cosmosphere, who was convicted of stealing and selling space artifacts from the museum. In 2005, Ary was indicted on charges of stealing over 400 space-related items on loan from NASA and other institutions. Hegeman explains that the bag was initially forfeited by Ary to pay for his restitution costs. But due to an error in NASA’s system, the bag was confused with another space bag from a later lunar landing, and was then accidentally sold to an Illinois woman for just $995 at auction.

Once NASA realized the mix up, the agency did not hand over the priceless bag. But Nancy Lee Carlson, who purchased it at auction, claims it is rightfully hers and filed a lawsuit. NASA responded with its own lawsuit against Ary in an attempt to regain the bag.

In a statement, the government told Hegeman that the bag is “a rare artifact, if not a national treasure.”

This isn’t the first time NASA has come across contentious, precious bags from lunar missions past. In 2015, Neil Armstrong’s widow, Carol Held Knight, found a white bag filled with space artifacts that flew with him to the moon inside a closet. The astronaut had apparently stowed them there before his death. That story had a happy ending—Knight donated them to the Smithsonian National Air and Space Museum, where they are being preserved for the public.

It may take a few lawsuits to get there, but perhaps NASA’s “whoops” moment can turn into a happy ending for the bag, which carries a small but priceless piece of space history.

Couple Killed by Lightning in Cemetery

Police were called around 3:30pm Wednesday to the Batavia Cemetery on Harvester Avenue, where two bodies had been discovered.

"The storm blew through probably 3:30 in the morning and they were found 3:30 in the afternoon," said City of Batavia Police Department Detective Sergeant Todd Crossett.

Investigators, with the help of the National Oceanic and Atmospheric Administration, determined the lightning strike had occurred in the area where the pair were found.

An autopsy determined the victims, identified as 34-year-old Richard Garlock and 32-year-old Jenea Macleod, had been struck by lightning as the victims had injuries consistent with a lightning strike.

Police say this is rare to see.

"This is the first time I have ever dealt with somebody struck by lightning," said City of Batavia Police Department Detective Eric Hill. "I know for the rest of the bureau, they haven't experienced it either."

Detective Hill adds there was drug paraphernalia in the scene but no indication it was used.

"This doesn't seem to be related to any overdose at all at this point," said Detective Hill. "We're not certain of that but we'll have more information when toxicology comes back."

A sudden and intense period of solar flare activity almost triggered a nuclear apocalypse back in 1967.

During the Cold War, the world narrowly avoided an all-out nuclear war on more than one occasion.

One such incident took place on May 23rd, 1967 when US military radar systems designed to detect incoming Soviet missiles suddenly started to experience widespread disruption.

Believing that this was a prelude to an all-out attack by the Soviet Union, US authorities took the decision to prepare their own planes, each brimming with nuclear missiles, for mass deployment.

Before any missiles could be launched however the order came in to stand down. It turned out that, far from being a sign of imminent attack, the radar disruption was actually the result of a solar storm.

"This is what we would characterize as a really near miss," said researcher Delores Knipp.

"The aircraft did not launch - we’re pretty certain of that. Was war imminent? What we know is that decisions were being made on the tens of minutes to hours basis, and that information got to the right place at the right time to prevent a disaster." Read more at Solar flares almost started a nuclear war

The decaying former Olympic sites across the world

4 Amazing Psychic Abilities You May Actually Have

Pow-Wows, or Long Lost Friend: A Collection of Mysterious and Invaluable Arts and Remedies, for Man as Well as Animals

Energy Essentials for Witches and Spellcasters