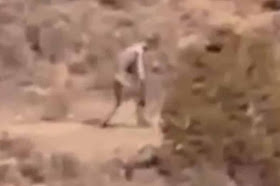 Filmed in Portugal the odd beast can be seen in this clip for a few seconds before disappearing behind a bush in the centre of the screen.

Some have said it could be a Chupacabra, a legendary Central and South American goat sucker with its first sightings in Puerto Rico.

While others have remarked on the eerie echoes of the footage with that of Big Foot. Read more w/ video at Strange creature caught on camera walking in the desert

A recent deep-sea expedition off the coast of California has revealed a rather unusual looking creature.

Discovered by the research vessel EV Nautilus, the peculiar purple cephalopod looks a bit like a cartoon character thanks to its large googly eyes which almost appear to be painted on.

A member of the Rossia pacifica (or stubby squid) species, the cute little creature was discovered around 900 meters under the sea by researchers using a remote-operated submersible vehicle.

Stubby squids can be typically found across the Northern Pacific and grow up to 11cm in length.

New data revealed by NASA has shown that global temperatures have been reaching record levels this year.

The new figures, which should put to bed once and for all the idea that man-made climate change is not a thing, have shown that July 2016 was actually the warmest month since records began.

"The scary thing is that we are moving into an era where it will be a surprise when each new month or year isn’t one of the hottest on record," said climate scientist Chris Field.

"It’s important for what it tells us about the future." - July was hottest month in recorded history 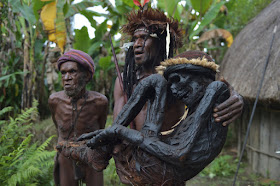 Tribal Leader Shows Off ‘Smoked’ Mummy He Sleeps With

How would you like to spend the night with the mummified remains of a long-dead relative?

What sounds like a scene from some schlocky horror flick is part of real life for a tribal leader in Wogi, a remote village in the Indonesian province of Papua.

Eli Mabel of the Dani tribe spends many nights in the hut where the mummy is kept to make sure nothing happens to it, he told Agence France-Presse.

In protecting the blackened mummy ― said to be the remains of an ancestor of his who ruled some 250 years ago ― Mabel aims to preserve the old Dani tradition of mummification, in which the bodies of venerated tribespeople were preserved with smoke after death.

“We must protect our culture, including the ceremonies for the mummy, the way we treat it, and maintain and fire for it,” Mabel told AFP.

The mummy is decorated with feathers, pig tusks and a traditional gourd covering for the penis. A fire is kept burning in the hut, which is known as a “honai.” Read more at Tribal Leader Shows Off ‘Smoked’ Mummy He Sleeps With


Politics and the Occult: The Left, the Right, and the Radically Unseen

World War Z: An Oral History of the Zombie War

Haunted Plantations of the South

The Ghost Excavation: An Ethnography of a Haunted Site