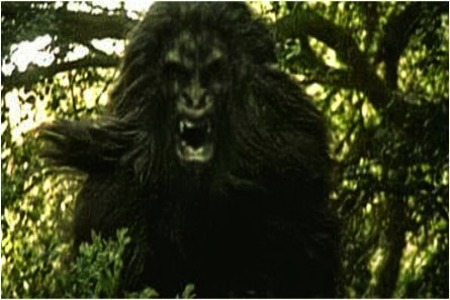 Phil in Montana called in to tell of his weird Bigfoot sighting:

“It was 1978 about 20 miles west of Denver. Me and a buddy of mine, I was 13 years old. What basically... what we done was we kind of snuck out of the house at night, you know. This was on Lookout Mountain Road, and we come out around the corner and there's a recreation area on the right side. They have company picnics in there, baseball diamond, picnic tables etc. And there was this thing was standing on the pitcher's mound, beating a dead dog with a stick. About 9 feet tall. It wasn't human. I could tell that right away. And right across the street is the Jefferson County Nature Center and there's a big stone gate and we, just about a hundred yards and there's a 60 mile per hour Chinook wind blowing. We get behind the gate and we're watching this and its got the dog by the tail and it's beating this dog on the head. It had the dog in its left hand and the stick in the right. Holding it out, you know. And my friend's name was Jody and I turned to him and I whispered. I forget what I whispered. I think I said, you know, can you believe this? Or whatever. This thing turned it head towards us and we're talking a hundred yards. Heavy wind. We were downwind from it. It took off running... covered two hundred yards in I'd say, four seconds.”

The terminally ill man who is set to become the world's first head transplant recipient says more details about his extraordinary surgery will be revealed next month.

Valery Spiridonov, a computer scientist from Russia, is set to undergo the risky procedure next year.

Today, the 31-year-old is wheelchair reliant due to a muscle-wasting disease, announced his neurosurgeon would explain how the plan was progressing in September.

Mr Spiridonov says he is ready to put his trust in controversial surgeon Dr Sergio Canavero who claims he can cut off his head and attach it to a healthy body.

Neither the exact date or location have been chosen yet, but the world first procedure is aimed to take place in December 2017. Read more at Patient set to undergo the world's first human head transplant 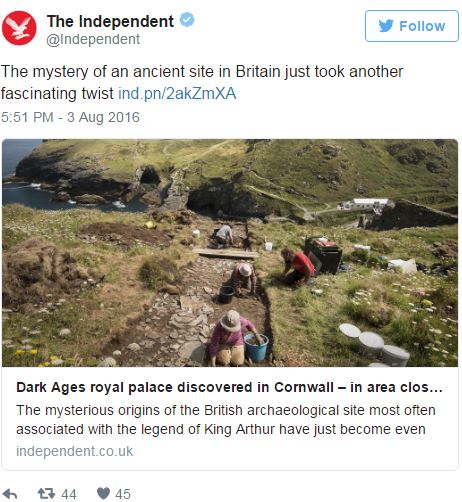 The remains of an impressive sixth-century palace have been unearthed at Tintagel in Cornwall, England.

Situated within the area in which the legendary King Arthur was reputed to have been born, the meter-thick walls of this ancient structure were revealed during recent excavations of the site by archaeologists from the Cornwall Archaeological Unit.

More than 150 fragments of expensive pottery and fine glass were also found there - items that were most likely imported from exotic destinations by the palace's wealthy inhabitants.

One of these - an item of Phocaean red-slip ware - came all the way from Turkey and would have been used to share food among guests during feasting.

"This is the most significant archaeological project at Tintagel since the 1990s," said English Heritage properties curator Win Scutt. "The three-week dig is the first step in a five year research programme to answer some key questions about Tintagel and Cornwall’s past."

"The discovery of high-status buildings – potentially a royal palace complex – at Tintagel is transforming our understanding of the site."

Vanished into Thin Air at the Great Smoky Mountains

Proof Of Time Travel? Famous Faces Appear ‘Back In History’

These are the 20 best places to search for alien life, say astronomers

Signs That Show You Have Met Someone From Past Life

Bloodline of the Gods: Unravel the Mystery in the Human Blood Type to Reveal the Aliens Among Us