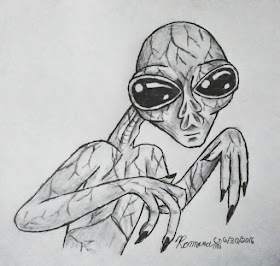 I Dream of Aliens

Ventura, CA - 2015-03-12 - 8:00PM: I was having a normal dream when it was interrupted by a vivid dream of me on a table surrounded by aliens. There were two types. one kind that was small looked almost identical to the alien on the cover of the book communion. The other was very tall praying mantis type. The mantis type had almost clear skin with black veins that made them greyish looking. I didn't want to look right at them because I was afraid but I glanced at them often so I could remember later. I wasn't horribly scared and not sure what was being done there fingers moved to fast I couldn't keep up. I felt no pain. there was a blank space then I woke up. I drew a pic of them when I woke up. I am not sure if this was real but I have seen ufos in the past and dreamed of these aliens before. I have a lot of other weird stories but I really don't want to talk about them unless I have too. I am reporting this only in case someone else has seen these aliens. I will include a drawing I did. - MUFON CMS

Spanish police have arrested an American woman for issuing death threats against the astrophysicist Stephen Hawking at a science event on the island of Tenerife.

The 37-year-old suspect was detained in the municipality of Arona, on the most populous of the Canary Islands, on Wednesday – the same day that Hawking delivered his first lecture at the Starmus International Festival.

The woman, who has no prior record and had traveled to Tenerife by herself, could be facing a six-month prison sentence and immediate deportation for harassment and issuing serious threats against the famous scientist, legal sources told the Efe news agency.

The same sources said that one of the cosmologist’s children alerted authorities after detecting over 100 threatening messages on Twitter and in e-mails on Tuesday. The messages contained sentences such as “I am going to kill him.”

In her statement to the police, the woman apparently said that she loves Hawking and would never harm him.

Police investigators who searched her hotel room found a collection of esoteric items linked to religious extremism and contrary to Hawking’s theories denying the existence of God. They also found notes and documents detailing the scientist’s residence and workplace, and notebooks outlining precise plans on how to approach her target.

According to news agency Europa Press, the woman, who currently resides in Norway, has been following Hawking across the globe and may suffer from psychiatric problems.

Hawking’s Wednesday address had attracted long lines of people at the science and arts festival. The astrophysicist arrived on stage flanked by two members of the Spanish National Police, an unusual sight that caused some alarm among members of the audience. Outside the venue, other officers checked visitors’ bags.

That same day, the police arrested the alleged stalker at a hotel located very near the festival venue, the Pirámide de Arona, which contains one of the biggest auditoriums in Europe.

The woman had apparently been issuing threats against Hawking for years, but the situation got out of hand in recent days, when the threats proliferated over e-mail an in the social media.

“I am going to kill you.” read one of the messages. “I am right next to you and I can kill you,” said another.

The e-mails included specific plans to end the scientist’s life, the police said.

Sources close to Hawking told this newspaper that the scientist felt safe at all times, and played down the incident. - US woman held in Tenerife for death threats against Stephen Hawking

The father of the 2-year-old boy who was killed in an alligator attack near Disney's Grand Floridian Resort & Spa told officials a second gator was involved, records show.

Wellons said he was examining Matt Graves' injuries early on the morning of June 15 and told him he needed stitches and antibiotics since he had lacerations from the gator's teeth.

Wellons said Graves "refused to leave" the area, but he was finally able to persuade him and told him he could come back after getting medical treatment, an email shows. Read more at Records: Father of toddler attacked at Disney by alligator said two gators involved

There were cheers of jubilation from the team at NASA's Jet Propulsion Laboratory this morning as the news came in that the probe had survived its complex orbital insertion manoeuvre.

During its time in orbit around the gas giant the $1.1 billion spacecraft will aim to unravel many of Jupiter's secrets including what lies deep beneath its swirling atmosphere, how the planet came to form and what processes are responsible for generating its complex weather systems.

"What Juno’s about is looking beneath that surface," said principal investigator Scott Bolton.

"We’ve got to go down and look at what’s inside, see how it’s built, how deep these features go, learn about its real secrets."

The probe's instruments include a microwave radiometer, a magnetometer, an infrared auroral mapper and a high-resolution color camera that will take detailed shots of Jupiter's polar regions.

Over the course of 37 orbits lasting 14 days each, Juno will get within 2,600 miles of the gas giant's swirling clouds as it peers down through the atmosphere in the hope of confirming whether or not the planet actually has a solid core at its center.

"The primary goal is to understand the recipe for how you make a solar system," said Bolton. "What we can tell from our instruments can help us learn how planets formed in the first place." Read more at 'Welcome to Jupiter': Nasa mission puts Juno in orbit after five-year journey

The Man Who Thought He was a Cat

As a psychiatrist, I diagnose mental illness. Also, I help spot demonic possession