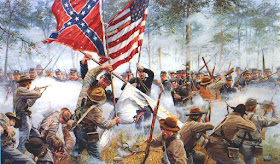 From the blog of the Gettysburg National Military Park:

The packages seem totally innocuous. Not very large. Slightly heavier than you might expect for their size. Addressed to Gettysburg National Military Park, but not to a specific department or person. Often without a return address. Not terribly unusual at all.

Except for the curse.

The boxes in question hold rocks. Rocks that were previously removed from the park, and are now being returned. In almost every case, they also contain a letter, such as the one below, received in May of this year: 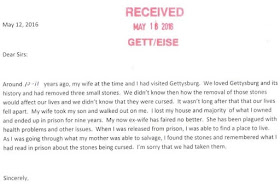 It is important to remember that removing rocks from the park is a violation of Chapter 36 of the Code of Federal Regulations. Section 2.1(a)(1)(iv) prohibits “Possessing, destroying, injuring, defacing, removing, digging or disturbing from its natural state a mineral resource or cave formation or the parts thereof.” If these individuals had been caught in the act, they would have been cited and fined $100, plus a $30 processing fee. All in all, they may have preferred that.

NOTE:I have heard these stories for my entire life. Living close to the battlefield, you are privy to many odd tales connected to the area. Lon

A mystery philanthropist known only as 'Benny' has been hiding $100 bills around town for people to find.

The unidentified individual, whose true identity is known only by a circle of his closest friends, has been leaving $100 bills around Salem on a regular basis for the better part of three years.

His notes have been discovered in shops and neighborhoods by dozens of unsuspecting members of the public who have since come to refer to him as 'Benny' because Benjamin Franklin's image is printed on them - a nickname that has also spawned the terms 'Benny-ficiaries' and 'Benny-fitting'.

Many of the notes have been picked up by people who have had a particular need of the money to pay household bills and over half of the recipients have also forwarded $100 to someone else.

Some have even used the cash to buy school supplies or to help out local charities.

As for Benny himself - his identity still remains a mystery, but within those he has touched with his anonymous generosity there now lies a renewed sense of community spirit.

Perhaps his is a philosophy that we can all learn something from.

Lebanon, OR - 2016-07-10: Something traversed between my wife and I about 4 feet off the ground that made an unidentifiable noise and the speed of which was extraordinarily fast. Neither of us place any credence in "Aliens among us" or visitations...The physics against such things are irrefutable. My career was in astronomy on top of Mauna Kea in Hawaii, my wife was a banker and accountant...

What ever it was created a distortion in the air between us for an instant. We live in a suburban area and our residence is surrounded by a Fir forest. To the right of me from whence "it" came is a 150 meter tall hill about 50 meters away which we also own..Aside from the noise of the event there was absolutely no report one might ascribe to the discharge of a fire arm...our area is for the most part dead quiet.

If it were a bullet etc. "it" would have to be able to climb a 150 meter tall hill, go over the top then descend to our level and go absolutely parallel to the ground between us. I have been reluctant to "report" this because of my own core beliefs, however one of my friends encouraged me to do so anyway..

I have a home observatory (a Meade 12 inch LX200) and do a lot of observing hunting for NEOs...I have yet to see anything inexplainable either here or on top of Mauna Kea...Having said that, the event my wife and I witnessed not only frightened us but left us with profound curiosity as to its origin...

The distortion in the air between us looked as if we were looking through water...The noise was subtle but unlike anything we have ever heard.. I own guns and know a ricochet when I hear one...Am I alone in this??? - MUFON CMS

Sasquatch: Out of the Shadows

This Pastor Has Convinced Us: Pokemon Are Actually Cyber-Demons


UNDERGROUND BASES & TUNNELS: What is the Government Trying to Hide?