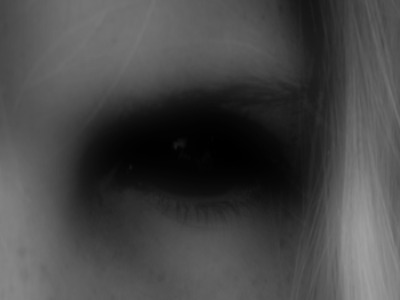 My younger brother was in his room carrying out a conversation which was weird because as we were alone at home. I went to see who he was talking to. There was no one there, so I asked him who he was talking to. He said the little girl with the black eyes. I asked where she was and he said that she had left. I thought he just lying.

About a week later we started hearing voices and footsteps. I would be sleeping with my blankets covering me and I would wake up with them folded at the bottom of my bed. My sister got scared one night and crawled into bed with me. As she was getting into my bed I woke up, so I turned on my TV. I also turned on my light to find the remote. I left the light on along with the TV. Right when we were both drifting off to sleep, my door slammed shut, which is almost impossible as I always have a basket full of books in front of the door so that it doesn’t close. The light then shut off, and my TV picture went off with static noise.

I got up and went to the door. I tried to open it but it was like someone was holding the door handle from the outside.

My sister and I started to scream, when my mom came and opened the door. As she did the light turned back on and the TV picture came back.

We had a priest bless the house, but the activity continues. The house was built in 2003 and no one has died there. We need help. HN

NOTE: This family recently moved out of the house. Lon

Dozens of half-dead people blindly staggered through the streets of a Brooklyn neighborhood known as “Zombieland” Tuesday morning, propping themselves up against fire hydrants and vomiting foam down their shirts.

But the apocalyptic scene wasn’t for a movie. The victims had apparently smoked a bad batch of the “synthetic marijuana” drug known as K2 — and 33 people had to be hospitalized.

“It looked like a scene out of ‘The Walking Dead,’ ” said Brian Arthur, a lifelong Brooklyn resident who posted footage of the disheartening scene on Facebook.

“These guys were wandering around, stumbling all over the place, and were completely out of it,” he told The Post. “They didn’t know their whereabouts, and some couldn’t even get up off the floor. One guy was even trying to hold himself up with a Johnny pump [fire hydrant]. It was ridiculous.” Read more at 33 people hospitalized after K2 overdoses

Where are the Brown Mountain Lights?

It is remembered for its deadly fury, but the Flood of 1916 – one of the state’s greatest calamities – also played an odd role in the mystery of the Brown Mountain Lights.

A U.S. Geological Survey reported in 1913 that the lights were a combination of auto and locomotive headlights and other optical phenomenon activated by peculiar air currents.

Lee Hawkins, a observatory engineer at Appalachian State University, looks at an image of Table Rock Mountain on his computer while testing a web cam at Wiseman’s View Overlook, near Linville in 2005. Hawkins was part a group that are investigating the Brown Mountain Lights.

Then remnants of two Category 4 hurricanes – one from the Atlantic, another from the Gulf – hit the Blue Ridge in succession a century ago this month, unleashing the biggest flood in historic times along the Catawba Basin.

When it was over, more than 50 people were dead, bridges were ripped from their pilings and modern conveniences like electricity, telegraph, roadways and railroads had to be rebuilt.

But the Brown Mountain Lights kept chugging along. People in the mountains continued to report periodic sightings of the phenomenon in the vast de-electrification caused by the flood. Read more at Where Did Mysterious Mountain Lights Go? 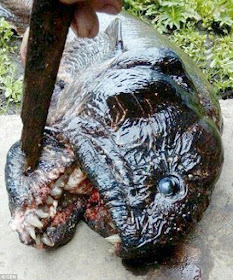 Fishermen were left reeling when they caught this bizarre mutant-looking black fish with a frightening face, sharp teeth and the body of an eel.

It was caught in the Kama River in central Russia's Udmurt Republic by fishermen using earth worms.

There is still confusion over what the creature is, with the fishermen themselves saying it's a mutated freshwater fish while others claim it's a piranha.

An emergency meeting was called on Monday after reports that students eyes were rolling into the back of their heads as their bodies spasmed uncontrollably.

Despite an ongoing investigation, parents believe the chilling incidents at Jean Lafosse College in the French Indian Ocean Island of Reunion were caused by "spirits", local media reported.

And a disturbing video of an Imam "cleansing" one of the girls emerged on the web.

“The limbs stiffen, they scream, yell”

A mum standing at the school gates told French magazine L'Independent: "We often see spirits come on people but it’s always in specific locations – in a temple for example, but not outside.

Another added that her daughter was "afraid to go to school in the morning".

There have been 25 cases reported in the college – mostly affecting girls, headmaster Gervias Fontaine said. - Horror as parents told by headmaster their kids were 'possessed by demons'

Physicists Simulate Sending Particles of Light Into the Past, Strengthening the Case that Time Travel Is Possible


Dr. Mary's Monkey: How the Unsolved Murder of a Doctor, a Secret Laboratory in New Orleans and Cancer-Causing Monkey Viruses Are Linked to Lee Harvey ... Assassination and Emerging Global Epidemics

The Rise of the Fourth Reich: The Secret Societies That Threaten to Take Over America

The Plot to Kill King: The Truth Behind the Assassination of Martin Luther King Jr.