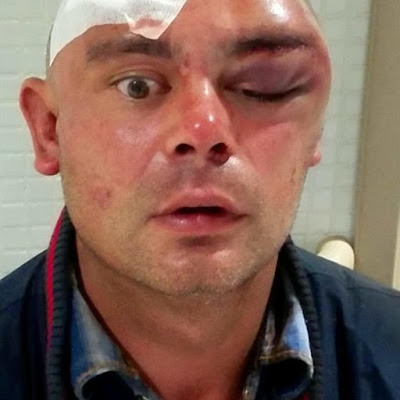 A British DJ says a growling cannibal ambushed him near his Spanish apartment and gnawed on his face for 20 horrifying minutes.

Kenny McSween was so badly bitten that he needed seven stitches after the attack, which was caught on surveillance camera, the Mirror reported.

“I honestly thought he was going to kill me. I feel like I've gone 12 rounds with Mike Tyson,” the 38-year-old DJ said. “The sound of him biting me still haunts me — he was growling like a wild animal.”

The chomping attacker was not charged with any crime, McSween claimed.

The British-born jock said the chewing scuffle went down in the lobby of his apartment complex on the Spanish island of Ibiza. McSween was walking through the reception area about 7 a.m. on Sept. 20 when the man — who pretended to be a cop — approached him and asked if he lived in the building.

The police imposter shoved him against a wall, and McSween scampered away. But the DJ returned a few minutes later to figure out why the man jostled him.

That’s when then man started savagely attacking McSween. A surveillance camera from inside the lobby caught the fierce fight: The man wrestled the jockey to the ground, violently punched him and started biting his forehead.

The footage showed a woman, who may have been associated with the attacker, walk into the lobby and start collecting McSween’s belongings, which had fallen out of his pockets during the struggle.

When cops finally showed up 20 minutes into the ambush, the officers handcuffed McSween — not the cannibal-like attacker, he claimed. The man went free without any charges, he said.

The cops eventually took the bloody, bruised McSween to a hospital. The gash on his head needed seven stitches, he said.

“My face swelled up like a balloon and I was dripping with blood from where he bit me,” he said.

Cops told McSween the man may have attacked because he didn’t believe the DJ lived in the apartment complex — but officers provided no other details about the investigation and have not made any arrests.

Fearing his on-the-lam assailant, McSween gave up his apartment in Ibiza, where he has lived for the past two years, and moved back home.

“It's got so bad that I've had to return to the UK because I genuinely feared for my life,” McSween said. -
British DJ beaten, bitten in cannibal-like attack: 'He was growling like a wild animal'

NOTE: Many jurisdictions in Spain have a longtime problem with corruption. I have talked to several British nationals living in Spain who claim that in recent years they have been targeted by citizens and officials since the country's economic troubles have escalated. The fact that this assailant was not arrested is unbelievable...Lon

An Intellectual History of Cannibalism

Mummies, Cannibals and Vampires: The History of Corpse Medicine from the Renaissance to the Victorians

The Other White Meat: A History of Cannibalism

15% Off - All U.S. Veterans & Active Military / Spouses.
Use coupon code A1028 during purchase - unlimited use.
Thank you for your service & sacrifice!