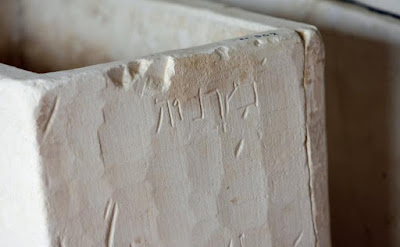 'The Lost Tomb of Jesus'

Proponents of the theory that Jesus married Mary Magdalene and had children with her scored a victory this week after an Israeli court cleared fraud charges against a documentary that claimed to have found evidence of the marriage inside what it called Jesus’ “lost tomb.” The court’s decision, which awarded one of Israel’s largest defamation settlements in recent years, is likely to revive long-standing archaeological debates about Jesus' earthly remains.

The court case derived from claims made in a 2007 Discovery Channel documentary by Israeli filmmaker Simcha Jacobovici called “The Lost Tomb of Jesus.” The film based its argument about Jesus’ burial and marriage on a 1980 archaeological discovery in the Talpiot area of Jerusalem, where an ancient tomb was found bearing Jesus’ name along with other well-known biblical names like Mary, Matthew, Joseph and Judas.

Most mainstream Christians believe Jesus was unmarried and did not have children. However, Jacobovici argued that the 1980 findings were evidence that not only was Jesus buried but that he had also been married to Mary Magdalene and had children with her -- all of whom, he said, were buried at the Talpiot site.

With high-profile backers like filmmaker James Cameron, the documentary generated international attention and debate. “If true, the idea that Jesus was buried on Earth would undermine one of the central tenets of Christianity,” James Tabor, a historian at the University of North Carolina at Charlotte who has previously collaborated with Jacobovici, said in an interview with Live Science.

Christianity has traditionally held that Jesus rose bodily from the dead after his crucifixion to ascend to heaven and to return to walk on Earth. "If you find the bones of Jesus, the resurrection is off," Tabor said, arguing that conservative Christians see the Talpiot findings “as an attack on Christianity and also a refutation of the faith of Christianity."

However, many skeptics have said theological questions around the findings are not their chief concern. They argue the real issue is that scientific and historical standards have been disregarded by proponents of the theory. Some historians have pointed out that the names on the boxes inside the Talpiot tomb don't precisely correspond with those of Jesus' family. Other experts have noted that the current archaeological research on the subject has yet to be published in a peer-reviewed journal.

Among the most prominent of Jacobovici’s detractors has been former Israeli antiquities official Joe Zias, who embarked on a campaign to discredit the filmmaker, accusing him of forgery and “planting archaeology.” Jacobovici eventually filed a libel suit against Zias, alleging that he had defamed him with a wide array of false accusations lodged to his broadcaster and his publisher, among others, the Jerusalem Post reported.

“I don’t mind being criticized,” Jacobovici told the Times of Israel in an interview. “People should be free to say what they want. But there’s a difference between free speech and libel. And when you make these kinds of allegations, you cross the line.”

In a decision announced Monday, an Israeli district court ruled in Jacobovici’s favor, awarding him a nearly unprecedented $208,000 in damages for defamation and providing him with an important victory in countering claims against him. But while the court may have cleared Jacobovici of fraud, its ruling avoided taking a stance on his theory, leaving the question of the legitimacy of his conclusions to academics and theological experts. - Lost Tomb Of Jesus? Biblical Documentary Alleging Jesus' Marriage To Mary Magdalene, Jerusalem Burial, Cleared Of Fraud By Israeli Court

Last Friday, Pat Venditte, 29, made his Major League debut for Oakland Athletics against the Boston Red Sox, becoming the first MLB player in 20 years to pitch with both his left and right arms.

The East Oregonian newspaper, based in Pendleton, Oregon, celebrated Venditte's ambidexterity with this headline. 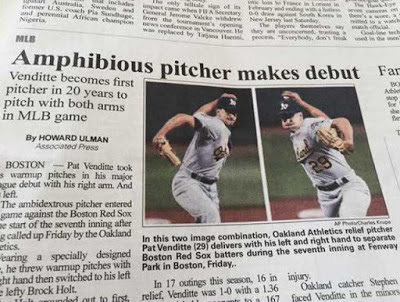 Saudi education authorities bowed to public pressure and moved girls from a local school to another building, following reports that it was haunted.

A committee formed by the education department in the Western town of Medinah decided to move the school girls after examining the building and some students who have been taken to hospital with fits of fear and convulsions.

“We have decided to move the girls to another school, taking into consideration the circumstances at the old school and after listening to statements by the teachers and families,” ‘Ajel’ daily said, quoting education department director Naser Abdul Karim.

In a report last month, the Arabic language daily ‘Al Watan’ quoted students’ parents as saying they believe the school was haunted by jinn (spirits) after their daughters suffered from fits of fears and convulsions.

The families also called on education authorities to send Islamic scholars to the school in Shalayel village near Medinah to reassure its students and work for “exorcising jinn and ghosts haunting the building”.

Ajel quoted a school girl as saying she saw an old man sitting alone in a corner outside the school building and vanished just as she walked towards him.

“The school watchman also said he went into one class to clean it in the evening when he saw children playing football. When he came near them, they just disappeared.” -

KRISHNAGIRI: A cleansing ritual to ward off evil spirits from a house or a person is common. But what is not so common is an entire village leaving their houses, with all their possessions and cattle, from dawn to dusk, to get rid off the ‘evil spirit’ they believe is haunting their village.

In this ritualistic exodus, nearly 200 families of Ammanari village, Krishnagiri, left the village early in the morning on Sunday and returned only in the evening after doing special pujas.

Apparently, the death of three youngsters in the village, within a month, caused the villagers to believe that an evil spirit was roaming their village.

When Express visited Ammaneri, which comes under Kooliyam panchayat, there was not a single soul in the village. When a resident of Ombalakattu, a nearby village, was asked about the ritualistic exodus, she said Ammaneri residents vacated the village in the morning, with their belongings and cattle and returned only in the evening.

“It is believed that this ritual will take away all their worries and ward off evil spirits from the village. People in the surrounding villages of Savulur, Sembadamuthur, Ammaneri, Ombalakattu also perform the ritual at times of crisis like this. It was performed in our village about three years ago,” said Sala (30).

Upon reaching the village entrance, Express team found that the road was blocked with an old tree smeared with ashes to ‘prevent the evil spirit from entering the village.’

Besides, 15 men from nearby villages were deputed to guard the village border, each carrying a long stick. The ‘guards’ warned that no one could enter the village till evening.

Express met Ammaneri residents a few km away from their village.

Mari (60) told Express that she has seen the ritual about four times, done once in 10 years. - New Indian Express

Freaks: ‘A fleeting glimpse of the Old Weird America’

Written communication may be 40,000 years old

Has the Loch Ness Monster just hitched a lift home on a UFO?