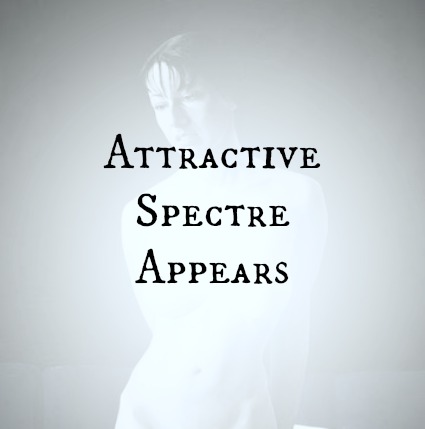 I received the following email in February 2012:

Hello - this past weekend I was in Washington D.C. for business reasons. My reservation was made at the Omni Shoreham Hotel in Northwest D.C. - I have stayed at this hotel on several other occasions.

I actually grew up in suburban Maryland (now live in NYC) but not familiar with any haunted history of the hotel. I am used to paranormal activity - my townhouse is haunted by the spirit of a former stage actress according to a medium friend. Our situation is benign - though we do hear singing late at night.

I checked in on Friday (2/17) and went directly to my room on the 8th floor - #866 - a very nice medium suite. It was 3:30 pm - I had decided to drive since I needed to stop at a client's location before proceeding to D.C., so I was arriving later than I had hoped. There were a few errands I needed to take care of before I met a client for drinks. After the meeting I decided to hit the sack early (about 10 pm) since I had a busy agenda planned for Saturday.

I actually fell asleep not long after I got into bed. Everything was fine until I was woke by a constant 'groaning' sound. I sat up and looked at the clock - it was 2:25 am. The sound seemed to come from the room next door - I just assumed there was a sexual encounter going on. The sound continued for about 10 minutes - then gradually stopped. I fell asleep - but just for a few minutes. Suddenly there was an horrific female scream that sounded like it came from under my bed! I freaked - I was frozen and afraid to get out of bed. I was worried that someone else in the hotel heard the scream and that the police would break down my door any second!

Nothing happened - no more screams and no more moaning. Then as I lay in bed shaking like a scared child I noticed a bright white form slowly rise on my right - from the floor by my bed until it stood full body. This spectre was only a few feet from me - I honestly thought I was going to faint.

The figure was draped in bright white light and had the facial and body features of a young woman - completely nude beneath the light. She was staring into my eyes and slightly smiling. I will admit that she was quite attractive - she would have been a '10' in my book. After several seconds she turned around and started to move toward the wall at my right. The form dissipated before reaching the wall. By this time I was more shocked than scared - I didn't fall asleep the rest of the night.

Saturday was an unproductive day - I was still shook from the sighting plus I didn't get much sleep. I went back to the hotel late afternoon and checked out - even though I had the room for the night there is no way I staying another night. Raymond O.

NOTE: Was Raymond 'turned on' by the ghost? Odd encounter...Lon 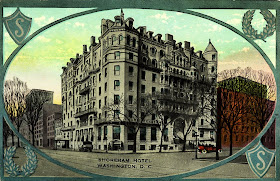 I found the following information about the history of the Omni Shoreham Hotel:

The Omni Shoreham is a true Washington D.C. institution, that has hosted inaugural balls for every United States President from FDR to Bill Clinton. Shoreham opened in 1930 and has become a historic Washington D.C. Landmark that has been central to the most influential city in the world. The Omni Shoreham is reportedly haunted by the ghosts of the adopted daughter of an investor and of a housekeeper. The hotel has named the suite where the haunting takes place the Ghost Suite.

The Omni Shoreham was built in.1930. The owner of the hotel, Harry Bralove, needed financial backing, which he received from Henry Doherty. Doherty became a minority shareholder and took a suite of rooms in the hotel. Mr. and Mrs Doherty lived in their suite of rooms until 1973. Occupying the suite along with the couple was their adopted daughter, Helen and the Executive Housekeeper of the hotel, Juliette Brown. Juliette Brown looked after the family.

Juliette awoke early one morning feeling ill. She reached for the telephone, but died before completing the call. Some time afterward, Helen Doherty also died mysteriously in the suite. The causes of these mysterious deaths were never disclosed. Rumors of suicide and drug overdose were alleged.

The Dohertys vacated the premises and strange occurances started. Televisions and lights were turned on spontaneously at 4 am. Although the suite was unoccupied, guests in the adjacent room reported hearing loud noises in the suite. The suite has been redesigned, restored and renamed the Ghost Suite. 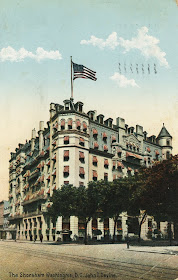 History of the Omni Shoreham Hotel in Washington D.C.

The Shoreham Hotel was the vision of Harry Bralove, an ambitious man who earned a degree from Georgetown Law School while working for the United States Navy. After he left the Navy, he started a construction company building apartment homes.

While walking the property along Rock Creek Park, he envisioned a grand hotel. Architect Joseph Abel brought the vision to life with the eight story hotel featuring Art Deco decor. The building had running ice water, an indoor ice rink in the lounge and high-speed Westbrook elevators. In the basement, a furniture factory manufactured quality custom built furnishings for the hotel public areas and guest rooms.

When the hotel opened a single room was $5, a double room was $8 and parlors and suites were $12.

Since the 1930's , the Shoreham has been a favorite destination of world travelers, dignitaries and presidents. The grand opening of the stately hotel was celebrated with a splash, when famous singer Rudy Vallee flew in on a tri-motors Amelia Earhart airplane.

During World War II, the hotel got around rationing of alcohol by purchasing the entire stock of a Scottish distillery.The hotel was home to the legendary Blue Room, which was the swankiest nightclub of its time. The Blue Room was a favorite gathering spot for John and Jacqueline Kennedy. Prominent politicians have called the Shoreham their home while staying in the nation's capital. Famous guests have includes President Ronald Reagan, President George Bust, Sr., Prime Minister Margaret Thatcher, West German Chancellor Helmet Kohl, Senator Ted Kennedy, Eva Gabor and actress Helen Hayes.

The landmark hotel is a member of the National Trust Historic Hotels of America and Resorts and Great Hotels of the World. The hotel has been awarded the AAA Four Diamond rating. - voices.yahoo

"Ghosts: Washington Revisited" (The Ghostlore of the Nation's Capital)