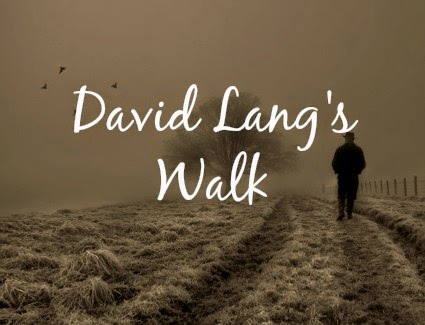 David Lang was a farmer who lived near Gallatin, Tennessee. On September 23, 1880 he supposedly vanished into thin air while walking through a field near his home. His wife watched him from the porch of his house while his two children played in the front yard. A lawyer by the name of "Judge" August Peck accompanied by his brother-in-law were driving up to the farm in their buggy when Mrs. Lang suddenly started hysterically screaming.

Frank Edwards included the following description of Lang's disappearance in his book Stranger Than Science: a Fantastic Yet Factual Collection of Fascinating Stories Taken from Life

David Lang had not taken more than half a dozen steps when he disappeared in full view of all those present. Mrs. Lang screamed. The children, too startled to realize what had happened, stood mutely. Instinctively, they all ran toward the spot where Lang had last been seen a few seconds before. Judge Peck and his companion, the Judge's brother-in-law, scrambled out of their buggy and raced across the field. The five of them arrived on the spot of Lang's disappearance almost simultaneously. There was not a tree, not a bush, not a hole to mar the surface. And not a single clue to indicate what had happened to David Lang.

The grownups searched the field around and around, and found nothing. Mrs. Lang became hysterical and had to be led screaming into the house. Meanwhile, neighbors had been altered by the frantic ringing of a huge bell that stood in the side yard, and they spread the alarm. By nightfall scores of people were on the scene, many of them with lanterns. They searched every foot of the field in which Lang had last been seen a few hours before. They stamped their feet on the dry hard sod in hope of detecting some hole into which he might have fallen -- but they found none.

David Lang was gone. He had vanished in full view of his wife, his two children, and the two men in the buggy. One second he was there, walking across the sunlit field, the next instant he was gone.

Eventually the grass around where Lang had disappeared turned yellow in a fifteen-foot diameter circle, suggesting that some form of energy had mysteriously transported him away.

Seven months later his children were said to have heard their father's voice faintly calling out for help as they played near the spot of his disappearance, but eventually the sound of his voice faded away. They never heard his voice again.

The story of Lang's disappearance attracted the attention of researchers during the second half of the twentieth century, after versions of the tale were published by Edwards in Stranger Than Science

Both Wilkins and Edwards claimed the story was a true, unexplained mystery.

Numerous researchers subsequently tried to track down evidence that would confirm the story's authenticity, but nothing has ever been found. One of the search accounts follows:

"A German or Austrian savant, Dr. Hern, discussed 'void places' in space into which people can fall "and be seen and heard no more." Mrs. Lang pined away into invalidism, always expecting David's return. One evening next Spring, Lang's children saw a circle of stunted grass 15 feet in diameter at the spot where he had disappeared. Sarah Emma, who was 11 years old, called out to her father, and, to their astonishment, the children heard his voice calling faintly for help, eventually fading away. Mrs. Lang also went to the spot a few times in the next few days, called out to him, and heard his faint reply--which finally faded forever. The elderly Sarah Emma Lang described her father's disappearance in a notarized affidavit."

No nineteenth-century newspaper accounts of Lang's disappearance have ever been located. As well, no census records indicate that such a man ever lived.

During the 1970s, researchers who contacted a Tennessee librarian named Hershal Payne unearthed a possible source for the tale. Payne said that he had heard some people attribute the tale to a well-known hoaxer who lived in Tennessee during the 1880s, Joseph Mulhattan. Supposedly Mulhattan invented the tale while participating in a lying contest, and with time the story became part of local legend. But despite this rumor, there is no evidence that Mulhattan was the source of the tale.

In July 1953 mystery-novel writer Stuart Palmer published the earliest known account of the Lang story in FATE Magazine. Palmer's article was the likely source that both Wilkins and Edwards later relied upon.

Palmer recalls an interview with David Lang's daughter Sarah Lang, that took place in 1931, following the death of her mother Emma. In the article, Sarah claimed to have received a handwritten message from her deceased father by way of 'automatic writing'. The message said "Together Now. Together now and forever...after many years...God Bless You." But in reality, Palmer probably lifted the idea for the tale from a short story by Ambrose Bierce, "The Difficulty of Crossing a Field," which Bierce included in his story collection Can Such Things Be?

(1893). Bierce's story describes a plantation owner who vanishes into thin air. In his 1953 article, Palmer claimed that Bierce's story was inspired by the Lang incident.

Is it possible that Lang could have slipped into another dimension, or as some people think, possibly abducted by alien beings? Alternatively, the whole story could be complete fiction. If so, it wouldn't be the first time. But here is a caveat; if the story is simply a hoax it should have been fully debunked by now. 1880 was a long time ago and one thing is certain; they did have newspapers back then. Why hasn't anyone in all these years confirmed one way or the other the truth of this story. In this modern day, literally thousands of people disappear worldwide each and every day. A vast number of the lost are never seen again. Was the Lang incident just another case of a true missing person whose story eventually progressed into legendary status?

SOURCES:
castleofspirits.com
Stranger Than Science: a Fantastic Yet Factual Collection of Fascinating Stories Taken from Life

google.com/alt.folklore.ghost-stories
A Slice Of Tennessee