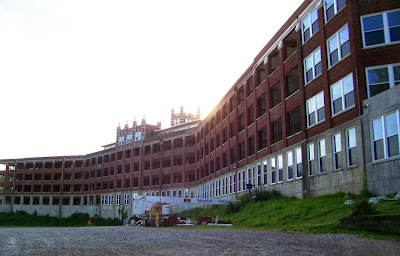 The infamous sanatorium is set to become a four-star hotel where people can stay and look for ghosts.

Originally opened in 1910 as a small two-storey building for housing tuberculosis patients, Waverly Hills was expanded significantly after an epidemic ravaged the population.

Between 1924 and 1961 more than 6,000 people lost their lives while battling the condition within the sanatorium's walls and many of them found themselves being unceremoniously dumped down the infamous 485-foot "death chute" that was used to help the hospital staff dispose of the bodies of the deceased.

In 1962 the building was turned in to a nursing home for the elderly but ended up being closed after two decades following reports of patient neglect. In 1983 there were plans to turn the sanatorium in to a prison however the idea fell through due to complaints from neighboring properties.

Since falling in to disrepair however the eerie building has proven to be a popular destination for paranormal groups and investigators with reality TV shows such as Ghost Hunters and Ghost Adventures having conducted their own investigations within its walls.

Its newfound popularity has even prompted plans to turn the building in to a grand four-star hotel complete with a restaurant, conference center and museum.

The sanatorium's paranormal reputation will not be forgotten as it will be marketed as a 'haunted hotel' where guests will have the opportunity to encounter something otherworldly.

Whether people will actually be willing to sleep there however remains to be seen. Read more at Waverly Hills to become haunted hotel

The retired officer, known only as Captain Kaye, also claims to have served in a secret 'space fleet' run by a multinational organisation called the Earth Defense Force.

A former US Marine has claimed he spent 17 years of his career on MARS.

The ex-naval infantryman, who uses the pseudonym Captain Kaye, says he was posted to the Red Planet to protect five human colonies from indigenous Martian life forms.

He claims he then spent nearly three years serving in a secret 'space fleet' run by a multinational organisation called the Earth Defense Force, which recruits military personnel from countries including the US, Russia and China.

He added that training took place on a secret moon base called Lunar Operations Command, Saturn’s moon Titan, and in deep space.

Captain Kaye says he retired after a 20 year tour of duty, describing a retirement ceremony on the moon that he claims was presided over by VIPs including ex-Defense Secretary Donald Rumsfeld. - Retired US Marine claims he spent 17 years on MARS protecting five human colonies from Martians

PURMEREND, Netherlands, March 14 (UPI) -- An eagle-owl that has reigned terror over a small Dutch town for more than a year has been captured and will be relocated.

Dubbed the "terror owl" by locals, the bird of prey has been swooping down on unsuspecting residents and gouging flesh. At least 50 people have been injured, many requiring stitches.

"The attacks often lead to nasty injuries, including hefty bumps, cuts and scratches," Purmerend leaders said in a written statement.

Friday, a falconer captured the owl, moving it to a temporary aviary until a suitable home is located.

"The municipality had planned to leave the bird alone, but the attacks were more intense," city leaders said. "Many residents in the area were anxious to go on the street."

The bird is one of the most common and largest species of owls in the world. While it is a protected species, city leaders received a special exemption to relocate the creature.

Another dive-bombing owl in Oregon has led park workers to recommend people wear hard hats between dusk and dawn during nesting season.

Los Angeles, CA - 1/10/2014: I was at my boyfriend's apartment and we were leaving his apartment to get in my parked car that was in the alley next to his building. We were sitting in the car listening to music and talking with the sun roof open. So then we started to look up at the stars and we both seen about 10 or so black flying helicopters or something flying in a V like shape. The black flying objects kind of looked like birds because they were small but they were moving too fast and it was about 10pm at night to be birds. So then the black objects flew off into the distance. So we both got out off of the car to get a better look at the sky and that is when I saw a reptile bird like creature with feathers and wings. And I knew that is was a bird because I could see the wings flapping like a bird but also the feathers were blowing in the wind. The creature was like a pterodactyl because it was huge and it look like a mix of reptile and a bird. I only seen the bird for less then a minute and it flew off behind the apartment building. The weird thing about these sighting are that I also seen another flying object at the same location. But it was about a year earlier. I seen the other flying object in the same way around the same time in the car in the alley next to the new carver apartments in downtown los angeles. This flying object was different from the black objects and the bird like creature. It was brown moving in a waving motion or moving like a snake in the sky. It was also like a hover craft because it looked like it was floating in the sky. Once my boyfriend and I saw this object it shape-shifted into the color of the sky. And we both could feel the energy of the flying object it was almost like the flying object knew we were looking at it. But we could still see it in its cloud form. After less that a min of looking at it somehow we lost sight of it. - MUFON CMS

Here's What Richard the Lionheart's Heart Looks Like Now

This Chemical Reaction Made People Think Satan Was Attacking

The Lost City of Z: A Tale of Deadly Obsession in the Amazon

The Mystery of the Shemitah: The 3,000-Year-Old Mystery That Holds the Secret of America's Future, the World's Future, and Your Future!

Strange But True, America: Weird Tales from All 50 States