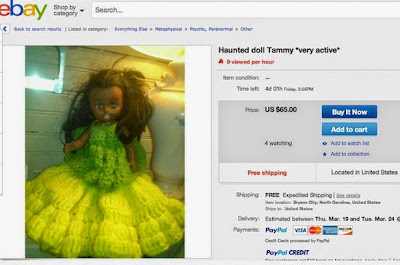 Do you enjoy the cold, dead eyes of your doll collection but find you’re still sleeping too well at night? Well, all you aspiring April Ludgates out there will be happy to know that for just 1,000% more, you can purchase a doll that is certifiably haunted, guaranteed nightmares or your money back.

According to a NPR report (which piggybacks off this report by Vice), the online market for possessed puppets is alive and well, which is more than you can say for the poor souls caught between this life and the next:

Jak Hutchcraft, who wrote about the phenomenon for Vice.com, says he stumbled upon the trade one night when he was surfing around the “Everything Else” section of eBay.

“There was an advert for something which was a sadistic, perverted, haunted doll,” Hutchcraft says. “It was this little, menacing-looking sort of troll.”

Intrigued, he noted that the bids kept going up, with 10 people in the running. That doll that looked like a possessed little troll sold for more than $1,400.

And what do all those G’s get you? “The opportunity to connect with the spirit,” invigorating indoor wind, and maybe, if you’re lucky, your own IRL version of “Child’s Play.”

“The day I got it back home I put it in the cabinet in my basement and closed the door,” [haunted doll trader Jayne Harris] said.

“Five minutes later, when I was upstairs, I heard a bang. A tin of paint had fallen and smashed the cabinet, and there was paint all over the floor. The doll was just sitting there. It looked really creepy.”

Jayne explained that she then started having headaches and was finding it hard to sleep, which are both signs of demonic possession.

“Days later, my three-year-old daughter started saying, ‘Shhh, mummy, John is asleep.’ When I asked who John was she told me he was her friend. I thought, OK, children have imaginary friends, it’s not unusual. Then, a few days later, she came running into the kitchen crying and said, ‘Mummy! Mummy! John shouted at me…’ This made me feel really uncomfortable, so I passed the doll onto my medium friend, Hazel.”

Hey, you’d be pissed off too if you were forced to spend all of eternity getting dragged around by grubby children or bought and sold like a commemorative plate by pinwheel-eyed ghost groupies. But with all the haunted dolls on the market, how do you know if the haunted doll you’re buying is legit?

Despite my initial skepticism, it seemed that her operation was legit: Her buyers were very happy, with nearly all of them confirming the dolls’ haunted qualities.

Well, that settles that!

For more info on this fascinating subject, Google “how to buy haunted dolls on eBay” and let the sage advice wash over you. - DeathandTaxes

This is the end? Pope gives up cryptic hint

An author who successfully predicted Pope Benedict XVI’s resignation now is suggesting Pope Francis may be a believer in an ancient prophecy that foretells disaster for the Roman Catholic Church.

The pope unleashed an international frenzy of speculation when he recently commented, “I have a feeling my pontificate will be brief. … It is a vague feeling I have that the Lord chose me for a short mission.”

Bestselling author Tom Horn, featured on the blockbuster movie, “The Last Pope?,” told WND in an exclusive interview that the statements imply the man once known as Jorge Mario Bergoglio sees himself as part of a prophecy.

Horn stated, “The comments by Pope Francis regarding possible assassination or retirement and that he may not be the pontiff much longer make me wonder if he is a believer in his role as the last pope (pope No. 112 in the ‘Prophecy of the Popes’), which speaks of the destruction of Rome.”

St. Malachy’s “Prophecy of the Popes” is said to be based on his prophetic vision of the next 112 popes, beginning with Pope Celestine II, who died in 1144.

Malachy presented a description of each pope, culminating with the “final pope,” “Peter the Roman,” whose reign would end with the destruction of Rome and judgment. Read more at This is the end? Pope gives up cryptic hint

Robinson, Texas: I was around 10 yrs. old during the most significant event, but I believe there were others. I don't remember seeing a spacecraft. I saw the entities only. Here is my story of the most significant event that I have conscious awareness of. I slowly opened my bedroom door to peer out and investigate the dynamics of my situation. I was well rehearsed in the exact characteristics of every bedroomdoor I ever lived in due to my daytime practices opening and reopening of the door for a reason unknown to me. My bedroom was in the middle of the hallway with the bathroom diagonally across the hall. My parents and brothers room was to my right and further down the hall with the living room and subsequently the kitchen being to my left. I could turn on the kitchen light without anyone noticing I was there because the light from my bedroom was just strong enough to illuminate the way without alerting any one of importance to blowing my cover. Simple enough right Wrong I quickly moved down the carpeted hallway and passed a small front door foyer to my left. The hallway opened up into a huge sunken living room requiring me to step down walk a few steps and step back up to my left and into the dining room and kitchen combination. The light switch was just to the right on the wall as you step up into the dining room. I was reaching for the light switch when I saw it. A bright green hazy glow in the corner of the room. I focused my terror filled eyes on it and I saw what appeared to be a skull like thing floating in the air. The dining room table was directly in front of it and I think I saw the slim body portions behind the table. - MUFON CMS

Something that concerns every single one of us is how we will deal with health issues in the event modern medicine and Western doctors are no longer available to keep us well. This goes far beyond current health woes because, as you know, stuff happens and someone that is perfectly healthy one day may be stricken with a health-related malady the next.

With that introduction, a few months back I decided to explore whether the use of essential oils could help manage high blood pressure during times of trouble. From the get go, I will tell you that managing blood pressure with essential oils is a very personal quest. My own, traditionally perfect blood pressure, had suddenly taken a leap from 120/80 to 160/90 and higher. I was not a happy camper.

The 51-year-old single mother began the mammoth task of remembering every word in the 2,548-page book to help her earn enough money to look after her autistic son.

A university lecturer and translator, Li has been studying the dictionary every day from nine in the morning to five in the evening since August 2013 and can now recite the definitions of practically every word, a skill that has proven extremely useful.

Now Li is hoping to apply her skills to the Chinese game show "The Brain" which she says is her biggest dream as it would give her the opportunity to further challenge herself.

"No matter what you must move forward." - ChinaTopix

The Lost Phantom Island of Ireland

A Close Encounter or a Visitation?

Mammoth Encyclopedia of the Unsolved

Strange But True: From the Files of FATE Magazine

Technology of the Gods: The Incredible Sciences of the Ancients