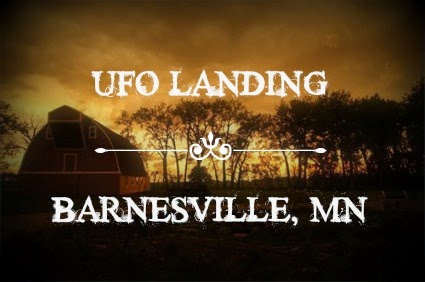 Early on the morning of May 5, 1964, farmer Alfred Ernst, of Barnesville, Minnesota, drove his truck up to his grain drill. He got out and began loading the drill for the continued wheat seeding of his land, which had begun the day before. He stopped for a moment and surveyed the flat prairie that was his farm, about six miles east of Comstock. Then, at 8 a.m., he saw a UFO on the ground.

"It was a glowing oval object approximately 1,500 feet away," the former Barnesville Mayor told Norman Mess, NICAP Minnesota Subcommittee member. "It appeared to be about three to four feet long and almost as wide."

The witness, in a later telephone conversation with Dr. James E. McDonald, said the object was "like the tub of a washing machine, round-bottomed." There was a bright glow to it and it was "hard to look at."

Ernst saw the object as it was taking off. It rose quickly and disappeared into the clouds in five seconds. The witness said he felt "rather uncomfortable" when the UFO disappeared. 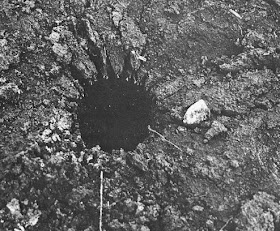 The farmer then drove to the farm of his brother, Leo A. Ernst, and the two men returned to the landing site. There they discovered a crater-like depression about three feet in diameter. At the center of this depression was a hole about three or four inches in diameter. Four other holes approximately one and one-half inches in diameter and two feet apart formed a square around the central hole. The depressed area was unusually dry.

Around the rim of the depression a white substance, later analyzed as alkaline, was found. Ernst said the black soil in that area did not contain alkaline.

WDAY-TV, of Fargo, North Dakota, took an unusual interest in the report and sent a man to investigate and obtain photographs of the area. The results of this investigation were made public on Dewey Berquist's weather program.

"The holes are exactly the type I've seen many times and I'm sure they were caused by lightning," Berquist wrote NICAP. "I believe Mr. Ernst saw an uncommon phenomena called 'ball' or 'globe' lightning." 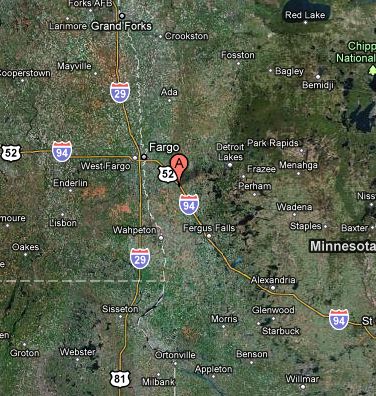 The witness himself does not agree. Nor does Dr. McDonald.

"While I was quizzing [Ernst] about the state of the weather," Dr. McDonald said in a report to NICAP, "he made reference to the ball lightning explanation and said that was quite unreasonable. He pointed out that he and his father and grandfather had farmed in that area (his grandfather homesteaded there) and nobody in the area had ever seen any fireball or ball lightning or anything like that before... . Having heard directly from Ernst his description of the very precise pattern of the holes, which obviously impressed him greatly, and adding that to his description of the weather, I would say that any type of ball lightning hypothesis will not fit the report. I would say that this is a fairly strong case."

The Arizona atmospheric physicist said thunderstorm activity is needed to produce ball lightning, but "there is no mention of any thunderstorm occurring at the time, nor does any of the material indicate lightning activity."

"It is true that lightning sometimes makes a hole or tear in the ground and it is also true that when it hits sand it vitrefies the sand, but I would not be satisfied with Berquist's easy explanation of the holes on such a basis, in view of the reported geometric pattern... .

"Ball lightning fairly frequently ends by exploding (occasionally with damaging force, usually just with a loud noise). One might hypothesize that the hole which Ernst reported was due to explosive termination of a lightning ball; however, then one would be left high and dry with respect to accounting for the ascent of the luminous mass. If, alternatively, one argued that the hole was made by an ordinary cloud-to-ground stroke which then generated a lightning ball, it would be unreasonable to think that Ernst could have failed to hear a very loud crash of thunder. No mention of any such thunder is made." - NICAP - Strange Effects From UFOs, A NICAP Special Report

True UFO Accounts: From the Vaults of FATE Magazine

The M-Files: True Reports of Minnesota's Unexplained Phenomena (Tales of the Supernatural)

When Saucers came to Earth: The Story of the Italian UFO Landings in the Golden Era of the Flying Saucers