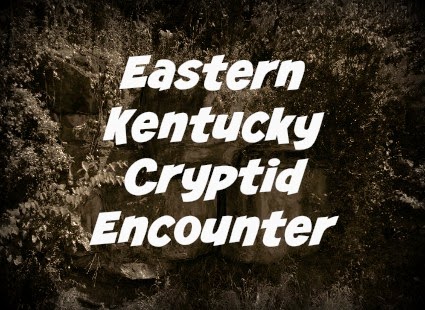 I received the following inquiry from a man in eastern Kentucky this past weekend:

I recently read your article about the Paintsville train mystery which I thought was curious. I had heard about this about the time it happened but never really thought much about it until I read your article. I've lived in the area for my entire 67 years and I believe it's safe to say that there are lots of unexplained stuff going on.

I worked for Johnson County Road Dept. for 27 years and heard many stories along the way. UFOs and ghost tales take up the bulk of these stories, but there have been a few that just make you scratch your head. Justly, I didn't go along with what I was hearing. But when it happened to me, then I figured that maybe there be something to those other stories.

It was February 2000 about mid-morning when my co-worker and I were driving on Tutor Key Rd heading east. It was snowing and we were servicing the roadway. It had been snowing all night and we had been out since around midnight, but we were keeping up with the snowfall and the surfaces were looking good. We had just passed Hanner's Branch Rd and were going near where the power line crosses above the road. Then I noticed something real big jump out of the ditch on our right and run across the road. There was a 10 ft rock face on the other side of the road. It jumped and pulled itself up and over in just a few seconds. We both got a good look at it but neither of us had any idea what it was.

Now I've never believed in Bigfoot and I still have my doubts. But I have no notion of what we saw that morning. It crossed the road about 50 feet in front of us and it moved like a human. We figured it was about 6 1/2 ft high and covered in black hair. When we saw it jump the rocks, we did notice the shoulders were real wide and the legs were kind of short but strong. The head looked to be smaller than a human and we didn't see the face. It was not a bear. I've seen many bear and this, whatever it was, did not resemble a bear. On the other hand, I've looked at many pictures of Bigfoot and I can't say any of those matched it either.

I've talked to a few people I know about what I saw that day. Most say it was probably a Bigfoot and that others have been seen in this part of Kentucky. One of the guys at county animal control told me that his neighbor saw a Bigfoot digging through a trash pile one winter. He saw the large foot tracks in the mud the next day and that his dogs wouldn't go near there.

I decided to write to you for your viewpoint. I've lived on my farm for over 20 years and I have never seen any evidence of a Bigfoot or anything that large. Thank you. JD

NOTE: I contacted JD this morning and found him to be very genuine and sincere. He forwarded a few Google Map images (below) depicting the rock wall and the road where he and his co-worker had theie sighting. I'm fairly sure that this was a Bigfoot...possibly a younger male. JD told me that he has heard of other Bigfoot sightings in the area. He's still unconvinced that Bigfoot exists, despite his encounter. Lon 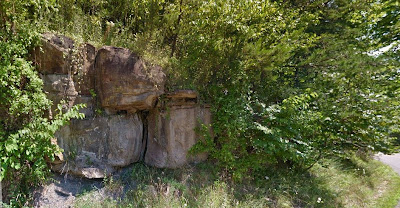 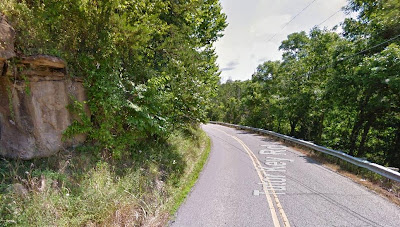 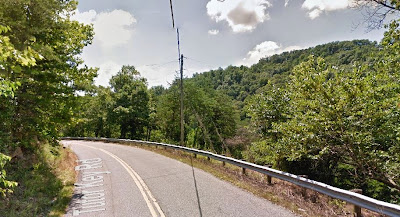 Squatch Watch and Other Stories