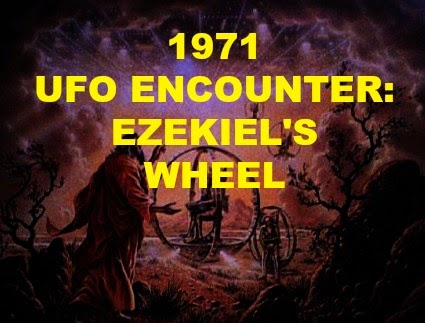 "I saw a large glowing orange craft over a park near a house we rented in Portland, OR. It was huge and had the appearance of a molten metal disk. It appeared hot (like molten metal would be) but didn't radiate any heat that I could tell. The craft sat in the air unmoving for some time but left very abrubtly moving quickly almost straight up. If the craft had terrestrial qualities it's size and dimensions would have killed me when it left, leaving a crater larger than the park from the suction it would have caused. There was no perceptible effect on my surroundings as it almost instantly went from dwarfing the park to a speck of light in the night sky." - Witness

The Bible talks about an angel (in) a wheel within a wheel. With eyes all around it. Wherever the eyes went that's where the spirit of God went. I'm not trying to claim the craft is biblical in origin or nature, but what I saw somewhat fits the description. Just thought I'd mention it." - Witness 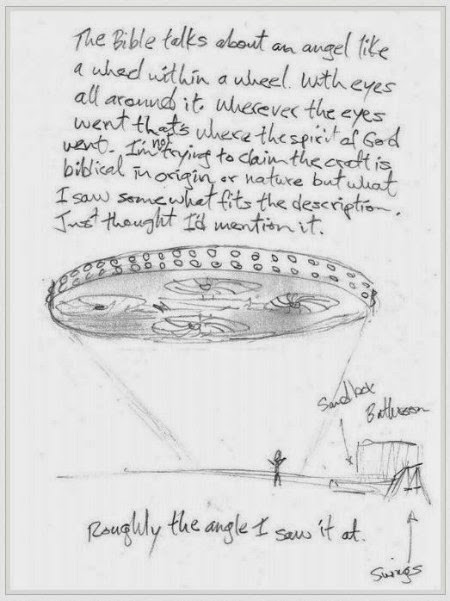 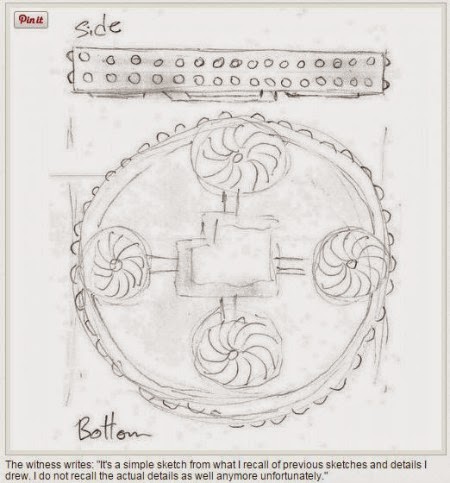 It was glowing orange like molten metal, disk shaped like 2 quarters stacked on top of each other but with no seam on the side. The sides of the craft had semi-spherical rivets in two rows that followed the edge of the craft. The rivets also glowed like molten metal but had a darker swirling quality to each one, like oil moved about slowly in water. The bottom of the craft had an irregular box shape in the middle with 4 tubes coming off of it to what appeared to be 4 rotors. The rotors spun but I could not distinguish an opening in the craft. The craft appeared solid and very heavy. If it had been made of molten metal it would have weighed thousands of tons. It's size and shape seemed to defy physics entirely. I could not imagine what forces could keep such a bulky craft suspended in the sky.

From my perspect the craft occupied at least the space of my arms outstretched at my sides and bent upwards at 90 degrees at my elbows. It almost filled my entire field of vision but left some space around the sides where I could see the night sky. I would say it was about 200 yards across the object. The edge of the craft was perhaps 2 stories tall, maybe more. I can't tell for sure though because I don't know how far it was from me, perhaps a hundred feet or so.

I was very young and my mom needed to head to a PTA meeting for my school which was across a park to the East of where we lived. It was sometime in summer because the nights were still long. I asked my mom if I could go with her as far as the park and would play on the swings, etc. until she got back. Shortly after she departed I saw a large circular craft above the park. It filled the night sky. I believe it to be roughly the size of the park (if not bigger) which had a baseball diamond in the NE and a playground in the SE. Most of the rest of the park was grassy with trees in the SW. Anyway, the object was huge, glowing orange, with the appearance of swirling molten metal. It was circular and disk-shaped, not spherical. Picture 2 quarters stacked on top of each other with no seams on their edge. The side of the craft had many half-spherical protrusions which looked to me like rivets but were more likely windows or some sort of sensory aparatus. The craft appeared unimaginably heavy and wasn't what I would call aerodynamic. I was puzzled about it's appearance and looked at it as long as I could. I was still standing there looking at the night sky when my mom returned. I was startled that she had returned so soon and I asked her if her meeting had been cancelled. She said no, it went on for about and hour and she mentioned that she had gotten to speak with my teachers and had had some cookies or other sort of refreshments. She asked what I had been doing the whole time and I told her that I had been playing a bit on the swings, which is what I had done prior to my seeing the craft in the sky. Her leaving for the meeting and returning seemed only like a matter of minutes to me. I cannot account for roughly an hour during my sighting of the craft in the sky. I have seen other instances of what I would consider UFO's, stars stair-stepping in the sky then moving off rapidly at an angle, but nothing as detailed or as large as this. I heard reports of a burning weather balloon the following day on the news on the radio but they said that nothing of the balloon was found. What I saw could not have been mistaken by anyone for a weather balloon or anything else. I did remember the report of the balloon though because I associate it with my experience from the previous night.

Can sighting be explained as any conventional man-made or natural object?

Absolutely not. All of the qualities of it seemed contrary to what I would expect from an earthly craft. The only thing that would make it seem to function like anything I've seen before were the rotors. And I couldn't even imagine how those could support such a bulky craft without adversly affecting my surroundings. Not a breeze was stirred up by the craft even as large as it appeared to be.

Network Administrator for a company of about 120 employees. Some college but no accreditation except an MCSE. I have worked in mostly computer-related positions since college.

Views on UFOs, before and after sighting:

I would say I knew little if anything about UFOs prior to my sighting. I had probably seen a few tv shows or movies about martians and outer space but nothing like what I saw.

Outside of the sighting itself the thing that puzzles me most is the duration. It appeared to only last minutes and when my mom returned from her meeting I was startled. I didn't expect her to return so soon and could only think she had come back immediately. When she said she had attended the whole meeting and then came back I couldn't figure how a few minutes on the swings plus a few minutes of watching the object would take up more than an hour. I have since then heard about abductions but I don't recall anything but standing there until she returned. 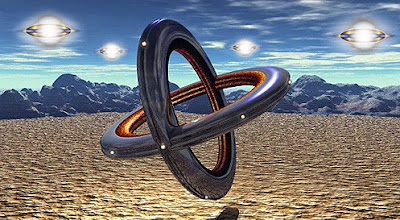 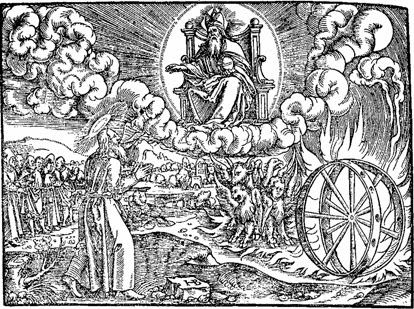 Children of Ezekiel: Aliens, UFOs, the Crisis of Race, and the Advent of End Time

UFO and the Bible

Once Upon A Missing Time